This was second down and nine and this was the first time the defense was on the field in the second half. New Mexico is in Pistol formation, 21 personnel, which is two running backs and one tight end, on the far side of the field. I'll fully admit that I'm not the best at reading defensive coverages, so any assistance is of tremendous help. Texas Tech is in it's base coverage, although the linebackers are really shifted over to the strong side of New Mexico's formation. I believe it is LB Terrance Bullitt that is lined up on the outside shoulder of the tight end. Also note that CB Bruce Jones, at the top of the screen, is giving the New Mexico receiver a 10 yard cushion, but to the weak side of the formation, the cornerback is within 5 yards. 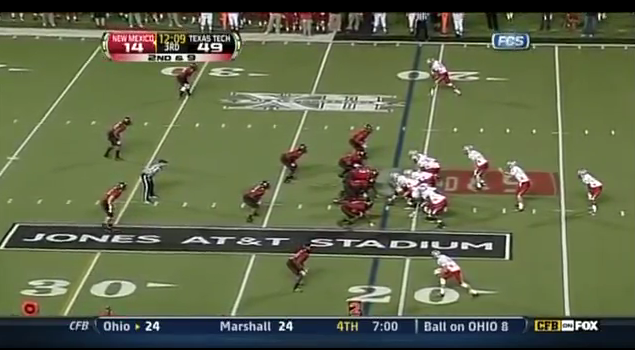 I forgot to take this note, but I believe that the up-back flipped to the quarterback's left side pre-snap and now the New Mexico quarterback is essentially looking at his options in terms of a zone-read with the tailback being the quarterback's last option. Notice a couple of things, the first being that the left defensive end is double-teamed which means that the linebacker is filling that gap. Also note that LB Will Smith is floating and reading the quarterback and DE Dartwan Bush is open and is about to take on a pulling lineman, but he hasn't crashed all the way inside of the play. The weakside linebacker (couldn't tell the number) is also diagnosing the play and is about to step up to the line of scrimmage. I think his responsibility is the quarterback. S Cody Davis goes from 10 yards deep to about 7 yards deep pretty much after the snap. He is reading this quickly.

This is assignment based defense. 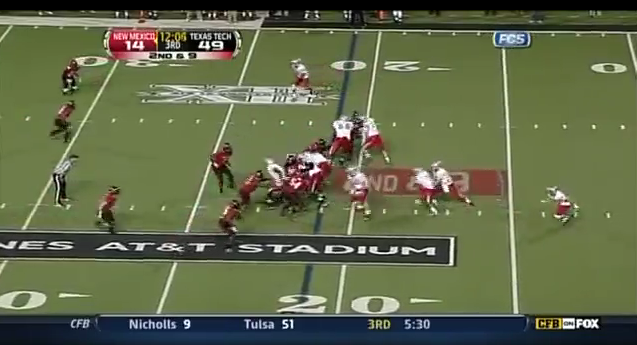 The last screenshot is that weakside linebacker taking the quarterback, along with Bush and not getting at all fooled by the fake to the up-back. Davis has the tailback, but the New Mexico quarterback has kept the ball too long and is now out of options as the Texas Tech defense has swarmed to the ball. 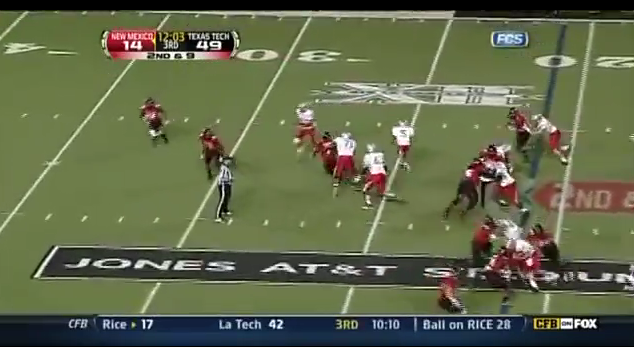 We'll cover the very next play, which is now third and long, on Thursday.