I wish I could do this on a more full-time basis, but it's tough to write the previews and also look back at the last week's game. With an off-week, I thought this was a perfect opportunity to look back at a couple of plays that I found interesting, two from the offense and two from the defense. None of these plays were particularly spectacular, but rather I thought they had something interesting that we could look at. We'll do a play a day to help fill the void. I also want to give a big shout-out to the person that is uploading all of the games to YouTube. I don't want to call attention to you, but you know who you are and it is appreciated.

The first play is TE Jace Amaro's first touchdown catch right before the end of the half. So what we have here is shotgun with 20 personnel. That means that there are two running backs and no tight ends. Although I didn't catch this in the pre-snap motion, it's important to note that the left running back, RB Kenny Williams, goes into motion to the right. Amaro is the inside receiver on the bottom of the screen grab. Also note that New Mexico appears to be in a cover-2 in the defensive backfield and safety on Amaro's side is to help with coverage and Amaro should have two men on him the entire play. 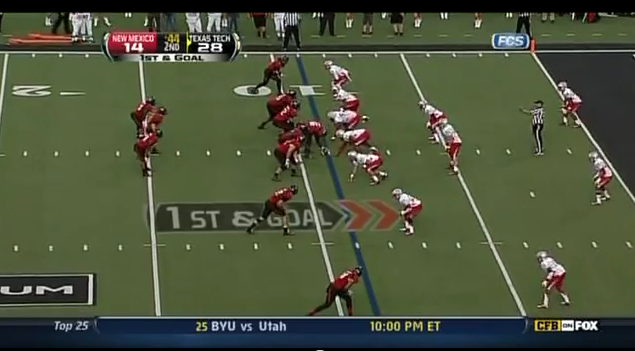 This next screen shot shows Williams in motion on the right side, but there is literally no one covering him or is within 10 yards. The offensive line has created a nice pocket for QB Seth Doege and from the looks of the play right now, Williams is the best option because there are two defenders on Amaro and the receiver at the top of the shot is double-covered as well. 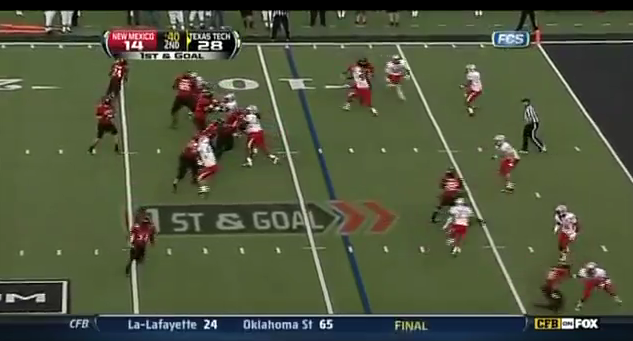 The rest is play-ground material. Doege doesn't like his options so he lets the play develop. Notice that Williams is still wide open at the bottom of your screen, but in this shot, Amaro gives Doege the high sign to go deep. The safety has bit on Marquez coming up in the middle and is watching Doege rather than knowing that Amaro is getting behind him. Now that Amaro had separation with the cornerback and the fact that he is most likely seven inches or taller, Doege just lobs the ball up into the back of the endzone. 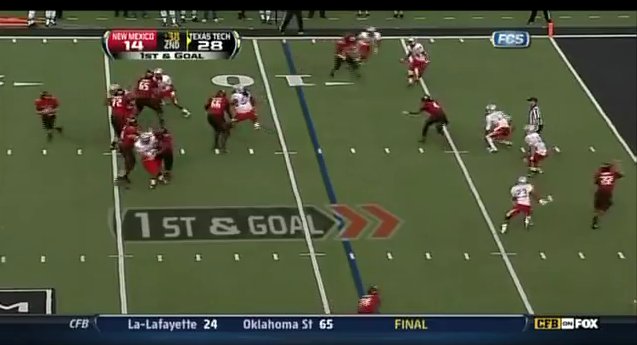