Rules of the Road for Double-T Nation

Share All sharing options for: Rules of the Road for Double-T Nation

It is nearly the start of a brand new football season and you have finally taken the leap and have decided to join Double-T Nation. I'm sure that you have questions. I have answers.

What can I do? Well, you can comment on a particular post, you can write a FanPost or Fanshot.

What should I know before commenting? Generally speaking, there are just a few rules:

The last item is relatively new and really important. Previously, people would post links where other websites were illegally streaming games. I can get into a lot of trouble it you even just post the link. Don't do it. Please. I'll delete the comment and send you a warning, but if you do it again then you're gone. It's that big of a deal.

The name-calling is a big thing with me and I've always thought that when you call people names you've resorted to no longer having a conversation. This applies to ANYONE and EVERYONE. This includes people on DTN and people in the world that you do not personally know. It doesn't matter. DO NOT CALL PEOPLE NAMES.

You should also know that I'm a big proponent of letting you all say what you want for the most part. This doesn't mean that you get to yell "First Amendment Rights!" when I do ask you not to write something because I’m not a government entity. Still, there is a long leash to have an open conversation about a lot of things.

One more thing, the general concept of any community is to be nice and respectful like you were having a dialogue in front of each other rather than over the internets. This is a request, but if you fail to heed my request, then that’s grounds for just letting you go. Be a good human being on DTN. For the longest time, the only rule was, "Don’t be mean". I had to expand on that initial rule, but I try to keep the rules to a minimum. Joking around is fine, but there is never a reason to treat someone poorly. If someone is trolling, then I’ll take care of that, but that doesn’t mean that you need to respond and make matters worse.

Bottom line, even though most of the comments are anonymous internet people, I’m still going to hold you accountable for what you say.

Don’t be a bully.

What about comments? If you like a comment, you should "rec" it. If you find a comment, you should "flag" it. I know that a lot of folks do the +100 or whatever, but I’ve always liked the "rec" option. You can get to the "rec" or "flag" option by clicking on actions and then choosing "rec" or "flag". If you choose the "flag" option, it will ask you for more detail as to why you are flagging a comment, if you find it offensive or if you think it is inappropriate or if you think it is trolling, etc. I would also say that once you start writing, "Just saying," you probably don't have anything left to actually say. We get that you are making a comment. It is incredibly obvious.

There is also a Formatting Guide on each comment. It is to the right and right under the subject blank. Go ahead and click on it. There's stuff there that you've probably wondered why your comments show up funny. Since I know that you will not click on it, here's a screen capture: 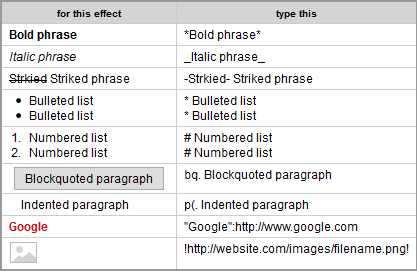 I would also ask that you make sure and "size" your photos. What that means is when you insert a photo, add the following: height="200" . This will limit the height to 200 pixels, which is better than some original sized photos that are gigantic.

What about FanPosts and FanShots? A couple of important things. Make sure that the title to your post is clear what you are writing or linking about. If the title to your Fanpost is "Tech Questions" you have no idea if the FanPost is asking a question or maybe answering a question. And the ambiguity is most likely not going to lead people to want to click on it. From an administrative side of things, we are constantly told to make out titles as clear as possible. I’m not always successful, but I am conscious of it.

Try to write as best you can, using the best grammar possible. I am not perfect, I don't expect you to be perfect, but give it a good effort. Do not use "words words words" to meet the 75 word minimum for a FanPost. If you can’t write 75 words then it should be a FanShot and starting today, I’ll be deleting those posts especially after games. There is no need to be first, but there is a need to be coherent.

Also, there is no reason to post a FanPost about you joining or leaving DTN. I appreciate everyone’s contributions, but announcing your arrival isn’t necessary, just join and start commenting. Announcing you are leaving also isn’t necessary.Maybe you could just leave a comment and not make a big deal out of it. Feel free to shoot me an email if you have a reason why you are leaving. I get them all of the time, for various reasons. We reserve posts about leaving the community to guys like SARR.

What about the community? Seems a bit intimidating? Well sure, all new communities do seem a bit intimidating. There are users on DTN that comment more than others, but you’ll find that most are pretty friendly and we like jokes. I fully admit that I’m not humorous at all, which is why I don’t try to be funny for the most part. You just have to get over that initial fear and start making comments. I will say that if your first FanPost is to criticize the logo or to sue me for defamation, you’re probably not going to last long.

What about Mystery Yelling Face Painted Girl (MYFPG)? MYFPG has been around for a while, and I saw her photo on the LAJ, I think after a game with Nebraska and I thought she would make for a terrific muse for our game day threads. It worked great in 2008, but I’ve had to scrub that photo from DTN because the photo isn’t mine.

The long and short of this is that I am not permitted to use anyone’s photos other than the photos that are generated in the photo editor when I post or photos that I take on my own. I’ve had to scrub all of the photos that I had previously uploaded. I don’t want to get into trouble. In fact, I can't even post a reply-comment to an unauthorized photo.

She’s gone, so we have to start a new tradition.

One possibility is for this to evolve, but because someone needs to start things off, I’ll do that. You can get in on the ground level, at least for the first game. As some of you know I adopted a little boy from Ethiopia and he was a little under two years old when we adopted him. His name is Fitsum. We celebrated his second birthday and we had cupcakes for his birthday. The kid loves cupcakes. When Fitsum has cupcakes, we all win. This photo could be posted after a win. And when Fitsum doesn’t have cupcakes it’s not so pleasant. In fact, you might even say that it’s a little bit sad and depressing, while being angry all at the same time. This photo could be posted after a loss. You get the idea. We have to start something new.

I can still post GIF's because they are bits from a broadcast and I think those fall under "fair use" for those people wanting a somewhat technical explanation. As another suggestion, We can also use this GIF after a win, which has been standard and I really like this guy because his name is Big Phil:

We could use this GIF after a loss:

You can really do what you want, but the idea is that I can't post MYFPG any further. Lawyer's ruin all sorts of fun shit.

Where are you on the whole Leach thing? To be very brief, I loved what Leach did for Texas Tech. The whole episode with his termination is still upsetting to me, but he is the coach of someone else’s program. And I’d also add that I’ve been pulled through the ringer with Leach, more than you will ever know.

So this must mean that you won’t let anyone post on DTN about Leach? Free speech! You all can post what you want for the most part, however, since it is a Texas Tech focused blog I would prefer not to read about what Washington St. does on the field as there are many outlets if you want to follow or post about WSU. Discussing Leach as a former coach (a very successful former coach) is totally fine. This is my preference and if I think it’s getting out of hand, then I might make it a rule, but for now, I’m not too worried about it. Again, for the most part, I think it’s more beneficial than not to try to focus on most things Texas Tech.

I’m so scared. Don’t be scared. It will be fine. The best advice I can give is to discuss matters as if you’re discussing them with someone at a bar. It’s better not to say anything that you wouldn’t say to someone’s face. Other than that, I think this group is a likeable bunch and although there are disagreements about things, that doesn’t mean that you shouldn’t join in the conversation. Just don’t threaten to sue me for defamation.

Damn, that's a lot of words. That's correct and I reserve the right to make additional rules.