Share All sharing options for: Recruiting on the South Plains | WR Jakari Dillard

I am as surprised as anyone about this, in fact, I mistakenly thought that this was initially a 2013 commit, which I wondered if Texas Tech had the additional room in the class. So wrong. Welcome, Princeton WR Jakari Dillard. This is really interesting, in fact, I really dismissed this a month or so ago when SB Nation Recruiting guru Wescott Eberts mentioned that Dillard was thinking about Texas Tech. I thought it was way too early to be thinking about the 2014 class. So wrong.

Much thanks to inside receivers coach Sonny Cumbie who recruited Dillard, Texas Tech now has their first 2014 commit. I should also mention that on Friday's Tech Talk with Chris Level, he said that before Dillard made his commitment to Texas Tech, Cumbie inquired if Dillard was ready to make the commitment and pull the trigger. Dillard said he was. I don't know if this makes any difference, but as Eberts reported earlier in the year, Dillard is the son of former Oklahoma defensive tackle, Stacey Dillard, who played in the NFL and obviously knows the recruiting game. Stacey also happens to be Princeton's head coach. He knows about this process and as you'll read below, it seems like they both put a lot of thought into this decision. #fingerscrossed

Just to put things in perspective, Dillard put up these numbers as a sophomore for Princeton. Again, a sophomore. Dillard had 31 catches for 461 yards and 4 touchdowns last year. Look for him to absolutely bust out this year. 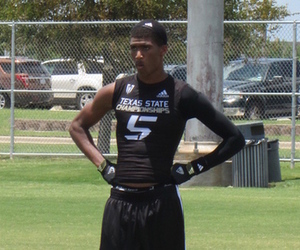 There's actually quite a bit from Dillard and Stacey. Up first is is DMN's Mike Graham via RRS.com and I want to highlight Stacey's thought process first:

"He wanted to commit earlier, but we kind of wanted him to weigh it out, think things through, and not make a quick judgment," Stacey Dillard told RedRaiderSports.com. "This isn’t something that just popped up today. We’ve thought about it, we just haven’t said a lot about it."

"When you go to those major cities like Austin, man that place is huge. Comparably, when you go out to Lubbock, Texas Tech football is the biggest thing going there and might be the only show in town," Stacey Dillard told RedRaiderSports.com. "I think that was something that really appealed to him. He wanted to go to a place where he can catch the ball too. When you look at the teams he was interested in and how far he’s willing to travel, I think Tech is as far away from home as he’d want to be. Looking at teams inside that radius, I think Texas Tech had the most positive things for him."

I don't know about you, but this is incredibly significant. This doesn't appear to be a quick or uniformed decision. And now from Jakari, via LAJ's Don Williams:

"It was mainly the coaches and the spread offense," Dillard said Thursday. "(The coaches) seemed straightforward and were pretty excited."

I don't even know if I even need to give my two cents. From SBN's Eberts from the FoxSports 7-on-7 Texas State championship:

The day of viewing began with one of the top individual performers these eyes saw, as the 6-4, 185-pounder didn't waste any time making an impact, streaking down the field on a post route and hauling in the pass for a touchdown on the first offensive play of the game for Princeton. He followed it up with another touchdown catch on the following possession, leaping over two defenders to snag the football at its highest point -- an indefensible play at this level, or any other, frankly.

Dillard didn't stop producing either, using his big frame to later secure another catch in the endzone. He consistently caught the football away from his body when it was within his frame, showing strong and natural pass-catching ability, and then used his aerial skills to consistently beat defensive backs even when he couldn't create separation.

Strong both in his first several steps and with his top-end speed (which he said translates to a 4.5 40 time), Dillard sold his double moves well and was particularly effective with a stop and go route that he would hold for just long enough out of his break to get defenders biting. Currently sitting at three offers, that number will increase quickly and significantly this fall.

I should also point out that Dave Campbell's Texas Football has Dillard as one of the top 100 juniors this year.

As for me, Dillard looks like a fluid athlete that is just probably growing into his 6'4" frame and he can probably add some pretty good weight without slowing him down. He does have speed, but I think he's still figuring out how fast he can actually be. Dillard isn't afraid to go over the middle, again a good thing for someone that's only a sophomore. The fact that he's athletic on the basketball court, blocking shots, making plays, put-back dunks, makes me think that Dillard is maybe freakishly gifted and is only going to get better with timing.

Jakari, welcome to Texas Tech and Git Your Guns Up!