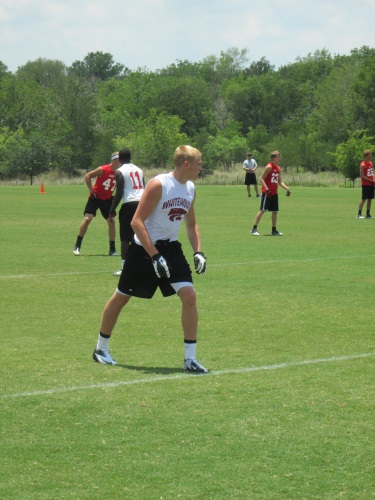 SB Nation is very much dipping their toe into the recruiting game and if you enjoy recruiting analysis that doesn't cost you anything, then make sure and check out the SB Nation Football Recruiting page. Behind these efforts are Bud Elliott and Wescott Eberts and Eberts recently watched Texas Tech commit WR Dylan Cantrell at a camp at a 7 on 7 tournament at Texas A&M Consolidated. I asked if Eberts (photo credit to Eberts) could answer a few more questions about Cantrell and he helped DTN out.

Double-T Nation: You mentioned in your write-up of Cantrell that you thought that one of his best attributes was that he had good body control and one of my initial thoughts in watching Cantrell's film is that he has terrific hands and has that unique ability to go up and get the ball over a defender? Did you get to see any of this and do you see this trait transitioning to the college game?

Wescott Eberts: I definitely had a chance to see some of those hands that you see on film, as Cantrell caught nearly everything thrown in his direction -- if he dropped some passes on the day, it was only one or two, but definitely not enough to register as any cause for concern or to establish a narrative other than what he showed on film.

As for his ball skills, I was a little bit disappointed initially that I didn't see him have more opportunities to attack the ball in the air, but in reviewing the film that his mother took on the day, there were definitely several catches where he had to elevate and high-point the football, doing so with the same effectiveness as he did in pads last fall.

I think those traits are ones that translate extremely well to the college game. Some guys struggle to run advanced routes, some guys struggle to create the same separation their speed did in high school and some guys struggle with issues like facing press coverage. But if a prospect has good hands and ball skills, those aren't things that are mitigated by better defenders -- those are mostly innate skills that stay with players throughout their careers.

DTN: With Cantrell being a fast player, but maybe lacking the quickness to get out of the blocks, do you see this as being a problem once he arrives on campus, or will his size and ability to catch the ball overcome some of that?

WE: I think his hands and ball skills will always make him an effective target because his eventual quarterback at Texas Tech will be able to throw him in open. In other words, guys that can elevate like that don't necessarily need to be "open" in the traditional sense to be able to make plays.

And, actually, after looking at that film from Saturday, I thought he looked a little bit quicker there than he did, which may sound a little bit strange, but that's what happened. Basically, he's not elite with his suddenness, but he's well above average, especially for a big receiver. Given that he'll be working against nickel corners, safeties, and linebackers at Texas Tech, I don't foresee creating separation as that big of an issue for him in college.

DTN: 3. What do you think will be Cantrell's biggest adjustment and what does he already have a head-start going into college?

WE: I like the fact that he works out at APEC in Tyler, because he has a chance to work out with athletes of similar quality who can help push him to be the best -- not to mention the tutelage of the trainers there. The facility has a track record of helping to mold some of the best athletes in the area, so he has some advantages over a lot of football players coming out of high school.

As for concerns, I'm not sure that there is anything glaring to me. I think he could stand to work on the crispness of his routes, especially those that require sharp cuts and change of direction, but overall I would grade Cantrell as someone with good polish coming out of high school and he has nearly a year to work on his route-running. I liked Cantrell a lot on film and there's no doubt that he met expectations on Saturday.