Why DTN Has a New Logo

Share All sharing options for: Why DTN Has a New Logo

Way back in July of 2011 I received an email from the attorney that represents SB Nation (I am an independent contractor, so this attorney doesn't represent me individually) which attached a letter from a law firm that represents Texas Tech University and most likely the Collegiate Licensing Company (CLC). I draw this connection because the law firm is from Atlanta as is the CLC, but I could be wrong about this. In any event, the letter said that Texas Tech owns the Double-T mark and logo, as well as the masked rider logo and the colors scarlet and black. The letter went on to say that the old logo and the wordmark, "bear logos that infringe on Texas Tech’s rights and are directly competitive with officially licensed apparel bearing Texas Tech’s Trademarks." Trademark law in a nutshell is that you must protect trademarks, because if you don't then you lose the ability to keep as your own. That's really simplistic, but that's the general thought.

Then there was a ton of back and forth between myself and the SB Nation attorney because the letter said this, emphasis mine:

Texas Tech has acquired strong trademark rights in its Double T Mark, which include a U.S. Trademark Registration (Reg. No. 2,511,968). Texas Tech fans and the public also know and refer to Texas Tech and its athletic teams as "Double T."

What I think is cray-cray is the bolded part of the blockquote, which is that the CLC believes that Texas Tech fans refer to it's athletic teams as "Double T". Again, I refer you to the licensing link and I could not find any information that says that Texas Tech owns the phrase, "double t":

So the reason why there was so much back and forth is because the CLC and TTU were claiming to own the phrase "double t" despite not having any trademark in that phrase. This is all pretty foreign to me and the last that I've left the situation is that TTU and the CLC required that I change the logo for DTN and that I'm allowed to use the name "double t" in the name of the website, but I am not allowed to use the name "double t" if I were to sell any t-shirts or other products.

As you can see at the TTU license website, it outlines the method in which I could apply for a license to use the name "double-t" (even though it seems strange to ask permission from someone to use wording that it does not appear that they own) but it's cost prohibitive, especially the insurance requirement.

The Texas Comptroller of Public Accounts website for the name "double t" there are apparently approximately 80 Texas entities that utilize some form of the name "double t" and I'm pretty sure that these businesses are in the business of making money, or at the very least they are taxable entities. These are just Texas entities as I am sure there are other businesses throughout the US that use the name "double t" in their name. I don't know if the CLC has sent cease and desist letters to everyone of these companies, but I'm guessing that they have not so I somewhat feel like I'm being singled out a bit, but I don't know that for sure.

I should also point out that I had never heard of Pinterest were it not for my wife who is addicted to this website. Apparently there are some copyright issues with Pinterest in that it is apparently all about copyright infringement. The Texas Tech Athletics department just created their Pinterest page, they apparently have no problem utilizing my photograph that I took without my permission and use for football posts (screen capture is below) or this photograph that I took and use for DTN and use for basketball posts and I'm guessing that if you scroll through every one of their photographs that they've pinned they haven't asked for permission for each and everyone one of the photographs. 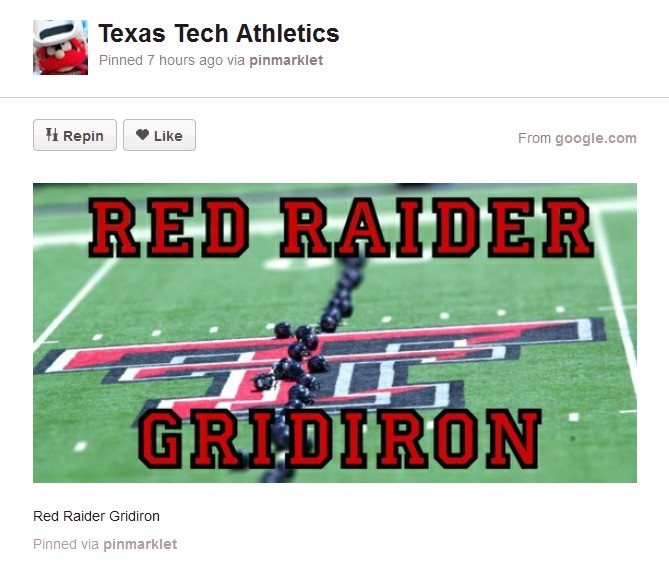 Ultimately, I was asked to take down the t-shirts, which is why you can't buy them any more and you cant buy anything that uses the phrase "double t". I was disappointed because I really liked the thought of me being able to sell t-shirts and as most of you know, the money that I made off of the t-shirts went to help with my wife's and my adoption the past two years and I was going to have future proceeds from the sale of t-shirts to go to some sort of local Lubbock charity that involved kids. I don't think I ever made a ton of money off of the t-shirts, most likely less than $100.00, but for me personally, it was appreciated as every penny helped and I am sure that every penny would help any charity.

My only other option is to continue to negotiate if I can sell anything (I don't have any control over this as I don't own the website, SBN owns the website, so they do the negotiating) or change the name of the website, which I would prefer not to do and SBN strongly opposes a change of the website and although I have asked if it's a possibility, I don't think it's a real possibility as they are concerned I'd lose out on the name recognition and Google-juice that DTN has built up over time.

So when folks asked when they can buy a t-shirt . . . well, I don't know. Seems silly to sell a t-shirt that doesn't use the name of the website that the t-shirt is attempting to promote. I don't know what to do. And just to clarify, I'm not asking for help or a handout or people wanting to fight this cause. There are much bigger things to in life that need your help, this is a minor issue that really only affects me and your ability to buy a t-shirt or a coozy.

I have been presented other opportunities to possibly put the logo on some other products, but I've had to put those plans on hold until there is some sort of resolution, which doesn't seem like is going to happen until the CLC decides to make a decision and I don't know that they're motivated to make a decision or not. I'll also say that I do not want anyone to write any angry letters or emails or anything like that. The purpose of this post is not a call to arms, but just me pulling back the curtain a bit and letting you know that I'm frustrated, but I continue to plug along. I don't think that angry emails or letters will help, but I can say now that I know that some of you would be incredibly passionate about that and it would have been incredibly appreciated.