Share All sharing options for: Five Questions | Preparing for the Red-Black Scrimmage 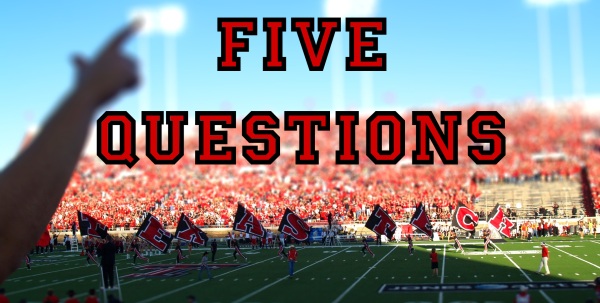 It's been so long since we've done a Five Questions and nothing screams over-analysis like the Red-Black Scrimmage. As you all know the scrimmage is set for Saturday, March 24, 2012 at 1:00 pm. The weather is supposed to be fantastic and I plan on driving up on Saturday morning and taking in some football for the last time until some time in August. That's a long time. Like a lot of you, much of what I know about this year's version of the team is only based off of media reports, but because we haven't seen the games, that doesn't mean that we can't comment. I'll try to ask questions that are open-ended enough so that it might solicit answers that you or I didn't think of and I think there's value in that. I'd also add that I'm not trying to avoid the situations regarding TE Jace Amaro and RB Kenny Williams or the situation with head coach Tommy Tuberville, those are obviously disappointing situations, but I'd very much appreciate it if we could keep this post to football related thoughts.

I think I've written this before, but the sole reason for spring football is to give fans of a team hope for the next year. Life is good, there are no wins or losses and there is much to be excited or disappointed about until the summer and fall practices begin. It's okay to be excited, it's part of being a fan.

1. WHAT HAS BEEN THE MOST PLEASANT SURPRISE ABOUT THE OFFENSE? For me, other than some false start or alignment penalties, which doesn't bother me all too much, you haven't heard too much about the offensive line struggling. Not at all thinking that the defense hasn't had their day, but as the spring practices have worn on, the offense has performed better. It's not a stretch to say that the success of a given team will be largely dependent on the success of the offensive line. This is a relatively thin line in terms of depth and so there's not a lot of room for error and young players will be playing significant roles on the offensive line. I've also very much appreciated how the defense has given credit to LT LaAdrian Waddle, who they mostly say is the toughest player for them to attack. I know that much of this is just players talking, but Waddle needs to be the leader on the line, whether it be by example or otherwise.

2. WHAT HAS BEEN THE MOST PLEASANT SURPRISE ABOUT THE DEFENSE? This one is easy for me, and it's a combination of the revelation that is LB Will Smith and the thought that the defense has had better days than the offense in the previous scrimmages. I'm not about to be the guy thinks that the defense is automatically fixed or everything is absolutely fine, but I do think that it's okay to feel a bit better about how the defense is performing better than they were last year. The more I think about how this all works, the more I think that a defensive coordinator and the assistant coaches essentially have two jobs: present the scheme and plays to the defense and put the players in the best positions to win individual match-ups. The scheme part is relatively simple, but the second part of this concept is a bit more difficult. Every player has flaws, some are more pronounced than others, but the more I think about what a defensive coordinator or offensive coordinator is supposed to do is recognize those strengths and weaknesses and exploit them. Last year, I don't think that Glasgow did a remotely good job of recognizing the strengths and weaknesses of individual players, which is why there were so many break-downs defensively. Players didn't seem to be in position to make any positive plays. I'm hopeful that a more experienced defensive coordinator can better identify what each player can or cannot do.

LB Will Smith has apparently been a revelation, and he's moved from every linebacker position to a starting spot in the middle. In JUCO last year, I think Smith played at the strong-side linebacker spot and on Smith's JUCO team, the middle linebacker ended up at Nebraska and the weak-side linebacker ended up at Baylor. I was a bit concerned that Smith looked good on video because he had so much talent around him and now, apparently the coaching staff thinks that Smith not only needs to be the leader of the defense, but he also doesn't need to come off the field. I had somewhat envisioned that Smith would be a three-down linebacker and that is apparently the case now that he's moved to the middle. I think a lot can be solved with the defense if Smith can fill one of the linebacker spots.

3. WHAT STILL CONCERNS YOU ABOUT THE OFFENSE? I wish I had heard more about the exploits of the receivers and how they're dominating the defensive backs. I really needed to hear glowing practice reports about how IR Tyson Williams and IR Javares McRoy were dominating the defense. Or that WR Javon Bell has stormed onto the scene and was making spectacular catches over defenders. I haven't read that and this doesn't mean that it hasn't happened in spurts, but not consistently. Perhaps this is the trade-off that I have to accept in that the defense needs to have some success if there is going to be any improvement, but I wrote earlier this year that the offense needs to have a dominating receiver and I don't know that this happened this spring. There's still time, and Bell was injured early and Williams had an entire year on the scout team carving up the defense.

5. IF YOU ARE ATTENDING THE SCRIMMAGE, WHAT ARE YOU MOST EXCITED TO SEE? IF YOU'RE NOT ATTENDING THE SCRIMMAGE, WHAT DO YOU HOPE IS THE HEADLINE ON SUNDAY? Like a lot of you, I'm excited about the next best thing at quarterback and after seeming him last year, I am excited to see the progress of QB Michael Brewer. I do want to see for myself if he's as mobile as I recall or if he's seeing the entire field and just settling for the underneath stuff or has he matured and is he getting the ball down the field.

I've copied the questions after the jump so that you can copy and past them in the comments.

1. WHAT HAS BEEN THE MOST PLEASANT SURPRISE ABOUT THE OFFENSE?

2. WHAT HAS BEEN THE MOST PLEASANT SURPRISE ABOUT THE DEFENSE?

3. WHAT STILL CONCERNS YOU ABOUT THE OFFENSE?

4. WHAT STILL CONCERNS YOU ABOUT THE DEFENSE?