The Summer of Keith

How a family vacation in the summer of 2008 gave me hope for a brighter future. Starring a King Fish and some lost sunglasses.

Share All sharing options for: The Summer of Keith 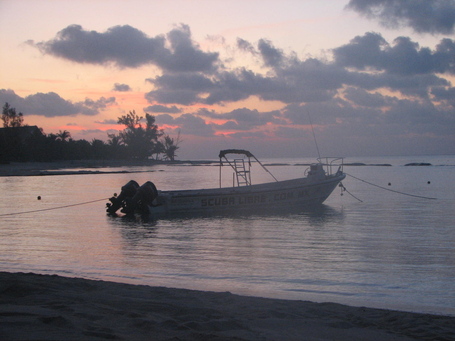 Looking back now it all makes perfect sense. In July of 2008 Kliff Kingsbury was coming off a stint in the CFL and was about to join the coaching staff at the University of Houston in the "Quality Control" department. I have no idea what the job entailed, but he was obviously very successful at controlling quality.

While Kliff was changing course the rest of us didn't see the storm clouds heading our way. That summer was the beginning of so much change for everyone and it seems like the end of an era. The financial crisis that crippled our economy was still only a theoretical possibility on CNBC. Our football team was just beginning work-outs in preparation for what would become a magical season, followed by a rather precipitous decline. So many things have changed since that summer. Almost as if a lifetime of events were crammed into the last 50 months.

That July my friends and I were a few weeks into a rather Seinfeld-esque proclamation. We decided the summer of 2008 would be the Summer of Keith.

Keith is a good friend of mine from Wyoming. Somehow he teaches Texas History, which I think is damn near blasphemous, but whatever. He's still a really good friend. We decided early in the year that the summer would belong to him and did everything we could to make it memorable. We sanctioned a pug vs. rabbit race up a flight of stairs. We had a song writing contest about mustard. We went to a Boston concert and bribed the security guards to get us to the stage during "More Than a Feeling". We started a breakfast club, which was nothing more than a naked power grab from our wives so we could drink beer and eat pork early in the morning. It was glorious. We had shirts made.

We did everything we could think of because Keith is getting really old, and we weren't sure if he could go on much longer after he turned 40. The theory was that beer and pork would be our fountain of youth, and it worked every weekend. We had a blast every day and our big finale was a group vacation in late July to Playa Del Carmen, Mexico.

Our two families were joined on the trip by our friend Antonio and his family. Antonio is a native Dominican and a self-made man. He taught himself English by watching "The Godfather" trilogy. He's introduced me to good rum and good cigars and in return I translate his broken English to everyone around the dinner table or golf course. On the trip Antonio taught us a valuable lesson.

We were staying at an all-inclusive resort and naturally as Americans we assumed that everything was covered. "I wanna banana monkey at 8 in the morning, and that bartender better be happy to serve it to me" was our mindset early on. Antonio insisted we tip at every opportunity. Leave 10 pesos on the pillow in your room. Tip 20 pesos when you get a banana monkey at 8 in the morning. Leave behind 30 pesos after you eat at the Italian buffet.

Of course we thought we were wasting our money in the beginning. "It's all inclusive, Antonio, I don't wanna pay extra for my banana monkeys", but he insisted and we kept it up.

After a couple of days we began to notice the impact. The maids were making our towels into roses or swans or some shit every morning. The bartenders started flagging us to the front of the line. We'd get a table anywhere we wanted, any time we wanted. Rose petals on our pillows and champagne in the fridge. All because we went out of our way to be a little nicer than everyone else. 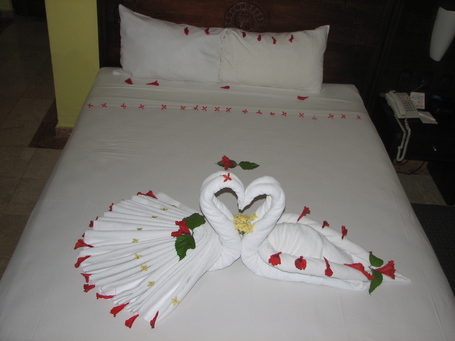 On day four or five we started walking around the resort like kings. Everybody knew us. It was like Cheers on the beach. The resort was our oyster. One bartender taught us a secret way to make a rum & coke (salt first, then ice and swirl the cup with your hands as you pour the rum). A waiter went to his house and brought me two bottles of Mexican bourbon, just because he wanted us to taste it and compare. After the tasting, and much back slapping, he insisted we keep both bottles. There was a show every night and our group started winning the dance competitions, even though we can't dance for shit. It was great to be kings.

One afternoon Keith, Antonio and I took a sailboat out for a couple of hours. Antonio was in the Dominican Navy so he knew all the stuff about the bow and the aft and the mast and the port or whatever. It was a great little trip, but somewhere out in the gulf Keith lost his sunglasses.

It was a bad deal for Keith because he'd had the sunglasses for 10 years and this was the Summer of Keith so what the hell? He shrugged it off pretty easily though and we all got to bed early because we'd planned a fishing trip at sunrise the next morning.

Antonio scheduled a small boat to pick us up on the beach and we all met before dawn. The boat had a full crew (a guy and his son) and a stocked bar (styrofoam cooler) with beer and rum. In Hemingway fashion we forced down a few beers with a shot of rum and started reeling in barracudas. The barracudas were fun to catch, but not what we were after. The crew kept everything we caught, but we wanted something bigger and weren't having any luck. We only had four hours and by hour three we were resigned to the fact that we probably wouldn't have the feast for our families that we envisioned. Then, as if scripted, Keith reeled in a King Fish on the last cast. He fought for that last cast. The crew (and his kid) said it was time to go, but Keith fought for one more cast, and we got our fish. Summer of Keith! We got our King Fish!

Our guide hauled ass to shore and pulled the little boat up right on the beach. We jumped out with our barracudas and snapped a few celebratory pictures as our guide cleaned the King Fish for us. When he cut him open our jaws dropped. Something shiny was in the fish's belly. Silver. What the hell? King fish are notorious for their attraction to shiny objects, but no way. Did this just happen? Did we find Keith's sunglasses in the belly of this fish? Is this the ultimate definition of the Summer of Keith? We snapped a few more pictures to prove our connection with Poseidon. 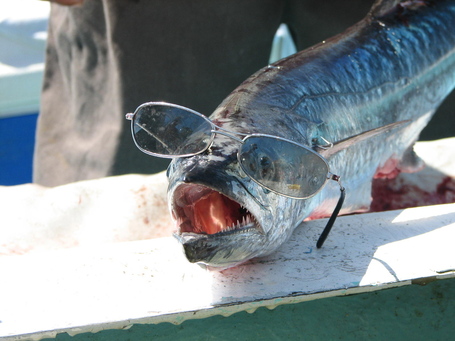 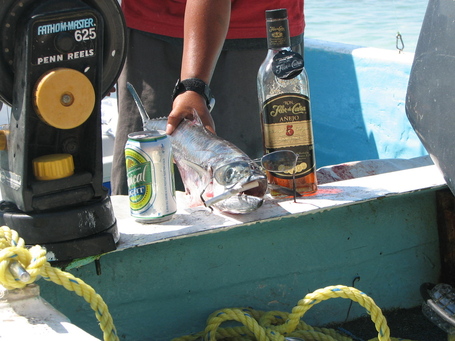 Give that King Fish another cigarette. That dude deserves to relax. 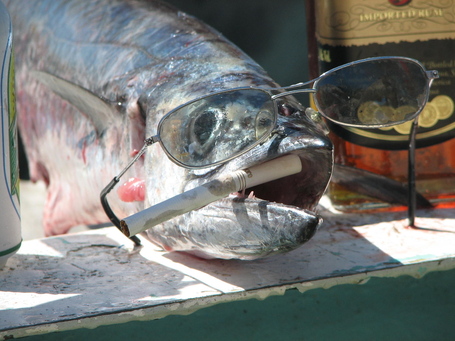 We let the King Fish finish his cigarette and enjoyed our moment in the sun. Everybody wanted to know the story, but we had business to take care of. Shirtless, we marched down to the kitchen with our King Fish in hand. As we entered the restaurant, several waiters scurried to stop us from entering (you can't walk into a restaurant with a dead fish and no shirt, even in Mexico) but they quickly realized who we were. They welcomed us with open arms and the chef came out to discuss the preparations. King Fish for a party of 12 with plantains, rice, vegetables and plenty of rum. We'll be back at 7 tonight. If we'd had microphones in our hand we woulda dropped 'em and walked out. Yes, it was that bad ass.

That night my wife had her picture taken with the Lion King, and we had our meal at our own private table in the back. No buffet tonight, we've got our own table! We kept the kid's attention as we regaled them with our stories of King Fish and sunglasses and Poseidon and all the success they would have if they just always listen to their dads who had slain the great sea monster. The night was complete when we dramatically presented the lost sunglasses recently rescued from the belly of the beast. The kids were thrilled and full of questions, but we had no time to provide details. We had the glasses! It was one of the best days ever and a perfect ending to the Summer of Keith. 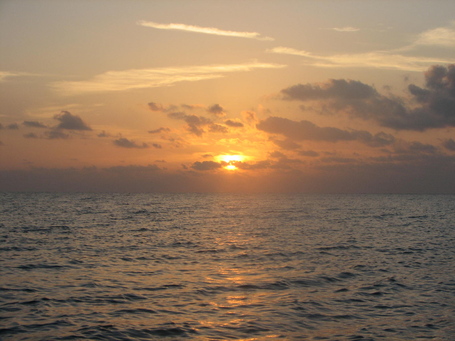 I've been thinking about that summer and that trip and that day a lot recently. Texas Tech has caught its King Fish, sunglasses and all. I still like rum and I still have my friends and we still eat pork in the morning on occasion. And for the first time in a long time it feels good to think about the future. It feels good to think about the incredible things that can happen if you always fight for just one more cast.

Kliff Kingsbury has come a long way since his stint on the quality control team in 2008 in Houston and so have we. Kliff fights for one more cast and so do we.

We've all got battle scars and stories and good things to share from our lives but for me the Summer of Keith taught me a lot. It taught me to take chances. Be nice to people. It taught me there's no harm in believing in fish stories and to enjoy your time in the sun. Most importantly, it taught me to always, always fight for one more cast.

Best of luck Coach Kingsbury. Kick some ass and have fun doing it. May you enjoy many, many Summers of Keith.