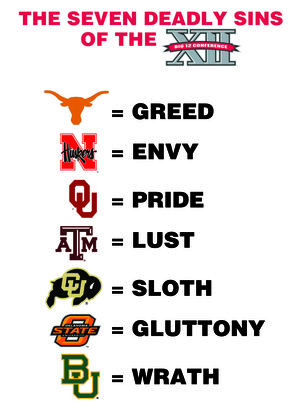 THE SEVEN DEADLY SINS OF THE BIG 12 | Big hat-tip to BOTC.

LONGHORN NETWORK | Yesterday, news broke that the Longhorn Network would be televising the Texas Tech @ Texas basketball game.  There was some confusion as to why or how this could happen and a lot of "Efff _____ for letting this game be on the LHN."  As I'm sure that some of you figured out, Texas Tech didn't have a choice.  LAJ's David Just explains, but essentially, because ESPN and FSN passed on the first tier and second tier rights, the host team, which would be Texas, had the right to pick up the game.  Texas Tech would have had the same option, i.e. to pick up the UT game had Texas Tech been playing at home if ESPN and FSN passed on the game.  This is the problem and it is so much more eloquently explained by DTN user Skin Patrol in a BON post titled, "Why Texas is doing the rest of the NCAA a favor with the Longhorn Network" (BTW, I appreciate Skin Patrol expressing himself in that post because it's exactly how I feel):

The only thing about the LHN that I am worked up about is the potential for shenanigans given that the LHN is owned by ESPN. Without the LHN, ESPN would likely broadcast Texas Tech games under their first-tier contract. If they don’t, Fox would. So in a world without the LHN, Tech games are going to be on ESPN or Fox, which will generate a lot of interest, and not just in Texas (Texas-Texas Tech was the highest rated broadcast of the 2008 CFB season).

Enter the LHN, which is owned by ESPN. ESPN now has an incentive to pass on Texas Tech games in its first-tier selection, if it thinks it will have an opportunity to select the Texas-Tech game anyways on its third-tier rights (held by LHN). Then ESPN and LHN can use a television broadcast of our games to leverage cable networks into putting LHN on their basic package. This is, in and of itself, a problem, because it means we’re losing a nationally televised game so that ESPN can gain leverage over broadcast providers, which is not otherwise of any interest to Texas Tech. But this problem is mitigating to a certain extent by the fact that Fox has second-tier rights, so even if ESPN passes, we’re still going to get a pretty good televised game… but then ESPN and Fox enter into an agreement whereby Fox will pass on second-tier rights of two (or more) games a year, so that Fox can have the opportunity to broadcast some other conference game (which may or may not involve Texas Tech).

In other words, there is a lot of horse-trading going on which doesn’t necessarily benefit Texas Tech. If ESPN and LHN weren’t owned by the same people, this wouldn’t be an issue. Tech games would be played on the LHN only if it really did fall to third-tier simply because it was an uninteresting game. Instead, we’re "falling" to third-tier because ESPN has an incentive to relegate us to third-tier games, and can apparently coerce Fox to also relegate us, by holding out a good enough looking carrot. And none of this is done, necessarily, in Tech’s best interests.

This is it, at least for me in a nutshell.  I think the only thing Skin Patrol and I disagree on is the airing of high school games, which is a big deal, but I think this is the big pink elephant in the room that no one is really talking about.  And yesterday afternoon, as I was about to leave work, I posted a FanShot of an LAJ article that was from August 1st, where Texas Tech AD Kirby Hocutt talked about not wanting to air a Texas Tech football game on the LHN.  I didn't realize until after I got home that the article was from August 1st and would not have posted a FanShot had I realized that.  The difference between Texas Tech having the option of airing the TTU vs. UT football game is that Texas Tech can choose to consent to a game being on the LHN, while the basketball game was out of TTU's control (again, Texas Tech could do the same thing with a conference game if they want).

TUBERVILLE WIRED | I don't know what you might think of me, but I actually enjoyed head coach Tommy Tuberville being wired for sound at a practice (ED.: Forgot the link earlier this morning.).  I thought it was funny how he compliments LB Sam Eguavoen's hair, which is quite impressive.

TTU VS. TXST HIGHLIGHTS | Don't know how I missed this before today, but here are highlights and comments after the Texas St. game.  And in the first few minutes, you get to see the long RB Eric Stephens run and please pay attention to FB Omar Ontiveros.  TTU is in the pistol and Ontiveros just levels a defender.  Also, on Stephens' 2nd touchdown run, Ontiveros gets a key block to allow Stephens to get into the endzone (also an excellent job by the right side of the line, including RG Deveric Gallington and RT Mickey Okafor!):

TRAVEL ROSTER | I thought this was really interesting in that travel roster was released and LAJ's Don Williams has some thoughts on what I think are some players left off of the travel roster for the New Mexico game:

I'm a little bit shocked that Fehoko is off the travel roster.  I don't like that at all as it seems like you'd be able to work in a senior on special teams, but on the other hand it seems like we want to be about being competitive and making sure that you earn your playing time.  I'm also surprised that Young is being left off the travel squad when the staff intends on redshirting Brewer.

TEXAS TECH VS. NEW MEXICO LINKS | LAJ's Don Williams profiles CB Sawyer Vest, who has moved up to the second-team cornerback.  Vest apparently comes from a family who are big into rodeo, but Vest has eventually found his way to the football team:

Vest’s path to playing time at Tech was full of detours and potholes. He rodeoed his first semester on campus, then was in and out of the football program as a walk-on for the next couple of years. Just when Vest worked his way into a possible fringe role last year, he came up two credit hours short after the summer and was academically ineligible.

"It kind of brought me down a little bit," Vest said, "but I knew that if I kept fighting and did what I needed to do that I’d have a chance coming the next year. I’m here now and thankful for that."

Vest’s breakthrough came this spring when a slew of the Red Raiders’ cornerbacks were injured or recovering from surgeries. He got snaps with the first or second team every day in spring practice, then held on to his spot when the injured players returned.

Midway through August workouts, Tech coach Tommy Tuberville said Vest "might be playing better than all of them."

So his uncle’s advice might have been on target after all.

"I’ve always told him, don’t waste himself on rodeo," Smith said. "Not only for as natural an athlete as he is, but he sees the game and has always been able to see the game."

. . . DT's Jose Rodriguez previews the game and I found it funny (I know that some of you will be completely angry over it as he also talks about the weather, but it cracks me up) that head coach Tommy Tuberville is also a agronomist:

"Their grass over there is a winter grass," Tuberville said following Wednesday’s practice. "It’s kind of a little bit more slippery — a lot slicker — than we have here. With a little rain on the ground today, it was good (preparation)."

"We’re going to try to shut down the run and make them pass," Latchison said. "We feel like we have some good things that they might not be able to pick up. We’ve had two great days of practice on the defensive side of the ball so we want to keep this momentum going into Saturday."