Texas Tech Athletic Director Kirby Hocutt: "Did we have knowledge of it? No. Heavens, no."

Share All sharing options for: Texas Tech Athletic Director Kirby Hocutt: "Did we have knowledge of it? No. Heavens, no."

Much thanks to FilemanG and London Raider for last night's FanShot (this is a partial interview and has quotes from folks other than Hocutt) of LAJ's Don Williams and David Just interview with Texas Tech Athletic Director Kirby Hocutt in regards to Yahoo! Sports' Charles Robinson story on Nevin Shapiro, the rogue Miami University booster who has alleged that he made thousands of illegal benefits to players.  On one hand, you wish that there had been different or follow-up questions, but on the other hand I applaud them for asking the questions and getting an interview.  The long story is that Hocutt had no knowledge of what Nevin Shapiro was doing outside of the realm of what Hocutt had dealt with Shapiro from an athletic director and donor relationship.  Like everything else that I try to do here, you have to make up your own mind on this one.  Here's a few quotes:

Q: Was there ever any idea that what was going on with strip clubs and nightclubs and taking kids, did anybody at the university, anyone in administration, know that was going on?

Hocutt: Being an open investigation, I probably shouldn’t say more. I want to be cordial and be as cooperative as I can. ... Those are questions that will have to be looked into and explored. Did we have knowledge of it? No. Heavens, no.

And I think the big question for Texas Tech fans was whether or not Hocutt brought up this situation during his interview process:

Q: To what extent, if any, did any of this come up during your hiring conversations with Tech?

Hocutt: There was really no conversation that came up. ... If you listen to Dr. (Mark) Emmert today, they started their investigation approximately five months ago, end of March 2011. I was introduced as AD at Texas Tech on March 2. So there was not an active investigation during the time between us notifying the NCAA of what we were hearing and, really, last Thursday.

Hocutt is right.  NCAA President Mark Emmert did say yesterday that the NCAA has been investigating for the past five months:

While many are hearing about this case for the first time, the NCAA has been investigating the matter for five months.

So at the end of the day either you believe him or you don't.  Ultimately, Hocutt says that he found out Shapiro's actions yesterday at 5:00 p.m.#

Q: At what point in the timeline, though, did you become aware he was operating outside the boundaries, so to speak.

Hocutt: Yesterday, about 5 o’clock when I read the story.

Q: So all those allegations in there were new to you?

I don't know what to tell you.  It seems disingenuous to think that Hocutt didn't know anything about Shapiro's alleged player benefits.  Anything.  And this is where it gets tough for me.  I've said it before and I'll say it again.  The one thing that helps me sleep at night is that I know that no matter who is in charge at Texas Tech, that will not always be the case.  Things change.  People quit or resign or move on to another position.  There is one thing that remains constant, which is that Texas Tech is my university.  I may not agree with what happens in the administration or coaching decisions on the field, but that doesn't mean that I don't love Texas Tech any less.

There is a reason why I will never achieve oldschoolraider's item #2 in his FanPost "Ten for Tubs":

2) Please hire Seth to be your press secretary...he will help you avoid landmines

I don't like typing this, but I think that Texas Tech views what I do here at DTN differently than how you all view DTN.  And you really don't have to look any further (yes, I'm stealing a bit) than to view the front pages of the other two websites that cover Texas Tech as of this morning: 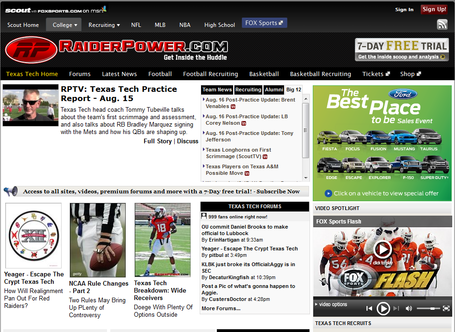 The only mention of the Miami story is on a embedded FoxSports video that most likely wasn't promulgated by the RP.com site proprietor.  This doesn't mean that it's not being discussed on their respective forums, but I'm guessing that there is a reason why it's not on the front page for both websites.  This is a huge story and has incredible possible implications for Texas Tech if it turns out that Hocutt knew, or should have disclosed to Texas Tech what was happening at Miami.  And to be clear.  I understand why RRS.com and RP.com doesn't post this sort of stuff on the front page.  If they lose their access or their jobs, then they most likely lose quite a bit.  This is their livelihood and I believe that the proprietors of both websites are employed by Texas Tech in some form or fashion.  They have families to feed and careers to think about.

But the problem that I have is that I think that DTN is labeled a bit as a renegade because we're not afraid to talk about it or discuss what's wrong with the athletic department rather than discussing what's right with the athletic department.   I don't think you'll find a more passionate group of fans that care about their university moreso than what we have at DTN.  Sometimes questioning things can have a positive outcome.  It doesn't mean that we don't love our school, it means that we want our university to be the absolute best.