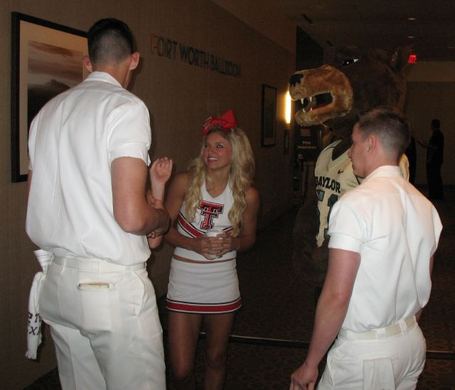 BIG 12 MEDIA DAYS
2011 Big 12 Football Media - Big 12 Conference - Official Athletic Site
The full schedule is at this link.  Texas Tech is up first thing this morning at 11:00 a.m.  There will be information rolling in all day, so I'd encourage you to follow a couple of things.  I have a Twitter list of Texas Tech folks (that haven't blocked me) that will probably be Tweeting the events.  I'd also encourage you to follow the hashtag #Big12MD.  You'll note that you're supposed to be able to watch the press conferences live and I think you might be able to watch the press conferences on Fox Sports Southwest.

Twitter / @Big12Conference
The quote from this tweet is as follows:  "spirit squads serving as media hosts in Dallas. Representatives from Texas A&M, Texas Tech and Baylor: "  If you were a media member, which host are you choosing?

RedRaiderSports.com - Notebook: LHN the focus | Tech’s rivals see what comes next after transition years | Red Raiders
A couple of summaries from yesterday from RRS.com and the LAJ.

TEXAS TECH FOOTBALL
2011 NFL Undrafted Free Agents | NEPatriotsDraft.com - Patriots NFL Draft Site
This is the absolute best site for watching which undrafted free agents are signed by NFL teams.  As you all have already noted, LB Brian Duncan goes to the Buffalo Bills, DT Colby Whitlock to the Denver Broncos, WR Detron Lewis to the Tampa Bay Buccaneers, LB Bront Bird to the San Diego Chargers, WR Lyle Leong to the Dallas Cowboys and QB Taylor Potts to the St. Louis Rams.  Congrats to all of those players!  I don't think that there are any other players that might get signed as I can't think of any other seniors, but follow that link for any updates.

Big 12 Media Days | Red Raiders
LAJ's Don Williams is back at work where he confirms that DT Lawrence Rumph and LB/DE Joe Carmical are transferring.  DE Desimon Green is supposedly headed to Hargrave.  Williams also has the practice schedule and the Texas St. and Nevada games will both start at 6:00 p.m.

Doege Leads New-Look Red Raiders into Media Day - TEXAS TECH OFFICIAL ATHLETIC SITE
This is a little interesting as I think we're going to see more articles from the official site.  I saw some time last year that Mavs owner Mark Cuban really had no use for the media any more as the Mavs could produce all of the media content necessary and questioned why he needed to credential media members (this is an extreme paraphrase and do not claim any of this to be accurate, but sorta accurate).  Anyway, I think that Texas Tech is starting to trend this way or will start to trend this way.

Rivals.com Football Recruiting - Surprise teams highlight team recruiting rankings
The first 2012 recruiting rankings are released and Texas Tech is #26, behind the following Big 12 schools:  #1 Texas, #5 Oklahoma, #16 Texas A&M and #19 Oklahoma St.  I'm surprised that Texas Tech is behind Oklahoma St. as usually the number of commits plays a part in the ranking, but it's also June 26th and its a long time until February.

BARON BATCH: Diary 31(From South to North)
Baron checks in on his trip from Lubbock to Pittsburgh.

LONGHORN NETWORK
I'm surprised that this is still news, but it's still news.  There are a handful of links, including Tuberville saying that he doesn't think the LHN isn't an advantage and Mack Brown telling you that because players are already committed to UT that he doesn't think the LHN is an advantage, but an advantage for all of the other schools.  Of course.  I also really recommend the Richard Justice link (second link), he really takes the Longhorns to task.
# Tommy Tuberville: Longhorn Network not an advantage for Texas | Dallas-Fort Worth College Sports News - Sports News for Dallas, Texas - SportsDayDFW
# Justice: Longhorn Network is more trouble than it's worth | Sports | Chron.com - Houston Chronicle
# Mack Brown defends, dishes on network - Dallas Colleges Blog - ESPN Dallas
# Live from Dallas: Missouri coach Gary Pinkel says having high school games on Longhorn Network 'ludicrous' | Conference chatter | KUsports.com
# NCAA calls summit re: college networks - CBSSports.com

TEXAS TECH BASKETBALL
The Texas High School Coaches Association game was played last night and I had not noticed the rosters (PDF), but there were a couple more names that might try to walk-on at Texas Tech, including JaCorian Duffieild from UC Randolph (YouTube and looks like he's still growing into his frame and the kid can jump!) and Jim Mills, III from San Isidro (couldn't find anything this morning).