Share All sharing options for: Multiplicity But Simplicity | Play With Great Leverage

I really don't think I understood leverage before I actually started to write about it. In fact, I had always thought about leverage and football in terms of offensive line and defensive line pad level. This is leverage, but there is a different type of leverage in football.

It really is a simple concept, but I also think it's a concept that's somewhat mis-understood by a lot of people. Here's Patterson talking about leverage and we're going to break up his quote a bit:

Every good defensive team that I have ever watched play had one distinct characteristic about them, they played with great leverage. We have one key phrase which sums up what leverage means to our players at the University of New Mexico. That phrase is: "inside and in front." In basic terms, this tells everyone of our 11 players that no matter where they are on the field, if they keep the ball inside and in front of them, good things will happen.

This is pretty important as it's clear that what Patterson wants to do with the 4-2-5 is to force each and every play inside. He wants the action to be funneled inside which is where he thinks the strength of his defense is. Remember last year where there were so many passes completed along the sidelines? What Willis was trying to do was force the passing action outside, by shading the receiving inside and giving up leverage along the sideline. Considering the athletes at cornerback at Texas Tech, this was a tactical mistake, but from a philosophical standpoint, there are only a few teams in the country that can run man-to-man coverage on each and every play. I've always thought that Willis really didn't appreciate the personnel and I've now learned the lesson that having scheme is one thing, but ignoring your personnel can have devastating consequences.

Another way to present the theory behind playing great leverage is telling your players once the ball declares inside or outside of you, never allow it to cross back across your face. What this does is cause a net effect to surround ball carriers. When we first became interested in the 4-2-5 defense, the first obvious characteristic was the natural leverage alignments. These alignments are made possible by the three safety system.

We're going to go into much greater detail later when Patterson talks about the five spoke secondary, but I do want to explain what Patterson means about how he divides the field and why the three safety system is so important. We'll get to that a bit later in this post.

From a coaching standpoint, Patterson does give some insight that the safety coach is teaching leverage to the safeties (duh) and we'll find out later that the safeties are most likely the most important players on the field. Here's Patterson:

To make the system work properly, it is important how we teach it. We decided to divide the defensive secondary differently than other teams do, with a corner coach and a safety coach teaching all three safeties. This split allows the safety coach to work on leverage as a priority along with coverage. The corners can just work on playing coverage. The natural leverage of the 4-2-5 allows five points to give us a better chance to play great defense.

Let's let Patterson start, but there are a handful of things that have been written about the split field coverage that are really informative. This goes back a bit, but remember, the defensive front and the secondary are two separate calls. Here's Patterson:

For the diagram, I am going to use a one-back set. I'll put a twin wideout set to one side and a tight end with a split receiver to the other. We call that formation spread. What determines the strength of the passing formation are the twin receivers. With the twin set left, the free safety calls read left. The free safety is going to talk to the left corner, strong safety, and the readside linebacker. The weak safety aligns on the other side and talks to the right corner and right linebacker.

Starting in spring practice, the first Monday we teach cover 2. On Tuesday we teach our blue coverage, which is quarter coverage. We are still in shorts, so we can't bang anybody around. On Wednesday we teach squats-and-halves coverage. After that we are done teaching our zone coverages.

The image that Patterson is referring to is to the right and it's simple in nature. The other thing, and this is something that we talked about in the second part of the series, is the idea that the entire defense, at least in terms of coverages, can and are taught in the first three days of practices. One day is dedicated to Cover 2, the second day is Blue and the final day is squats and halves coverages. I know, this sounds a bit confusing, but it's not all that bad.

The best explanation is from RUNCODHIT FOOTBALL (and the second part is here). To summarize, Cover 2 is when the safeties split the field in half. The Weak Safety (WS) and the Free Safety (FS) each take half a field in terms of coverage. And according to Football-Defense, the 4-2-5 makes playing Cover 3 makes a ton of sense, but this is a bit different in that the FS is responsible for the middle third of the field while each of the cornerbacks (CB) are responsible for the third on either side of the FS and the WS and FS are covering the flats.

RUNCODHIT details that your typical Cover 2 isn't necessarily something that you see in the 4-2-5, but the typical 4-2-5 Cover 2 coverage is really Robber Scheme. RUNCODHIT explains:

To summarize robber. The FS will align o/s shade of the OT and 10 yards deep reading the linemen. On the snap of the ball the FS will remain flat footed until he get his read, on a run read he pursues the ball inside out. If he reads pass, his eyes flash to the #2 WR to the read side. If #2 releases vertical past 8 yards the FS will yell "Push, "Push" and takes the WR man to man. If #2 releases out or in within 8 yards the FS will rob under #1 looking curl, post, dig.

Robber coverage involves using a safety (or two) to drop underneath of a receiver who already has a corner covering over top of him – as long as he is not needed to cover any other vertical threat.

The fact that there are 5 people in the secondary to have one of the safeties cheat up makes this interesting, but the key is that the field is still split in half.

RUNCODHIT has this, but the simple definition is that the Robber Scheme focuses on the side of the ball that has the 3 secondary members, but the other side of the field has a quasi-man type of coverage:

On the away side the WS and away corner are playing cover "BLUE". This is a type of combo man between the two of them. Both are reading the # 2 WR. If the # 2 WR pushes vertical past 8 yards the WS takes him man to man and the corner locks up on #1. If #2 releases outside within 8 yards the WS will make a "wheel" call to the corner. On a wheel call the corner Comes off and takes #2 man to man, and the WS locks up on #1 with over the top leverage. If #2 releases inside the WS will yell "IN" "IN" to the linebacker and then double #1 with the corner. The read and away sides respond differently to outside cuts by the #2 WR's. The picture below shows how each side will respond to the curl/flat combination. 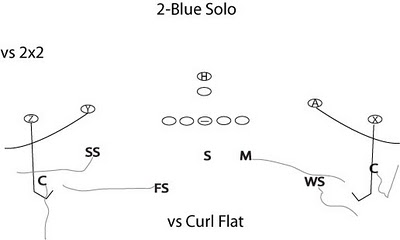 What makes sense to me is that this is a quasi-zone coverage, but with specific rules as to when that zone coverage eventually becomes man coverage and which defensive player takes the appropriate offensive player.

For a better explanation (and it was tough finding a definition of Squats and Halves Coverage), lets go to our friends, at Shakin The Southland:

On the weak side, there will only be the WS and CB on the #1 receiver, and the combination will play what is called "squat and half" coverage or "bracket" coverage. This means the CB will come up to try to squat or sit on routes (bumping the WR at the LOS) with the WS playing deep coverage. Bracket coverage looks a little like a Cover-2 zone, except that the first defender never peels off the receiver to defend the flat. Both defenders maintain high-low coverage throughout the receiver's route. Note that by "weak" I am talking about passing strength, not the Split-end side. The weak side would be a TE and Flanker, which are not as good at receiving as two true WRs to the strong side.

We Don't Worry About Formations Any More

The problem I had with digesting a big part of this is that I wasn't sure how a defense can figure out how to cover multiple formations and multiple sets. I just kept thinking that it was tougher than that. Patterson explains that it's really pretty simple and that there are only three formations can give the secondary:

We don't worry about formations any more. When you divide the formation down the middle, to each side there are only three formations the offense can give the secondary. The offense can give you a pro set, which is a tight end and wideout; a twin set, which is two wideouts; or some kind of trips set that the defense will have to defend. That is all they can give you. In three days we teach our kids to line up in all three coverages against those formations. We don't practice on Monday, but on Tuesday when we start talking about our game play, we never talk about lining up. All we talk about what the opponent is going to be doing and how we are going to adjust to it.

This is really what I think good teams do,which is that the concept of where to line-up should be incredibly simple and that once the concept is taught, then the rest of their time is spent game-planning.

Up next: Establish the eight man front.