Phil Steele released his 2011 Preseason All-Big 12 Teams and there were only a handful of Red Raiders represented: 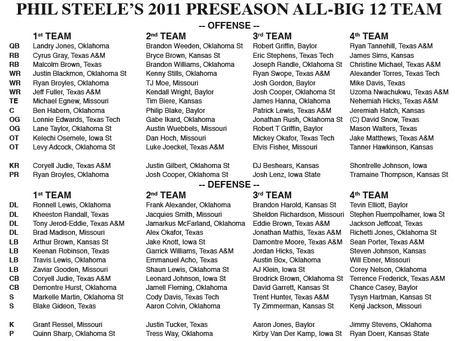 For me, the tough thing is to judge something like this is that it's tough for me to know whether or not there were certain Red Raiders not receiving the attention that they deserve because it's tough, for me, to judge the relative talent across the conference.  With that being said, I think the right Texas Tech players were recognized and I think that preseason teams tend to reveal what people are thinking about the conference in general. Teams are either highly thought of and as a result have a lot of players on these teams and then the season plays out and things are a bit different.

Texas Tech returns all 5 starters, was 4th in sacks allowed (21 sacks allowed total) and 9th in rushing (141.37 YPG). And those numbers are better than what they were in 2009 (31 sacks allowed and 84 YPG).  I think that Texas Tech may be the only team that returns all 5 starters and if anyone is banking on the offense being better in terms of sacks allowed and rushing, it should be Texas Tech. I know, a lot of you feel the offense wasn't up to its standards, but truth be told, I thought the problem for the offense wasn't necessarily the production, but the consistency and returning all 5 starters helps out a ton. Granted a bunch of this hinges on the play of the quarterback, but I still think that the Texas Tech offensive line should have received a bit more attention. You could make the argument that LaAdrian Waddle was an omission, but I've really come around on Justin Keown and Deveric Gallington his hardly ever mentioned and there's usually a reason for that.

So much more after the jump.

And it should probably be noted that Baylor loses the best offensive lineman in Danny Watkins, yet had one of the best overall offenses last year. They should be complaining, perhaps, the most.

I have no complaints about running back and receiver. Stephens is about where he should be and given that he might not get the carries that Steele anticipates because of the overall talent at the position, he might not be a 3rd team player by the end of the year. With the graduation of Lyle Leong and Detron Lewis, by far Texas Tech's best receivers, only giving Torres some credit for his 2009 season seems appropriate.

If I'm considering those players who could step up, the returning players are inconsistent. Tramain Swindall and Jacoby Franks have always been inconsistent. Cornelius Douglas can be terrific as can Austin Zouzalik, but they need to produce each and every game. There will be 2 new starting outside receivers and if I'd love it if 2 of Eric Ward, Marcus Kennard, Darrin Moore or Swindall would step up their play to all-conference play. I'm not sure that I can pick one or another, but by the end of the year I'm confident that someone is going to surprise, I'm just not sure who it is yet.

And if Jace Amaro isn't the buzz of the conference, I'll be shocked.  I think he's that good.

And although I like Seth Doege, I don't think he's better than the 4 players named.

THE DEFENSE | The thing that stands out to me is that there really isn't anyone on defense that opponents fear and/or recognize as being a good defender. And I think that right now, this opinion is justified. There are a couple of guys that I think will make an impact by the time its all said and done. I do think that Cody Davis will continue to be solid and I think he'll be even better this year in the 4-2-5. Safeties in the 4-2-5 are usually the high tacklers and I would expect that Davis will continue to be a solid all-conference player. It's tough to take a leap of faith on these sorts of preseason lists, although Steele makes an admitted leap of faith naming Malcolm Brown to his first team offense without playing a collegiate snap, but if you were to ask me, I'd be taking a leap of faith in CB Tre'Porter, S Terrance Bullitt, LB Cqulin Hubert, DE Scott Smith and DE/DT Leon Mackey all making a significant impact by the time that the 2011 season is completed.

Because Porter had not really found a position last year as he flip-flopped between safety and cornerback, I think it held him back a bit. He still finished with 76 tackles, as a true freshman, 4 TFL and 6 passes broken up. That's pretty good production from a true freshman. Bullitt is a guy that is a true leap of faith, but the coaching staff brought up his name a handful of times during the spring practices, which leads me to believe that they think he's going to be very good. With his size and speed and where he'll play, i.e. the strong safety spot, I think that Bullit is bound to burst on the scene especially if Texas Tech even has a bit of better play from the defensive line and cornerbacks, which I think that they will.

Hubert will be in the middle of it and I think that by the end of the year, he'll be in the all-conference discussion. Although I love them, Hubert has significantly better speed with relatively the same size as guys like Bront Bird and Brian Duncan did last year. Hubert is aggressive and I think he tends to over-run plays a bit, but I also think that by the end of the year we're going to marvel about how Hubert is a playmaker, whether it be making plays behind the line of scrimmage or running down plays, he's got the tools to be a significant player next year.

From what we saw of Smith last year, there's no doubt that he makes a significant impact, so long as he plays. In only 5 games last year, Smith finished with 4.0 TFL, 3 sacks and 14 tackles. Smith fancies himself as a pure rusher although I think that a part of this was the way that Willis ran the defense last year (or at least I hope so) and too often was simply running up the field without playing the run as much, but I'm willing to guess that as long as Smith is on the field, he's going to have to be accounted for by the opposing offense. I think that Smith's technique will be better and as a result, I think he's going to be a better player. Mackey is my true wild-card, but there were too many good schools that have been after Mackey over the years for people to be wrong about his talent. Between his JUCO and prep school stops, I think he committed to Virginia Tech and South Carolina while having offers from Alabama just last year. I wish I could tell you that I've seen film of Mackey and try to back some of this up with some sort of tangible thoughts on how he'll fit and so I'm basing this on a hunch more than anything else. Very scientific.

OVERALL | Turfburner's Jay Beck broke down which teams had the most picks:

You may not like it, but TAMU is the preseason darling of the conference. Get used to it for the summer.  I do think that some of it is warranted, they return some excellent skill position players, as does Oklahoma St. and Oklahoma.  I'm probably the most surprised by Texas receiving 11 players, but I guess I shouldn't be surprised.

If anything, this should be motivation for the Texas Tech players.  I'd guess that Steele will be similar to the other preseason magazines, which is that the press probably won't think much of Texas Tech's chances this year.  Texas Tech put out a press release and if it were me, I'd post it in the locker room and let everyone know that there are going to be a lot of the press that doesn't think much of the talent.  Defensively, that thought certainly has merit after last year's showing, but it's a new year and it's a new scheme and there is opportunity for this team to shine.