1.  Football Coaches Media Spring Teleconference - Big 12 Conference - Official Athletic Site | You can listen to Tuberville, and all of the other Big 12 coaches, talk about their springs.  I am having spotty internet access, so I had trouble listening to the whole thing.

2.  Source: Gillispie Getting It Done Already with Staff Hire - Yardbarker and Player Bio: Chris Walker - VILLANOVA UNIVERSITY OFFICIAL ATHLETIC SITE and Villanova Basketball Assistant Chris Walker Takes Texas Tech Associate Head Coaching Job - The Nova Blog | It appears that head coach Billy Gillispie will hire Villanova assistant coach, Chris Walker.  According to his Villanova biography, Walker did coach some AAU squads and would imagine that he has a handful of connections in the Houston area, which is his hometown.  And SB Nations' Villanova blog writes that Walker's Houston connections never panned out for Villanova.

3.  Scout.com: Spring 2011 - Ranking The Big 12 Coaches | CFN ranks the Big 12 coaches and head coach Tommy Tuberville is the #7 according to CFN.  The strange thing for me is that a lot of the write-up on Tuberville is about  the Stanley McGlover allegations (I had to Google who that was and he's the guy that says he got paid while at Auburn on HBO's Real Sports).  I didn't think it was appropriate to base or discuss the fact that a booster may have paid McGlover while Tuberville was at Auburn in regards to Tuberville's coaching ability, especially since McGlover's accusations are just that . . . accusations.

4.  Lady Raiders hope to make history - The Daily Toreador: Sports | The Lady Raider tennis team is 7-2 in conference play and is hoping to compete for a conference championship in the first time of the program's history.

6.  Recruit’s Friend, Team’s Fan and Colleges’ Headache - NYTimes.com | Really interesting article about how fans and social media are having an impact on recruiting.

7.  Still lots of unanswered questions for Big 12 - Big 12 Blog - ESPN | Pretty good Q&A with Ubben who talked with the attorney for the Big 12 who negotiated the new television deal.  Really enjoyed his work here.

8.  3-point stance: A common sense tragedy - College Football Nation Blog - ESPN | Maisel somewhat blames Tuberville for the current situation that Auburn finds themselves in because of some of Tuberville's recruiting classes.  This is akin to blaming Leach for the 2008 recruiting class.  You can't be 100% on talent evaluation and sometimes, scholarship numbers are limited, which can limit the numbers on a class.  Those classes at Auburn didn't appear to be completely devoid of talent (2008 and 2007).

8 more spectacular things are after the jump, including a picture of me and the tree that fell at my house 2 weeks ago.  OMG!

9.  Courtney Linehan of the AJ on the Williams & Hyatt Show [AUDIO] - SportsRadio 1340 The Fan | You can listen to Linehan talk a bit about new signee, Midland College PG Ty Nurse.  Nurse told Linehan that he thinks he is a cross between Steve Nash and Chauncey Billups.

10.  TexasHSFootball.com - 2011 THSCA All-Star Football Classic Rosters | From what I can tell, Texas Tech has 3 players on this roster, OL Matt Wilson,  DE Kindred Evans and RB Kenny Williams.  Am I missing anyone?

11.  Tech pitching hits stride against UT, embraces road trip - The Daily Toreador: Sports | The pitching staff better be good and going into Manhattan, KS this weekend, this team really needs to win a series.  Would love a sweep.

13.  UMass To MAC: How Will The Football Divisions Look? - Hustle Belt | Who else knew that UMass was now in the MAC?

14.  PHOTO: Vince Vaughn Has A Laugh At Roberto Luongo's Expense - From Our Editors - SBNation.com | This made me giggle.

15.  A look at the Big 12’s quarterback battles | NewsOK.com | Meh. If you need to find out what's going on around the conference, then take a look.

16.  This is me and the tree that fell at my house two weeks ago. 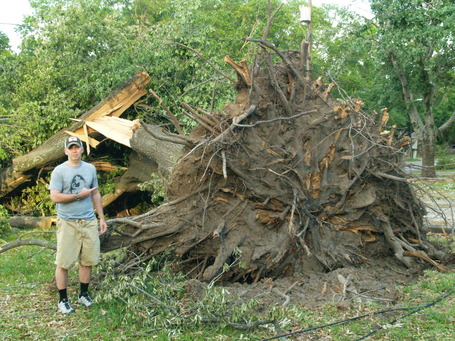