Not surprisingly, there are conflicting reports about the possible hire of a new athletic director.  I came across this tweet from NBC Miami Reporter Adam Kuperstein:

Hearing unconfirmed reports that U of Miami Athletic Director Kirby Hocutt is leaving for Texas Tech job. Even if true, I don't get the move

Then, yesterday, the DT asked President Guy Bailey, who stated unequivocally that no offer has been made:

Bailey said he is the only person who has the power to make the final decision.

"I couldn’t tell you what the source of the gossip is — it’s kind of like going to a bar and listening to stuff, asking around," Bailey said during a phone interview. "The only offer that can be made is from me.

"I have not made an offer yet."

It wouldn't surprise me that Hocutt is the leading candidate and perhaps this leak is a bit premature, but it appears that at the least, Hocutt is the front runner.

Let's get to the stuff off the field first.  Per LAJ's Don Williams, the 2011 Texas Tech vs. Baylor game will be played at Cowboys Stadium and will be a Baylor home game.  Here's AD Gerald Myers:

"We just had a great experience there," he said. "Our fans, the players, the coaches, they all enjoyed it — particularly our fans. I didn’t get a single complaint about playing that game at Cowboys Stadium.

"In fact, it was all positive. We made more money over there than we did at the Cotton Bowl."

On some level, I'm okay with this, but I certainly understand the concept about taking a home game from Lubbock isn't good for Lubbock.  I guess it's not surprising that on the heels of a new and exciting game at Jerry's World, LAJ's Don Williams also writes about the increase ticket prices, averaging about $30 to $50 per ticket:

The season-ticket prices do not include personal seat license fees, which remain $300, $150 and $100. Red Raider Club donations ranging from $100 to $350 also are required to purchase season tickets in 22 of the stadium sections.

The $269 and $189 season tickets — available in 11 stadium sections — come without a seat-license fee or required Red Raider Club donation.

There's a reason why the ticket prices are increase, a lot of it may have to do with paying for Tuberville's salary increase, or having to pick up the slack for a floundering men's basketball program that will most likely lose money next year.  Or perhaps to help pay for renovations to the baseball facilities.  This is the way the athletic department can make money and just like the basketball program, the administration is banking on the idea that this will be a winning football program in 2011, one that fans want to see.  All eggs in one basket.

There's so much more after the jump, including premium content that you can only get by clicking the "Continue reading this post" link:  DTN's patented and hand-crafted non-transcript of Tuberville's post-practice press conference, thoughts on the men's basketball team's loss to Colorado and the baseball team hosts the Brooks Wallace Memorial Classic starting today.

Two good physical days of practice.  Especially on defense. Working hard on defense.  Looked a bit quicker.  Probably have about 10-12 guys out with injuries.  RT LaAdrian Waddle's injury is just a twisted knee and probably miss the spring.  We have a lot of guys working through injuries that wouldn't have practiced last year.  Working on short-yardage and will do this during the scrimmage.  Scrimmage on Saturday, try to get in 130 to 140 plays.  The offense responded to the challenge, yesterday didn't have good focus.  Sometimes they need a wake-up call, can't play 3 plays and then take one off.  Kicking game is getting better.  K Donnie Carona kicked better today.  Really pleased with the offense and defensive line.  DC Chad Glasgow is losing his voice.  WR Alexander Torres is fine (he's in the blue jersey) more precaution.  SS Terrance Bullitt at strong safety, thinks this will be good for him, close to the line of scrimmage.  Covers a lot of ground.  In my eyes, one of the most improved guys defensively.  With his height he's a good fit there.  Depth at safety is fine.  S Cody Davis not practicing much, but he's getting the defense.  S Tre' Porter moving back to safety is good for him, was out of position last year.  Should get some guys back this week.  DB Will Ford is no longer with the team.  Next guy steps up, we did all fall.  Was eligible last fall.  Just rotating quarterbacks, and the true test will be on Saturday, running the offense, having some presence on the field and getting people lined up.  Will be rotating them around this Saturday.  Middle of the defensive line, have DT Lawrence Rumph back.  DT Pearlie Graves has gotten better and better, will have some help in the fall.  We're pretty good there.  Coby Coleman is out of shape, had shoulder surgery in the fall.  DE Aundrey Barr is limited, we just don't want him to get in a pile after knee surgery.  He might go some in the second scrimmage.

I'm incredibly excited to say that there was no mention of the weather and the humidity in Lubbock yesterday.

The big news is of course Ford leaving the team.  It was highly suspect that he was injured almost the entire year last year with a hamstring injury.  There have been rumblings that Ford didn't focus on academics as much as he should and perhaps some attitude problems.  I really don't know, but since he wasn't here all of last year, it's not terribly upsetting.  I worry about myself because I haven't been terribly upset about the loss and/or transfer of DT Myles Wade, DT Bobbie (Agoucha) Hampton and now DB Will Ford.  I probably need to start getting worried about some of this.

Same song different verse.  Started off poorly, played excellent basketball to get back in the game, but comes up short.  Perhaps the difference in the game is that Colorado made 17 of 21 from the charity stripe while Texas Tech made only 11 of 20.  I still love watching SF Jaye Crockett so whatever he does.  PG John Roberson and SF Mike Singletary both shot the ball well, but the rest of the team (sans Crockett) didn't do very much in terms of putting the ball in the basket.

And now your Red Raiders are 12-16 overall and 4-9 in conference play with three games remaining (Oklahoma St., Oklahoma and Texas A&M).  You might be able to get a win against Oklahoma, which is the last home game, but I'm not holding my breath.  Texas Tech sits 11th in the conference overall, tied with Oklahoma St. and Oklahoma.

The story of the game is that Roberson called out the fans last night for the poor attendance last night.  The boxscore says that 8,085 people paid for tickets, but you tell me how many fans, courtesy RP.com's Travis Cram, are actually in attendance: 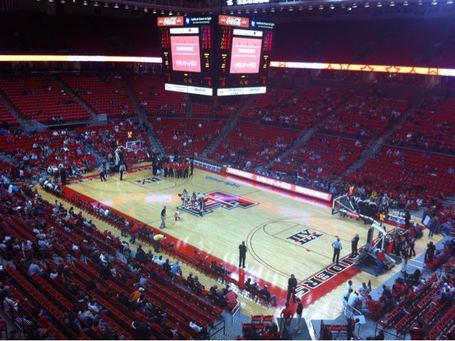 LAJ's Courtney Linehan (be careful, there's a video at the top of the story that plays immediately) and DT's Tommy Magelssen write game stories from last night and here are the quotes from Roberson

Roberson is right.  There was no one there cheering the team and it is ridiculous.  There is a reason why fans and students don't show and it's because the product on the field or court isn't worth watching.  Students and fans will show up if you win.  No matter the sport.  At some point, the athletic department of the new athletic director will have to make a decision.  There is no doubt that the season tickets were sold this year to probably keep the program close to self-sufficient, but if last night's attendance is any indication as to where this program is headed if Pat Knight is the head coach next year.  And Pat talked about his job security and what he's done at Texas Tech:

"So if you don’t want me here, there’s going to be someone else who wants me. But that’s part of the job."

He said he’s proud of taking over the program from his father, hall-of-fame coach Bob Knight, because it was a challenge.

"People can write and say anything they want about me, but the one thing they can’t say is that I ever took the safe or easy way out," Knight said.

PK is right here too.  He does run a clean program.  He is graduating players.  He is trying to instill some discipline, but the problem is the same problem with the DT's headline:  "Red Raiders lose 71-68, clinching 4th straight Big 12 losing season".  That's right, it's the 4th straight year for a losing Big 12 record.  This chart sums it up nicely for me:

There are fans that are okay with PK being the head coach next year.  I just want more for this program.

Team Speed Kills Year 2 takes a look at the NCAA's Notice of Allegations against the University of Tennessee and there's a ton of information at Rocky Top Talk . . . watch out, the crazy Cowboys from Stillwater will have a "suit-out" on Saturday to poke (see what I did here) fun of Pat Knight . . .

The Red Raiders baseball team will host the Brooks Wallace Memorial Classic starting today and below are your projected starters.  As noted over the weekend, the projected left fielder, Scott LeJeune, is not currently with the team for personal reasons (I have no idea) and so the infield and outfield have shuffled a bit.

You should check out LAJ's George Watson on the Williams and Hyatt Show with your favorite radio host, Ryan Hyatt, talking about the baseball team's 4-0 start.

"He needs to be a player for us and he will be," Spencer said. "He’s not one of those guys who gets to walk into the fire. He gets thrown in and he’s going to play every day he’s healthy. He’s a special player and I think that we’re going to grow to appreciate him and what he does."

The forecast for Lubbock this weekend looks to be great to watch some baseball on Friday and Saturday (I can talk about the weather too!).