Five Questions/Things | The Return from Ethiopia

Share All sharing options for: Five Questions/Things | The Return from Ethiopia

This really doesn't belong on the front page, but I'm back from Ethiopia, Fitsum in hand.  First and foremost, I'd like to give a tremendous shout-out to RndRckTTU and San Antonio Red Raider for filling in while I was gone.  You have no idea how much it's appreciated.  I haven't watched or read about Texas Tech in ten days and so to catch everyone up on my life and my thoughts about things, here's my five things rather than five questions.  I'll need everyone else to give me their five things that I missed while I was out to help catch me up on Texas Tech. 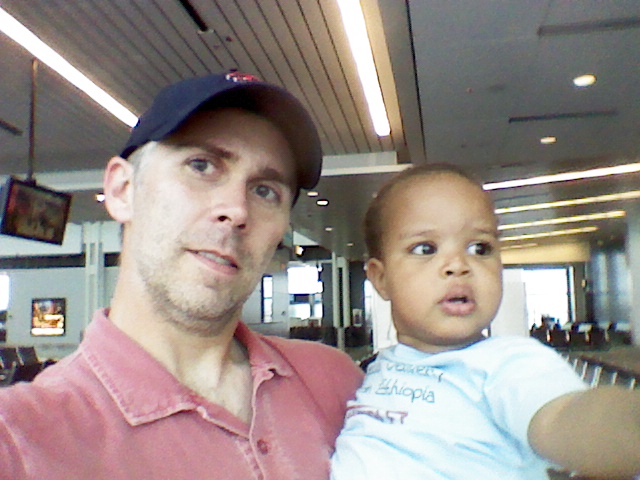 1.  Fitsum is a bundle of joy and happiness.  He is everything we hoped he would be and he's even more than that.  We arrived in Addis Ababa, Ethiopia on Monday morning and picked him up then.  Later in the afternoon he would go on these screaming angry sessions and eventually, maybe after an hour, we were able to calm him down and he would go to sleep.  This lasted pretty much through the entire week and he was screaming for his nannies at the adoptions agency's home.  I wrote in my journal (yes, I really have a journal) that this was a good thing because it means he was loved while at the adoption agency's home and that he was incredibly loyal to the nannies who took care of him.  It took me a bit of time to realize that he's spent half of his life in that home and those wonderful ladies are all the family that he knows.  I hope one day to earn that loyalty and love.  The photo to the right is me and Fitsum as we got to Washington D.C. and is now officially a U.S. Citizen.  The face I'm making is me struggling to hold a kid who weighs 30 pounds as I'm not used to hauling around that sort of extra weight.

2.  Because the screaming angry sessions didn't stop, we were concerned about his health so we wanted to make sure he wasn't sick or have some sort of ear infection as we were about to embark on a 17 hour plane ride home.  We went to the finest hospital in Ethiopia and sat down with the head pediatrician in the hospital and we were a bit worried about the cost.  It turns out that to see this doctor was 100 Birr and that's about $6.00.  The doctor thought he was fine, but if he asked that we take him back to the adoption agency home and if he was fine, then he was probably okay, but just having some attachment issues.  If not, then we would do an ultra-sound to check his stomach for any issues.  That ultra-sound was going to cost 150 Birr, which is about $7.50.

3.  We got home and it's been a whirling dervish of friends and family wanting to see him.  He's been so good with his new nephews and nieces and the other kids, but he doesn't quite understand the concept of sharing quite yet, but it's understandable considering he's coming from an orphanage where you get what you can.  He has laughed and been entertaining to everyone that's met him.

4.  On Saturday night my mother-in-law brought by my wife's dog, Olive, a 10 year old pug and she wasn't her normal self.  My mother-in-law said that he hadn't eaten all week and has been pretty down, so Saturday night at 9:30 p.m. I took Olive to the local vet and he couldn't see anything wrong with her and I didn't get home until a little after midnight.  On Sunday (yesterday) she wasn't any better and she was shaking and having trouble breathing and I took her to the emergency vet clinic yesterday afternoon and they found an obstruction in her intestines.  They had to do surgery otherwise she had no chance of living.  The vet wasn't able to start the surgery until about 10:00 p.m. last night and he was to call me with any updates.  Thus, I slept on the floor in a back bedroom (we don't have the bed set up) so that I wouldn't wake up my wife and Fitsum.  She passed away after the surgery was over, trying to wake up from the anesthesia at 2:30 this morning.  I had to go break the news to my wife and she was devastated, as was I.  This dog has been my wife's best friend for the past 10 years and when we met, Olive barked and growled at me as if she wanted to rip off my leg.  Over the years, she has come to love me and I love her and she's been a wonderful dog, but she was being protective of her owner, my wife, and that attribute never stopped.  I didn't sleep the rest of the night so I'm running on fumes today.

I told my wife that Olive lived long enough for us to bring Fitsum home and it was her time.  I don't know how much solace that is, but it was all I could offer last night.

The circle of life is a funny thing.  It can bring you absolute joy and absolute sadness, all in the span of a couple of days.

5.  I only know the scores of the two Texas Tech football games and anytime that there's a loss, it's tough.  I don't have a clue what happened and I really don't have a clue as to what happened last week or this week.  I didn't turn on the television or hop on the internet the week I was gone.  I was too busy trying to be a Dad and I if you had asked me a year ago if I would have done that I'm sure the answer would have been no, but now, I guess I have a bit of a different perspective.

I know that a lot of folks are upset at Tuberville for the management of the games, or at least that's the gist I get thus far.  I had a friend email me and tell me that he hopes that all of us Tuberville-lovers got what we wanted and it's time for him to go.  I guess I need some time to figure that out and I'm not sure where I stand.  I think the thing that I first thought when my friend emailed was that given the circumstances when Tuberville was hired, I thought he was the best option.  I didn't like the circumstances of how it all transpired and I think I've made myself clear about that when Leach was terminated.  I'm still hopeful, but that's how I'm wired and how the rest of the season plays out will be a huge part of my personal evaluation process.  It's not going to get any easier from this point forward.

So tell me five things to catch me up on the ten days I was gone.  As always, keep it smart, witty and clean and no name-calling as I really want your earnest thoughts on five things that I should know.