New Mexico Game Watching:  The LAJ has information on where you can watch the game this Saturday night.  For those of us who are out of town, the Alumni Association has a list of places where you can watch the game, from Austin, to Dallas, to Denver (hat-tip to djollie for finding the link).  I intend on watching the game somewhere and could easily be talked into driving up to Collin County if you guys and gals are getting together again.

Press Conference:  It was just head coach Tommy Tuberville yesterday and no players.  Here's the non-transcript:

Tommy Tuberville:  OT Mickey Okafor and IR Austin Zouzalik are back.  WR Alexander Torres will travel with the team and he may not get better through the season, so he might play.  Punt returner will be between IR Detron Lewis or Zouzalik.  Not worried about Okafor other than endurance.  He knows what to do, but technique is rusty.  A rested offensive Okafor is better than an offensive lineman that has gone through 60 plays.  Tuberville likes for the offense to throw to the color of the jersey that they will be in that week.  Howard Schnellenberger did this.  Every road game is on grass.  Like to get everyone used to the grass.  Focused on the run game and it's not going to happen overnight.  It's not about effort.  If one guy messes up, then it messes up everything.  It's about finesse and he thinks the team will get better.

I don't know if the non-transcript explained it, but the offense was in white jerseys (I think) and Tuberville said that he likes for the offense to get used to throwing to that jersey, which means that you can expect Texas Tech to wear white on Saturday.  I also like the reference to Schnellenberger.

A few other things, Tuberville sounded excited about Okafor and Zouzalik getting back.  He also said that Torres' back wasn't going to get any better, so he might as well play.  I could see Torres sitting out one more game, maybe breaking the glass on in case of emergency.

"If we can make it a few more games with these two corners (starters D.J. Johnson and Ford) and maybe one guy alternating, then Urell probably … he needs to redshirt," Tuberville said. "All freshmen really need to redshirt, but unfortunately we weren’t able to do it with everybody."

Spotted Photo Gallery:  In other news, the sky is blue and Texas Tech has a ton of cute girls.  Check out the Spotted photo gallery from Sunday.

Guys are excited about 1st road game. Played well in the 2nd and 3rd Qtr on Sunday. Definitely need to start and finish better.less than a minute ago via web

At No. 12 is the prospect that makes the biggest leap of anyone by far. Former Wake Forest (N.C.) Rolesville standout Terrell Hartsfield  was on the radar early heading into his senior season averaging 12 tackles per game and earning an early offer from NC State and interest from North Carolina, Wake Forest, Clemson and others, but fell off due to academic concerns. Hartsfield, a 6-foot-4, 215-pounder, already received an offer from Texas Tech and has committed and is the talk of Hargrave already.

I also found the Rivals.com top 50 junior college players and making the list is little known DB Justin Rogers who checks in at #24 in the country.  I'll change the stars and grades later this week.

So much more after the jump, including a funny video/animation about why you hate the Longhorns, Lobo links, Big 12 links and a couple of RaiderDoc tailgate photos.

NSFW, But Funny:  I was forwarded this by email and it's making the internets rounds, but this is one of the reasons why you hate the Longhorns.  If you're at work, put on your headphones.

"To me, it's just a blessing the he's been able to come here," Bird says. "How he handles himself, conducts, himself, controls the team -- you couldn't ask for a better coach."

And I'll go ahead and say it here.  Players are entitled to opinions, just as much as you or me.  If they like one coach over another, that's their opinion and I'm okay with that.  Not every player is going to like a coach.  It happens.  This doesn't mean that they didn't appreciate playing for that coach, or appreciate what that coach did, but it does mean that they may like the alternative better and because a player may think that doesn't make them wrong, it just makes their opinion different than yours . . . DT's Mike Graham writes that Texas Tech is not taking the Lobos for granted.  Tuberville and RB Baron Batch talk about improving this week in the running game:

"Our offensive line didn’t grade out that well," Tuberville said during Monday’s media conference. "We gave up two sacks and seven hits on our quarterback and then when you don’t rush the ball for barely 100 yards against a team that we should have been able to run the ball a little bit better on — we didn’t play that well on offensive line."

But Batch expects the team to develop a rhythm as the season continues forward.

"I didn’t play my best," Batch said. "A lot of the times we were one block away. I think once we get on the same page it’s going to be fine. It’s kind of the same way we started off last year. We started off slow and we had some young guys playing, and once they got into the flow of things and got comfortable with what they were doing we took off."

Big 12 and National Links:  The BlogPoll has been released and this is a fun read, as always . . . SB Nation's Holly Anderson with her Heisman Watch List . . . the Big 12's Wendell Barnhouse has some notebooky Big 12 things . . . ESPN's David Ubben has those players that are rising and falling this week, and rising is QB Taylor Potts . . . AOL Fanhouse's Brett McMurphy grades all of the new head coaches initial performances, including a "B" for Tuberville and an "A" for East Carolina's Ruffin McNeill (I still love this guy) . . . ESPN's Jeff Caplan wonders if IR Cornelius Douglas could be the next Wes Welker . . .

RaiderDoc Tailgate Photos:  I got a handful of photos from DTN's Tech-ex: JB and I took some of my own during RaiderDoc's tailgate.  Again, it's good to put faces with DTN user names and thanks a ton for RaiderDoc for hosting.

This is the dirt road myself and friends stopped at on the way to Lubbock to have a beer (or two): 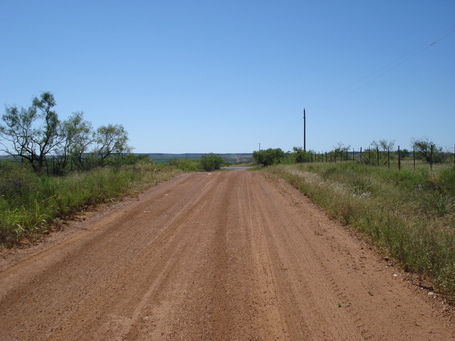 This is the flag that RaiderDoc had us all sign to send with USAFRaider where he promised it would see a ton of miles in the air: 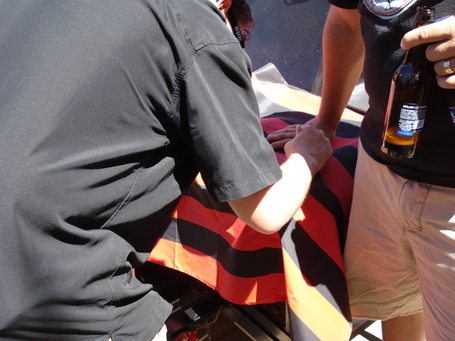 This is the tailgate in general: 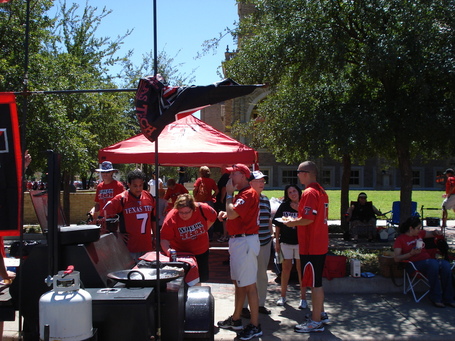 This is me and RaiderDoc (he's on the left, I'm on the right): 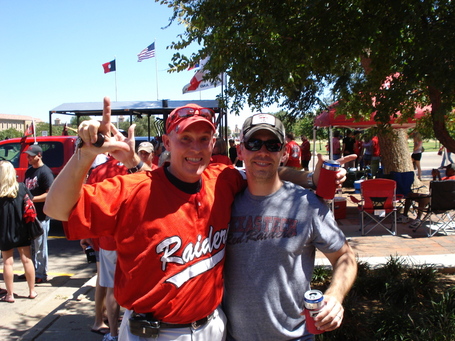 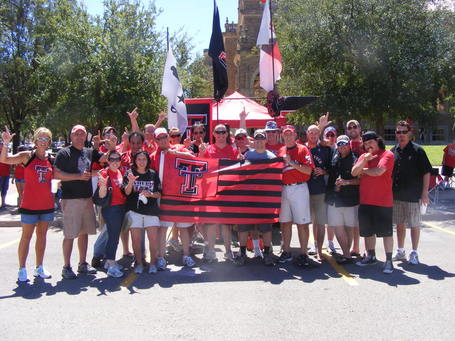 I'm going to have to do a better job of organizing this the next time I'm in town so even more folks can attend, but this was a ton of fun for me to visit with everyone.  Thanks again to everyone and I can't tell you all how much I appreciate your passion for all things Texas Tech.