Did Neal Brown's Offense Pass Too Much?

Share All sharing options for: Did Neal Brown's Offense Pass Too Much?

After Texas Tech's dismal offensive performance on Saturday against Texas, one of the big concerns we've heard is that Texas Tech did not pass enough.

After the game, Tuberville commented that Texas Tech needed to do a better job running the ball to set up the pass.

Was Tuberville for the pass before he was against it?

Doesn't Tommy realize that we run the Air Raid at Texas Tech?

So who's right, the Tech fans (and Air Raid disciples) or Tuberville?

Let's take a closer look at the numbers and see if we can find out after the jump.

In the chart below, we examine the types of plays called by Brown (Run, Pass, Punt/FG) based on the down situation in which the play was called: 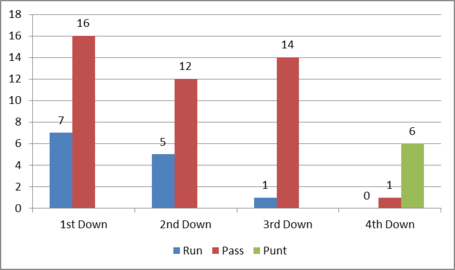 These totals differ from the official play calling count in two ways.

First, I include plays in which penalties were called whereas the official totals omit them.  So, for example, if a play results in pass interference, according to the official results, the play is not counted as a pass play.  However, in my tabulation I recognize the actual play itself as a pass play.

Secondly, in contrast to official totals, I define sacks as passing plays rather than running plays.  The point of this analysis is to better understand Brown's play calling strategy against Texas regardless of how such plays might otherwise be officially recognized.

When you add up the numbers, you see that 77% of the plays called by Brown were actually passing plays.

Brown was just as likely to call a running play on first down as he was on second down.  Brown only called for one rushing play on third down (more on that a bit later). 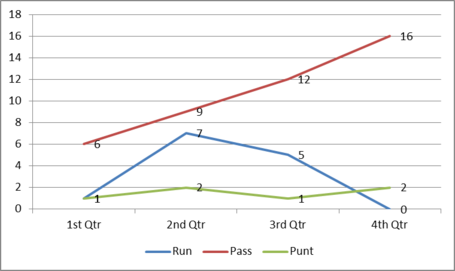 As we can see from the chart above, as the game wears on, Brown increasingly relies on the passing game at the expense of the rushing game.

Let's break down the pass to rushing ratios by quarters for a closer look.

Based on these numbers, it appears that Brown basically abandoned the running game in the second half.

Texas Tech was never that far behind, so what could have been behind that decision?

Texas Tech Offense on First Down

On these 23 first downs, Texas Tech gained an average of 3.65 yards on first down.  For those who are concerned that Texas Tech was not productive enough on first down, this figure supports that view.

However, when we look at the average 3.65 yards gained on first down a little closer, we see that this figure actually inflates our actual first down performance.

Including turnovers, on first downs, we generated 0 yards or less on 8 occasions. Thirty-five percent of our first down plays resulted in either no yardage, negative yardage or a turnover.

On first down, Texas Tech only converted first downs (including one touchdown) on 3 occasions - 13% of the time.

Texas Tech's offensive failures on first down were not a result of calling an insufficient number of passing plays.  On first downs, over the course the game, 70% of the plays called were actually passing plays.  These numbers do not suggest a conservative playing calling tendency by Brown or the earth bound Tuberville.

Texas Tech on Third Down

Over the course of the game, Texas Tech had 13 third down opportunities and was able to convert just three third downs (23% conversion rate).

In fact Brown was most predictable in third down situations.  Over the course of the game he called for a running play just once on third down.

Before somebody burns Neal Brown's house down, let's take a look at the comparative performances of our former coach's protégés Dana Holgorsen and Lincoln Riley.

(Note to DTN readers:  Do not burn Neal's house down.  This means you TallMike and TTPilk!)

Just to show these comparisons are not misleading, OSU ran the ball 35% of the time against Tulsa in the first half (compared to Riley's ECU offense rushing the ball 38% of the time over the course of the game) before reverting to running the ball 55% of the time once it was clear that the game was a blowout (OSU led 41-7 at the half).

It would seem that for the spread offense to function effectively, Brown, similar to Holgorsen and Riley, would also need to increase the number of rushes to between 35-40% of total plays called during the course of the game. (Of course if Texas had lined up 10 in the box, calling for the pass 100% of the time might be justified).

When we compare Brown's play calling to that of Holgerson's and Riley's, maybe running the ball a little more wouldn't be such a bad idea.

Is Potts the real problem?  Does he need to regrow the beard?

In analyzing these figures, I cannot help but think that Taylor Potts is getting a bum rap.  This is the same guy who threw for 400+ yards against Texas in Austin in 2009.

Brown's job should be to put Potts in a situation to succeed.  Brown is the one, as we understand it, who is calling the plays.  Does Potts have the ability to check down to run based upon what he is seeing on field as he once did (most memorably against Oklahoma in 2009)?

Based on this analysis, it seems that Brown's over-reliance on the pass failed to keep Muschamp and the UT defense honest.

If anything, these numbers seem to validate Tuberville's postgame comments that Texas Tech might want to try to call a few more running plays to keep the defense guessing.

Perhaps Tuberville is actually right in this case (with all due respect).

Could the issue be the talent level of the Offensive Line itself?

Tech is only replacing two starters, but in 2009 Texas Tech had to replace three starters.  Questioning the talent level of the offensive linemen seems an unconvincing argument.

Could it be a change of scheme?  Did the line splits really matter that much?

Could it be that Texas Tech is employing a more complex  zone blocking scheme than it has in the past?

Do we need to get the offensive linemen off of Weight Watchers?

Perhaps, but again such an explanation also seems unconvincing.  Over the past three years, Moore has coached 3 All-Americans including 2 players who are in the NFL.  Surely his coaching contributed to their success.   Last year, Moore's younger, more inexperienced line succeeded in fending off some of the top defensive lines in the country (Texas Defense - 3, Nebraska Defense - 8, Oklahoma Defense -9)

Will a few more runs during the game make that much of a difference?

How did Holgerson and Riley suddenly convert their respective offenses into powerhouses in less than three games while our Air Raid offense has turned into to an offense that looks like its being held together with duct tape?

Perhaps, these are the questions that we should be asking.

(In the mean time, we'll leave Don Williams to reminisce about Satchel Paige.)