Crabtree's Progress:  Found this Yahoo! Sports article by Michael Silver on WR Michael Crabtree and his quarterback, Alex Smith, had the same thing to say about Crabtree that his former college coach was saying for years:

"He picks things up fast," Smith said. "Some guys just kind of have the football feel. He’s a very instinctive, natural receiver. He has great hands and body control, and he sort of naturally comes back to the ball, which makes the quarterback look good."

Practice Schedule:  The official site has your practice schedule (all times are scheduled to change):

I think what this means is that you're going to have to check in on DTN over the weekend and if we can get a DTN correspondent in Lubbock, all practices are open to the public, we would be forever grateful.

Washington to Texas Tech
Speaking of excellent classes, Texas Tech's is no slouch, either. If there's one thing Tommy Tuberville has proven he can do in his short tenure as head coach, it's recruit. The next in line is FB Marshall's DeAndre Washington, a highly-sought after athlete-type that we think will eventually stick at running back. His numbers last year were average — less than 700 rushing yards (but with a 7.63 YPC average) — but his real appeal is in his great leadership, work ethic and classroom presence. The kid is just an all-around A+, so the coaches won't have to worry about him down the road. If Tech is really going to try and get the run game up to about a 40 percent usage in the offense, recruiting kids to inherit the RB mantle down the road is critical. Washington is a great fit for that mold.

This is really good stuff and good to hear that he's a good kid and good in the classroom.

The New Chaplain:  LAJ's Don Williams was at the Lubbock FCA event last night and this was the first time that I've heard Texas Tech's new chaplain Steve Grant talk about his vision.  For the most part, Grant talked about how he wants players involved:

Steve Grant wants to see Texas Tech football players serving visible roles in the community. It matters not to the Red Raiders’ new chaplain whether they visit nursing homes, read in schools or volunteer at children’s hospitals.

"Any worthy cause, I want these athletes to be there,’’ Grant said. "It is a privilege to play football here at Texas Tech, and with that privilege comes the responsibility to give back to the community that supports this program.’’

I'm sure we all have our thoughts on how you might feel about a chaplain with the team, I'd just ask that you keep things civil.  The one quote that did surprise me was from my guy, RB Baron Batch, who had this to say about the job that head coach Tommy Tuberville has done at Texas Tech (emphasis mine):

I'll let you digest that.

More on Batch:  RP.com's Travis Cram sat down with RB Baron Batch, who gets that playing football in college is an opportunity to make something better with your life:

"If you use football just to gain minor things that don’t mean anything in the long run and you don’t take advantage of the opportunities that you have while you’re doing it, then you become useless. I’ve seen it happen a hundred times. Guys live it up, live up this lifestyle as a college football player and they don’t realize that it’s a tool to get you to something bigger and to start off another career once football is over."

Batch gets "it" and he's made it clear on his own blog:

Football is something I have a passion for and its something that has given me tons of opportunities, not necessarily just for me but to really help people that I would have never imagined I could help. Its taken me places that I never dreamed I would go. It has introduced me to people I never would have thought I would meet. If you asked me what football is to me this would be my answer "football is a tool, football is a vehicle to something bigger, simply a mode of transportation, football is my platform.....for now."

I'll stop the Baron Batch love-fest for the rest of the day.

Officially Transferring:  There was a mention some time ago about Rutgers TE Tony Trahan transferring to Texas Tech and this is the first time that I've seen an official announcement.  Trahan is from Coppell and is looking to move closer to home, he only caught two passes last year and he's a project.  We had a good discussion about Trahan when the news first broke.

Tweeting About Derek David LeRaven Clark:  24/7's Jeff Howe was watching a Rockdale H.S. practice yesterday and he had some interesting things to say about some Texas Tech commits, 2012 commit LB Derek David and 2011 commit OL LeRaven Clark (there's another David brother, James, only a sophomore, who is apparently making an early impression):

David said he's committed to Texas Tech, but Alabama, Ohio State and Texas are all going to recruit him. His brother Logan also a TT verbal.less than a minute ago via twidroid

Rockdale 2011 OT Le'Raven Clark has an extremely high ceiling as a LT. 6-6, 250 ran a 4.8 in the spring. A LONG way from physically peaking.less than a minute ago via twidroid

Clark is solidly committed to Tech. Said Missouri and Nebraska were two schools he liked a lot before adding to an outstanding class for TT.less than a minute ago via twidroid

Will Texas Tech Change:  I'm running out of time this morning, but I found this FSSW article asking if Texas Tech will change.  It's stuff that most DTN'ers know, but it's something to read this morning.

Schedule Released:  The official site has the men's basketball schedule.  It's footbaw season, I can't muster the energy to dissect this at this time.

Ham Makes Us Stronger:  Ridiculous Upside's Scott Schroeder has the goods on an awesome t-shirt to commemorate former Red Raider Darvin Ham being named the head coach of the New Mexico Thunderbirds: 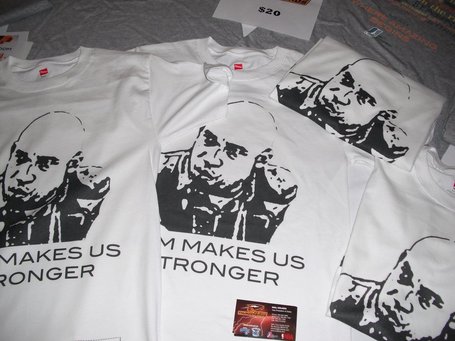 More on Horner:  I posted a FanShot on Monday morning, and Texas Tech made it official yesterday as Jim Horner was named as assistant baseball coach.  Horner comes from the Seattle Marinerss High Desert Mavericks minor league club.  LAJ's George Watson got some really good quotes yesterda as I was curious if Horner would be replacing anyone on the staff and Horner is replacing Ed Gustafson, who was apparently replaced by head coach Dan Spencer during the middle of the year last year.  There's a lot of things to appreciate about Spencer, but he's brutally honest and Spencer explained what happened last year:

"It was a miserable situation for Eddie and me, the whole deal," said Spencer, who added Gustafson was paid throughout the summer while he sought another job. "I guess I’m not a guy who can have a pitching coach with me because I have my own agenda with them, right or wrong. That’s the way it played out. Eddie and I are close as far as doing things in a lot of ways, but when push came to shove, it was a move we needed to make."

Horner will be in charge of hitters at Texas Tech and Spencer will be the head coach and pitching coach.