SPECIAL TEAMS:
Tommy Tuberville:  Are huge for the entire team.  Feels that special teams can set the tone of the game.  Wants lots of speed on the field.  Everything depends on your kickers, in terms of field goals and extra points.  It's a team sport.  Punt returners are Austin Zouzalik and Detron Lewis.  Want to create something.  Will try to block punts.  Want to average 15 to 18 yards per punt return.  Try to use as many athletes as possible, not using lineman.  Use receivers, running backs, and defensive backs moreso than lineman.  Try to use as many backups to create a lot of enthusiasm.

POST-PRACTICE:
They deserve some days off.  Get away from the coaches.  Now just try to get better each week.  No punter named this week.  Worried about SMU's experience.  They have a lot of momentum. June Jones is going to do the same things and do them well.  Not going to make many mistakes.  Have a lot of guys starting to come back.  Four days of practice per week, will be going on the practice field two of the four practices.  Has known Gerald Myers a very long time.  Will miss him.  Not worried about Myers' replacement.  May start in January looking for a replacement.  Talked to Hance about the possibility of Myers retiring and he knew that Myers had been talking about it for a while.  Just didn't know when it was going to happen.

The Big 12 Officially Loves Double-T Nation:  The official Big 12 site is previewing each team through Big 12 writer Wendell Barnhouse.  The preview is for the average fan and that's all good, but who else thinks that Barnhouse might be a reader of DTN?

This is the validation I've been searching for, I can now leave this beautiful Earth in peace.

Notes, Notes and More Notes:  LAJ's Don Williams is really helping us solidify the defensive depth chart.  I'm going to have to work on a post taking clues from Williams' recent articles about a possible depth chart if something isn't released on Sunday.  Here's Williams on the outside linebackers:

The defensive end-outside linebacker spots have Brian Duncan and Smith on one side, Sam Fehoko and Aundrey Barr on the other and freshman Tahrick Peak possibly able to play both.

"Those guys to me are also defensive linemen," Tuberville said. "In a lot of the defenses we play, their hand will be on the ground. It’s more of a 5-2 than it is a 3-4, because you’ve got five on the line."

. . . Williams also has a little bit on the injury-status of WR Alexander Torres OT Mickey Okafor, CB Will Ford, and CB Jarvis Philllips . . .

Offensive Linemen Getting Ready:  FSSW's Travis Cram has a little bit about the offensive line and how they want to improve on the 31 sacks given up last year.  LG Lonnie Edwards talks about working on the running game:

"Our running game has improved tremendously," Edwards said. "We work a lot more on the running game and we’ve gotten a lot more flexible just with the new program and just driving people. … I come from a running team so I had to learn the passing offense. But I think we are doing great and its coming along really well."

"He doesn’t care if he’s out there playing against guys older than him," Batch said. "It doesn’t matter to him. He’s going to go play. That’s what you have to do to be able to get out there early. You just have to have no regard for who’s across from you."

Hubert also talks about how the former staff never recruited Hubert, but was contacted by DC James Willis about a month before signing day.  Hubert also talked about not being intimidated:

Blue: This is my Blue and I bought her and my other dog new Texas Tech collars. To answer a couple of questions:  Yes, she does have crazy blue eyes.  She is a mutt that I adopted and I think she's part blue-heeler and part husky, which explains why she has a short haircut in this picture.  I did not chop-off her tail, I adopted her that way.  Yes, I realize that it's silly to buy my dogs Texas Tech collars, but I don't care. Pictures after the jump. 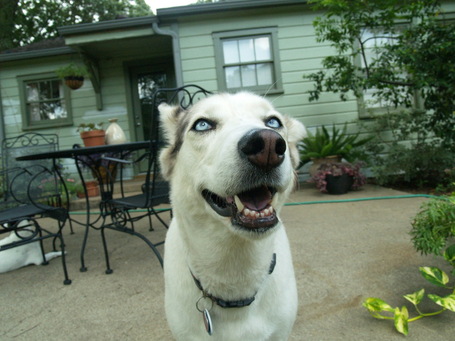 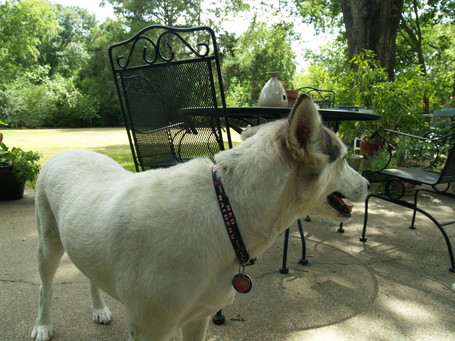