Practice Report:  The official site has some of the video from yesterday's practice, but I couldn't get the video to start, despite clicking on play 500 times.  As a result, I don't have any sort of recap.

"(Crawford) has moved way up," Tuberville said. "He’s going to push the two guys in front of him. The attitude’s been real good, he’s catching the ball better than he did in the spring, and he’s catching on to what we’re doing on offense."

Tuberville also mentions that McRoy could see time at special teams due to his speed . . . Williams mentions that WR Tramain Swindall wasn't given any props by OC Neal Brown and that Swindall is working at both inside receiver spots . . . WR Alexander Torres, WR Eric Ward and WR Lyle Leong were out with injury, but nothing serious . . .

Keown Takes Center Stage:  LAJ's Don Williams writes about C Justin Keown taking control of the center position during this fall practice (I hate calling it fall practice when the temperature never drops below 80 degrees) and here's something I didn't know, which was that Keown was married for 20 months and then divorced.  I'll let Keown explain:

"At first, it was difficult, because we’d been together since junior high school," he said. "We just had to go our different ways. At first, it was bad, but now, we still talk, so it was best for the both of us."

The article keeps referring to Keown as a junior, but the official roster has Keown as a senior.  I'm pretty sure he's a senior, but someone help me out in the comments if I'm wrong.  Keown also talked about playing last year:

"From that season coming in now has helped tremendously," Keown said, "because I’m not going in — I don’t know what the word is — blindsided, I guess, from seeing the physicalness of the different starters from other teams. I’ve been up against a No. 1 draft pick, (Nebraska’s Ndamukong) Suh. That kind of helps a lot."

The Wiz With The Poster:  The Wiz of Odds with the current Texas Tech schedule poster (which he collects and votes on the best before the season): 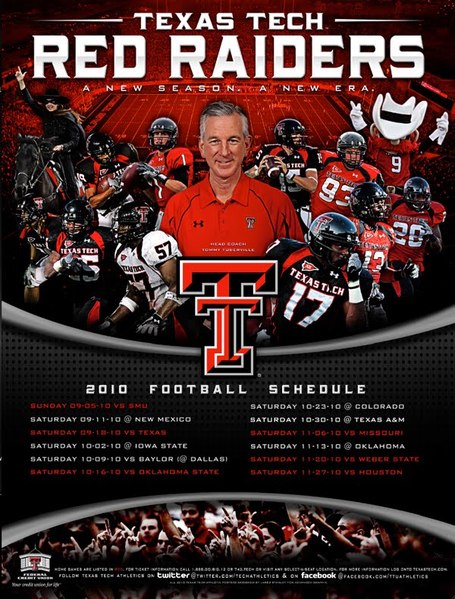 A Man Who Needs No Introduction:  I ran across this story early this morning, which is that former Red Raider and Miami Dolphin, will be making an appearance at a Florida casino, however, this isn't what caught my attention. It was that the folks that wrote this press release felt that J.J. Walker needed an introduction:

Comedian Jimmie "JJ" Walker coined the catch-phrase "Dy-no-mite!" as the star of the Good Times sitcom on CBS.

Really?  Don't we all know Jimmie Walker or am I just old?

Miscellaneous:  FSSW's Matt Scales ranked the top playmakers in the Big 12 and no Red Raiders made the list . . . ESPN's David Ubben ranks the defensive line and DT Colby Whitlock checks in at #5 . . . Brandon Jackson, a DE/TE/LB (and basketball player) from Pennsylvania appears to be seriously considering Texas Tech as an option (I know nothing about him and am having a hard time finding any information on him this morning):

Are you really serious about attending Texas Tech?  Everyone always asks me that. They say, 'Do you really want to go that far away?' But there is nothing wrong with me and going away. I just want to go where I fit in and Texas Tech feels like a good fit.