Where I Come From: My All-Time Favorite Texas Tech Team

Share All sharing options for: Where I Come From: My All-Time Favorite Texas Tech Team

This is the second of a week-long series of posts sponsored by EA Sports NCAA Football 2011.

It would almost be impossible for me to not pick 2008. There have been successful season in the past, and despite the fact that the 2008 team fell short of the mark, I cannot help but think of that 2008 team as my all-time favorite.

Perhaps some of the reason why that 2008 team was so important to me and to DTN was that there are three events which have transformed Double-T Nation into what it is today: the 2008 39-33 win over Texas; the termination of Mike Leach; and possible conference realignment. 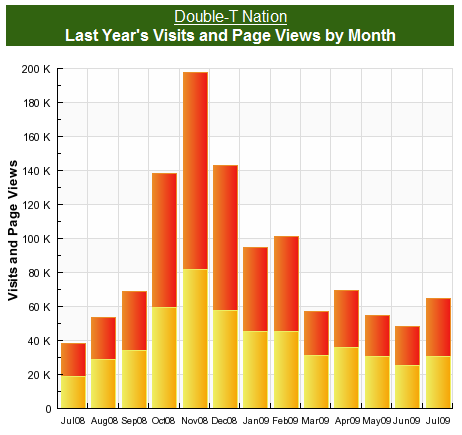 What happened in November of 2008?

Former head coach Mike Leach finally had a quarterback that had started more than one season in Graham Harrell, who would be entering his senior year at quarterback. Sophomore receiving sensation Michael Crabtree would be looking to dominate defenses in the Big 12 and senior offensive linemen Louis Vasquez, Rylan Reed and Stephen Hamby. The defense would have their first full year under defensive coordinator Ruffin McNeill and eventual NFL draftees Darcel McBath, Brandon Williams and Jamar Wall.

The season didn't necessarily start off with a bang as there were questions immediately after a mediocre win against Eastern Washington and a 2-interception and 297 yard performance by Graham Harrell against Nevada that seemed much closer than the 35-19 score indicates.

But then something happened. Things clicked. The SMU Mustangs traveled to Lubbock and the routes began. Harrell threw for 5 touchdowns, 3 of those going to Crabtree, while the defense limited SMU to less than 300 yards in total offense and didn't give up a touchdown to SMU until the 4th quarter. UMass didn't put up much of a contest as the ground game churned out 179 yards rushing for the day, led by senior RB Shannon Woods with 108 yards on only 10 carries. Conference play was right around the corner and despite a shaky first two games, the Red Raiders seemed to have a bit of momentum.

The Red Raiders would have to play three of the next four games away from Lubbock, including games at Kansas St., Texas A&M and Kansas. Against Kansas St., the Red Raiders would score on 9 of their first 10 possessions and scoring a touchdown 8 of those possessions. Harrell made the whole thing look easy. Too easy. Next up was a resurgent Nebraska team that ended up holding onto the ball for over 40 minutes of this 60 minute contest. Nebraska was down by 14 points going into the 4th quarter and the Cornhuskers rattled off 21 points to tie the game 31-31 at the end of regulation. Were it not for a ridiculous 47-yard catch by Crabtree in the 4th quarter on a 4th down call that eventually led to a Baron Batch touchdown that put Texas Tech up by 7 with a little under 4 minutes left to go and an absolutely tremendous pass rush from McKinner Dixon on Nebraska QB Joe Ganz leading up to an interception by Jamar Wall that sealed the victory.

Two road games against TAMU, which was closer than one would have liked, although Texas Tech scored 23 second half points to TAMU's 2 and then taking on the Jayhawks, which proved to be similar to the Kansas St. game in that Texas Tech scored a touchdown on 9 of their first 11 possessions.

All of this culminated in a national television game on November 1, 2008. At the time, Texas was the #1 team in the country and it was two undefeated teams that were both looking to take the first step in conference supremecy on that fateful day in November. This is one of those games where I'd love to put into words the emotions for the entire game. I suppose it didn't matter too much if you were at the game or if you were sitting on your brother-in-law's couch hanging on every freaking play. This singular game meant more to Texas Tech than any game in its history and that singular moment in time was unforgettable for Texas Tech fans.

And sometime after this game, the magic stopped. The magic didn't stop the next week when the Red Raiders routed Oklahoma St. in Lubbock, but when Texas Tech traveled to Norman, a game I actually attended, the magic stopped. Texas Tech couldn't make the fairy-tale continue, but that's not what being a fan is about. Sure, the ultimate goal for every university that competes on the BCS level is to win a championship. Ultimately 118 teams or so go home disappointed, but that never means that you shouldn't enjoy the moment.  Ferris Bueller says it as well as anyone:

Life moves pretty fast. You don't stop and look around once in a while, you could miss it.

With a devastating loss to OU, Harrell breaking his hand and Crabtree injuring his ankle against Baylor, and Ole Miss turning the Cotton Bowl into a forgettable game, the dream-season ended all to abruptly.

But that shouldn't ever mean that you shouldn't always enjoy the moment. They don't happen often and to say that you were around for that game and you lived in the emotion of that moment will be something that you'll be able to relay to your children and grandchildren.