Questions About Trainer:  Yep, we're still talking about this, unfortunately.  For those of you catching up, Texas Tech hired Arnold Gamber as the head trainer for Texas Tech, the former head trainer at Auburn.  Gamber is currently involved in a lawsuit by a former Auburn player who claimed that Gamber ignored doctors orders and played the former player.  AL.com's Kevin Scarbinsky wrote over the weekend that the crux of the case is an injury that OL Chaz Ramsey suffered while working out:

The real issue now is whether Gamber directed Ramsey to do some harmful weight-lifting exercises in June of 2008 — against the orders of Auburn team doctor Michael Goodlett — less than two months after Ramsey’s first back surgery.

The lawsuit says Ramsey re-injured his back doing that weight work, which led to a second surgery in January of 2009 and ended his football career.

Ramsey isn't necessarily without controversy who was responsible for what was apparently a vicious chop-block on LSU DT Glen Dorsey:

Miles promised some sort of outrage if, after examining film, it is true what the replays showed. That Dorsey was engaged at the line with an Auburn offensive lineman and intentionally "cut" by right guard Chaz Ramsey. Dorsey's right knee buckled grotesquely as Ramsey went low on him. Dorsey was taken off the field and never returned.

Much of this has to be figured out in court, but over the weekend, LAJ's Matthew McGowan had a few quotes from Mike Leach's attorney, Ted Liggett (which I highlighted on Friday), as well as some quotes Athletic Director Gerald Myers:

Tech immediately fired back Friday and stood behind Tuberville’s confidence — as he expressed Wednesday in the university’s announcement of the hire — that Gamber "puts (players’) safety and well being above all."

Athletic Director Gerald Myers said his staff knew of the lawsuit and made a full inquiry into Gamber’s background before hiring him.

They contacted Auburn’s team physician, the Alabama Athletic Trainers’ Association and a number of other references.

"They all confirmed that Arnold is one of the top football trainers in the country," Myers said. "The information we got, we felt comfortable in naming him as our trainer for football."

I really don't know what to think about this, but I'll just say that of all of the trainers in this world, you would think that Texas Tech would hire a guy without a spot on his record, and certainly without a current lawsuit.  Gamber may be completely innocent of all of Ramsey's claims, but now Texas Tech is forced to defend the hire of an athletic trainer.

On the Right Track:  LAJ's Courtney Linehan had an interesting Q & A with AD Gerald Myers his 14 year tenure as athletic director, who says that Texas Tech athletics is on the right track:

A-J: With everything that’s happened in the last year, what have you learned from it all?

GM: I think the thing we realize is you’ve got to continue to evaluate coaches, evaluate your facilities. You’ve got to have first-class facilities. You’ve got to have coaches who know how to coach and a staff that can recruit. It all comes down to athletes, to recruiting. That’s the reason we renovated that football building for Coach Tuberville, to help him recruit. Some thing with the basketball arena, we do some things from time to time. We built a state-of-the-art weight room a few years ago, just put in a new state-of-the-art hydrotherapy center. We’re getting ready to refinish the floor.

You’ve got to have facilities to recruit, and you’ve got to have facilities to recruit good coaches. Those are two things that are important in having successful teams. If the coaches have the facilities, and you’re in a good conference like the Big 12 and you have the budget to support it, then you attract top athletes. That’s what it’s all about, is taking care of those athletes. We’ve come a long way in taking care of our athletes. 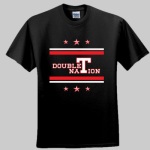 Go visit the DTN online
store and help out with
my and my wife's adoption.

Potts Wins Manning Passing Academy "Air It Out" Challenge:  I didn't realize it until Saturday morning, but QB Taylor Potts was attending the Manning Passing Academy, but I thought that he was just a counselor.  Then I ran across this ProFootballTalk article about how Potts, per ESPN's Chris Mortensen, won the Air it Out Challenge.  Mortensen then asked TAMU QB Jerrod Johnson what he thought about the battle royal between Tennessee QB Matt Simms through TwitVideo (yes, son of Phil and brother of Chris).

Lake Travis wins 7-on-7 Title:  Texas Tech commit QB Michael Brewer and his Lake Travis squad won the 7-on-7 Division I Championship against DeSoto, 42-39.  BrazosSports.com's David Campbell talked with the winning team and in particular Brewer:

Brewer was equally proud of his squad.

"Every game was really tough," Brewer said. "The heat is beating down on everyone and it's really all mental from there. Once we got used to the heat, we kept going and picked it up a little bit."

I mentioned yesterday that the folks at TheOldCoach.com thought that Brewer was by far the best quarterback in the tournament.  Here's some video from KXAN of Brewer and a pretty nice grab by Garrett Gilbert's brother, Griffin:

Top 5 Impact Seniors:  FSSW's Eddie Middlebrook ranks the top 5 seniors in the Big 12 and RB Baron Batch checks in at #4:

4) Baron Batch (HB--Tech): While there is uncertainty at QB under first-year head coach Tommy Tuberville, the running back corp is anchored by veteran Batch who led the team in rushing with 884 yards and 14 TDs. Tuberville has not had success with the spread offense in the past (Auburn), so look for Batch to be a critical piece to Tech's offense for a rushing offense that ranked 115th in the country in '09.

Miscellaneous:  Rock M Nation's Bill C. looks at the BTBS TAMU defense . . . RP.com's Steve Pitts takes some photos of the new practice field turf, but don't forget to always keep track of all things construction with Totally Tech who also has a ton of photos of all recent construction and  . . . Omaha World-Herald's Rich Kaipust looks at the Big 12 running backs . . . CT's Dave Matter considers the storylines of the Big 12 in 2010 . . .

New Player:  Someone emailed me and tipped me off that the Texas Tech basketball roster had a new player, Zach Jones, from Brady HS.  I'm guessing that Jones is a walk-on that made the team and the only thing that I could find on Jones was that he was the 2A-District 8 Offensive MVP.  Anyone know anything about Jones?