How Chip Brown Continues to Baffle Me

Share All sharing options for: How Chip Brown Continues to Baffle Me

I really don't have a beef with Orangeblood's Chip Brown, but SI's Andy Staples wrote an article today about how Brown owned the Big 12 conference realignment discussions.  I've already given my half-baked theory about how Brown and the University of Texas worked the system, which is why he's earned the nickname, the Puppet, but then the Puppet goes and says this:

With some contending that Brown was merely an agent of the Texas athletic department, SI.com asked the reporter to respond to the charge that Texas merely used him as a public microphone for its message and to advance its agenda.

"The people at Texas know that's not true," Brown said. "Even though I cover Texas, some of the people I had a great relationship with when I was at The Dallas Morning News were unsure about my move to Orangebloods.com. My phone calls got returned less frequently or not at all. I couldn't get a football credential until I agreed to do a Big 12 roundup for our national Rivals.com site. I still can't get a basketball credential. I have contacts across the Big 12 from covering the league for two decades. I get that the name of our Web site would lead everyone to believe we were having coffee with [Texas athletic director] DeLoss Dodds and [Texas president] Bill Powers each morning, but I never talked to them once during this whole process. They are still turning down my interview requests to come on the radio now that things have cooled down.

"I think I made the people at Texas totally uncomfortable through this whole thing, to be honest. They are incredibly controlling about information, almost paranoid. So the thought that someone at UT would use me to further their agenda is almost laughable."

Really, he's going to say this and expect everyone to believe it?  I don't think that anyone ever accused the Puppet of having direct contact with Dodds and Powers, but let's be real honest here, there's probably at least a handful of people for the Puppet to talk to, all of whom probably have connections with some of the Board of Regents at UT, or someone in the know. It's very easy to say that he didn't talk with the HMFIC, but he didn't deny that he didn't talk with people close with Dodds or Powers.

Bottom Line:  The Puppet didn't have to talk to the HMFIC.

I'll pull open the curtain a bit and let you know that I've been provided with information from the Texas Tech side of things, all emailed to me, and from a person that I believe has no reason to lie to me.  There's no way in hell I'm going to release that information because I told him that I wouldn't and I won't.  Trust is a big part of life and you don't get very far without it.  Essentially, I was given information and asked to sit on it and I will do so until I die.  Granted, this information would clear up a ton of questions for Texas Tech folks on how things transpired.  Nevertheless, you won't hear a thing from me.

But the Puppet obviously didn't have those types of handcuffs and I'm fine with that.  Whoever the Puppet was talking to, wanted him or at the very least had no problems with him releasing that information.

I can just imagine it now, if I were to reveal that information, I'm thinking that my first quote to Staples might be something like this, "People think that I sit around the barroom table and shoot the shit with Hance and Myers, but the honest to goodness truth is that I haven't talked to a one of them and they keep turning down my offers for an interview.  I've talked to people that work for them, and have direct knowledge of what's transpired, but I haven't talked to the HMFIC.  The fact that I was able to leak exactly what Texas Tech University, I mean my sources, wanted me to leak to make me look like a freakin' genius is mere happenstance.  A coincidence."

Let's be clear.  There is a reason why any other subscription based service can break stories and commitments faster than traditional media outlets, it's because they have contacts in the athletic department that want that information to get out.  Again, these folks are great at making money and creating a cottage industry on the fact that you have to know everything now, but someone in the coaching staff is breaking news to these organizations.

Thankfully, I'm not the only one that thinks that the Puppet is a fraud.  Our good friends over at The Ralphie Report had an excellent question considering how much the Puppet was making all of the administration so nervous because he was so awesome:

And one other thing, has anyone ever checked to see if any of these guys that run these sites are considered boosters?  Here's Texas Tech's definition of what a booster is, and it also goes on to define a prospect.  Here's what makes me a booster, even if I didn't give a penny to Texas Tech:

Be, or have been, involved in promoting Texas Tech's athletics program in any way.

I'm a booster and I'd be willing to bet that so is the Puppet and any of his writers, or staff members and they're all having conversations with prospects.  I'm not sure how these websites are able to overlook this detail, but they are.

At the end of the day, what happens here is nothing.  There is a very nice set-up between these subscription services and their universities and I doubt seriously anything is going to happen to any of them, but I vomit when I read that the Puppet "won" the Big 12 realignment discussion because he didn't.  He was given information (keep in mind that he did a complete 180 in 3 days) based on what was needed to be out in public. 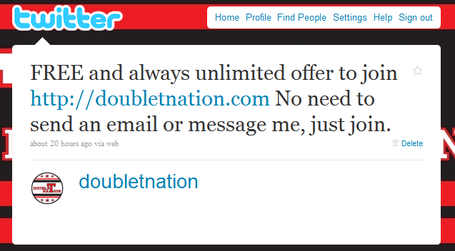