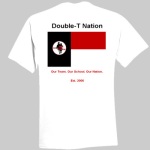 Go visit the DTN online
store and help out with
my and my wife's adoption.

T-Shirt Design #2 Done, I'm Very Slow:  You may or may not have noticed, but I finally finished the design for t-shirt #2, which was a combination of the work of SARR and TTUMAR.  I've got one more to go and I'm working on the third one this weekend.   I know, I'm very slow, we did this months ago, etc.  I'm sorry.  I'll try to do better.

Conference Realignment Leftovers:  I don't think that we're at DTN Edict Level because I don't think that DTN is by any means over-run with thoughts of adding additional teams, but the man who is apparently in charge, Commish Dan Beebe, says that there are no plans for expansion, so you can absolutely forget it (per CT's Dave Matter):

The discussions primarily involved scheduling and championships; and establishment of a process for seeking input from coaches and other governance groups in these areas. Additionally, the group reviewed a range of ideas about future opportunities, including television and branding.

"There is a great deal of excitement about the future of the Conference," said Commissioner Dan Beebe. "Our member institutions look forward to the continuation of excellent competition and providing outstanding experiences for our student-athletes. The 10-school model is one that is extremely attractive and provides the opportunity for continued long-term success. As I have stated previously, there is no interest in expansion and it was not a consideration at the gathering."

I've also heard that Beebe will not be changing his mind on this issue unless UT says otherwise.

David Bros. Commit, Blind Squirrel Finds Nut:  I absolutely admit that my thoughts that DT Logan David might be in some form or fashion connected with his more highly rated brother, LB Derek David's commitment was pure and utter speculation on my part.  If nothing else, I was just connecting some dots.  To clarify, the AAS has a short story confirming the commitment of all of these players.  So here's my thought process.  Once I find out that it's Rockdale 2012 LB Derek David that has committed to Texas Tech, I almost always do a quick Google search on the player.  I found a Rockdale Reporter article about how David was named as the newcomer of the year, fellow Texas Tech commit (but in the 2011 class) OL Le'Raven Clark, also from Rockdale, was named the first-team District 24-3A on offense and defense, while Derek's brother, DT Logan David was named the defensive MVP of the district.  That same article mentioned that he had a handful of prominent offers, but would not be attending college.  I thought that was strange, but my first guess was that Logan had some grade issues that most schools probably knew about from the beginning and although he was a talented player, there was no way that he would qualify academically.  Perhaps Logan knew what he was going to do, didn't want the bright lights of Signing Day shining on him, so the easy answer to any school was that he would not be attending college, all the while he was securing a JUCO offer.  Logan committed to play offensive line for Blinn back in February, and I thought that if there's one position that Texas Tech needs, it's offensive line.  I think this might be wrong as RRS teased that Texas Tech had a 2012 commit from an interior defensive lineman.

I also mentioned that Texas Tech fans are used to having brothers commit, then for one brother to drop his commitment.  I'll be honest, I'm excited about Benjamin McRoy and I think he stands on his own as a player.  I can't figure out for the life of me why he wasn't as highly ranked as his brother, Javares, especially as they have almost identical builds, and speed, but that's fine.  I think the same could be said about Logan in that he was pretty darned talented on his own, he was on The Old Coach's Class 3A All-State First Team and was just behind his brother in tackles on the team as a defensive tackle.  Despite Logan's talent, Derek appears to be the real prize as he is is projected to be the top defensive recruit in the 2012 class.  I'd like to give Tuberville some credit here as it appears that he's gone about the David Bros. commitments in the correct manner and I have to wonder if the commitments are contingent upon the other signing with Texas Tech (i.e., Logan's offer is contingent upon Derek's signing with Texas Tech).

Quarterbacks coach Tom Clements said Harrell has a strong enough arm to be successful in the league, something that was questioned coming out of college, but it’s hard to get a better feel from someone still learning the playbook.

"He has a very good feel for the passing game, you can tell they did a lot of throwing when he was at Texas Tech," Clements said. "He seems like an accurate passer.

"He has to practice a little faster and simulate game speed as best you can. Until he knows the system and can go out there and not really have to think about it, that’s when you can make a better evaluation."

. . . current Dallas Cowboy OLB Brandon Williams is returning from knee surgery and is ready to go:

"He seems to be back where he was last year at this time, and that was a good place," Phillips said, "because he's exceptionally quick off the ball. He's got a lot of skills pass-rush wise. It's good to see him back."

Williams admits he isn't fully confident in his surgically repaired knee yet - "I'm still hesitant on planting and stuff like that," he says - but gained more confidence with each week of OTA workouts in May and June. The times his knee would get sore, he said, were the days off between OTA weeks.

. . . KAMC has the story about former S Joe Garcia is investing in a new coffee shop in Lubbock, Ooo La Lattes, hat-tip Red Raider Nation Twitter (yes, the jokes will write themselves this morning, but would ask that you keep 'em clean) . . .