Big Shout-Out: A few weeks ago I mentioned that I was a little tired because I had gone to a Dallas Mavericks basketball game the night before.  Lo and behold, I got an incredibly nice email from a DTN reader, RRChica, who also works for the Mavs and offered myself and my wife tickets to last night's game.  Well, last night was the game she arranged for us to go to.  My wife and I met RRChica thanked for giving us seats and then told us that she was placing Double-T Nation on some of the signs around the arena.  What?

Shocked and flattered I waited (it's one of those rolling ads that mentions 15 to 20 businesses and each one is on for 20 seconds or so) and RRChica snapped a shot of DTN at the Mavs: 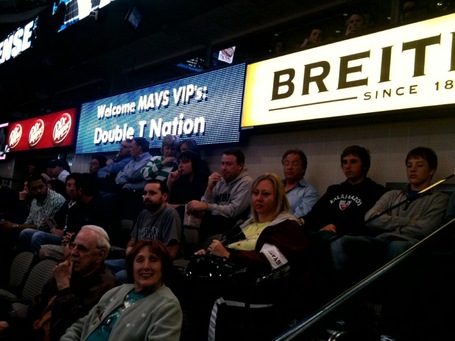 So, a big huge thanks to RRChica.  My old lady and myself had a great time last night.  Our seats were great, much, much appreciated.

Join DTN's 2010 NCAA Bracket Challenge:  You don't have much  time left, so go join up and kick my rear picking the bracket.  JOIN HERE!

I think you should also be able to watch the games live here on DTN (this is me hoping that the widget works) and consider this your open thread:

Wishful Thinking:  I missed this yesterday, but apparently Denton Ryan's Scotty Young, and future Texas Tech quarterback, threw a complete game, striking out 14 and allowing only 1 hit.  It's wishful thinking in that I could only hope that Young could pitch for Texas Tech, but from all accounts, it appears that Young is a heck of a pitcher, with an incredible arm and we better start praying he doesn't get a huge offer to go play baseball in the MLB Draft.

New Assistant Coach:  I'm surprised this wasn't mentioned on the official site, but Amarillo.com's Lance Lahnert reported that Scott Parr, the offensive coordinator at West Texas A&M, will be an assistant coach with Texas Tech:

Scott Parr: The West Texas A&M offensive coordinator has landed an assistant coaching job with Texas Tech. Parr has already started his new job and Tech is lucky to get this dedicated and talented young coach. He will be missed around here.

Here's Parr's bio page on the WTA&M website and apparently he likes offense and puts up big numbers:

The man behind WT's record-breaking offensive unit is Scott Parr, who returns for his third season as the team's offensive coordinator. Parr initially joined the Buff staff in 2006, splitting coordinating duties that season.

During the 2008 season, Parr's offensive unit scored 50 or more points on six occasions while breaking no fewer than 64 team, conference and NCAA playoff records. Among them were records for most yards total offense (7,079), total offesnive yards per game (544.5), total points scored (626) and points per game (48.1). Under his guiadance, quarterback Keith Null shattered the WT and LSC records for passing yardage (5,097), passing yards/game (392.1) and highest completion percentage/season (67.5), among others.