Needing a Win:  DT's Mike Graham writes that the Red Raiders need a win, and this couldn't be a more true statement. PG John Roberson says that the team is not worried about the consequences of a win or loss, but just focusing on tonight's game:

"We’re not thinking about the (implications) right know," Roberson said. "It’s a real big game for us, but we’re only concerned about winning."

And head coach Pat Knight (I'm sure he was probably asked about whether or not he would want to be part of the NIT, although I would assume that he's prefer to be part of the NCAA Tournament) thinks that the NIT would be a good step for the program:

"To go to the NIT would be great," Pat said. "We haven’t been to the postseason in two years. You see what the NIT did for Baylor. I think if you ask (Baylor coach) Scott (Drew), because he had a lot of good guys returning, adding some good guys like we’re going to have in the same situation for next year. He got a lot of really good games in the NIT, you get the TV exposure being on ESPN. It would be a great honor for these guys."

Like Peas and Carrots:  LAJ's Courtney Linehan writes that PG John Roberson and SF Mike Singletary have played so long together that they can read each others' thoughts on the court:

"He knows the way I think, and I know how he thinks in certain situations," Singletary said. "That’s why we work well together. And we don’t get tired of each other."

"With me and Mike, it’s just because we’re around each other so much," Roberson said. "I know exactly what he’s going to do on the court."

New Mexico Game Canceled:  Per the official site, today's scheduled game against New Mexico has been postponed due to inclement weather.  The Red Raiders will get back playing games for a weekend tournament, the Brooks Wallace Baseball Classic with Bethune-Cookman and Washington St. heading to Lubbock.

Bettis gave credit to Mayo for the performance, but Mayo said these types of performances from the junior should come as no surprise.

"When he comes out and sets the tone like that, it puts everybody’s confidence above normal and everybody just starts playing and then we run off eight runs and we just keep rolling."

"Facilities, salaries for coaches, staffs, everybody — all those expenses have gone up,’’ Wells said. "For us to (be competitive), we have to take advantage of where we have a chance to increase revenues, and football tickets is one of those places.

"We realize there’s a point to where you just can’t go higher anymore. We are hoping that we’re not to that point. What we hope is that the increase is small enough that everybody will understand that all we’re trying to do is stay competitive.’’

Wells forgot to include settlements for lawsuits to that list of expenses that have gone up.

I'm sure the jokes and/or comments will write themselves this morning so please enjoy yourselves in the comments.  Here's where your prices are going up: 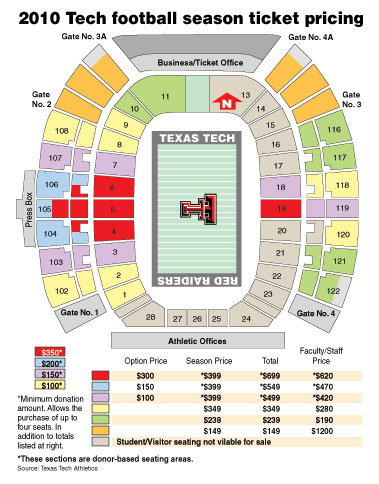 Two Star All-Star Team:  SI's Andy Staples compiles an All-American team consisting of zero to two star players out of high school and your very own Alexander Torres made the list:

WR Alex Torres, So., Texas Tech (zero stars): Torres originally enrolled at the Air Force Academy, but a broken hand suffered after a fall on a training run in 2007 left him unable to complete basic training. Instead of returning to Colorado Springs in 2008, the former El Paso, Texas, high school star went to Lubbock and walked on to the football team. In 2009, Torres led the Red Raiders in catches with 67 for 806 yards and six touchdowns.