Ok everyone.  Consider this post a public service announcement.

With national signing day just hours away, and to prevent – to the extent possible – a flood of malapropisms from streaming forth upon seeing the results of Tech’s recruiting performance, please allow me to provide some perspective on what we should expect at the conclusion of tomorrow’s results.

If tomorrow, after reading this post,  you still see fit to build a statue in homage to Tuberville’s virility or to brand your left ass cheek with a ‘Pirate for Life’  tattoo (it's a free country after all), my hope is that you’ll do so armed with a little more information than you otherwise might have had.

(Sensitive Reader Alert:  This section is replete with sarcasm and poor attempts at wit.  No direct insults are intended, implied or otherwise contemplated).

You remember 2002 don’t you? The class that brought us heralded  5-star recruit Johnny Mack and nine 4-star recruits.  Pop quiz – other than Joel Filani and Fletcher Session, which other 4-star recruit who later became a starter can you recall from that class?

Of course from the 2007 class we got stuck with a bunch of lowly 2-stars including the likes of Brandon Sharpe, Daniel Howard, Bront Bird, Colby Whitlock and a few other slackers I probably overlooked.  (sarcasm font, just in case you missed it).

The chart below shows Tech's annual recruiting score from 2002-2009 (note 2002 is the first year Scout.com published its evaluations).

(y-axis is yearly rating given by Scout.com) 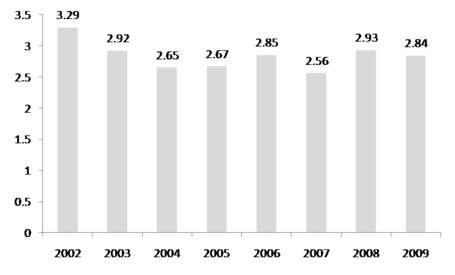 On average from 2002-2009 Texas Tech’s recruiting classes are ranked right about where you would expect to find them – number six overall.

Over this time frame we were regularly out-recruited by Texas, OU and Texas A&M.  Our recruiting classes were also  edged out by Nebraska and Oklahoma State.

Based on current projections, the class of 2010 is expected to be eclipsed by Missouri and the aforementioned five schools.

This year we can expect Tech’s recruiting class to drop from its customary position at number six all the way to number seven.

(I’ve read in places that our class is expected to fall below Baylor’s projected class which is currently scored dead last at 2.27 – that sort of fall does not seem likely).

Texas, however, is projecting its best class since 2002.  So for those of you who are arguing that Tech was closing the gap with UT, and now it is not, you probably have a valid point (one I would also agree with). 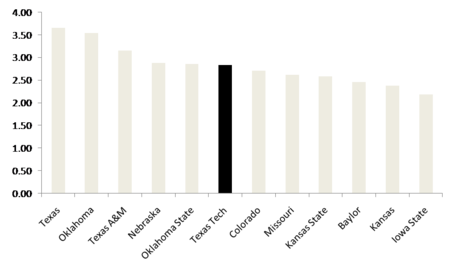 Despite our mediocre showing in the recruiting wars, Texas Tech was the 17th most successful FBS program in terms of winning percentage from 2002-2009.  Among these top 20 teams, nine teams had average recruiting scores less than 3.00. 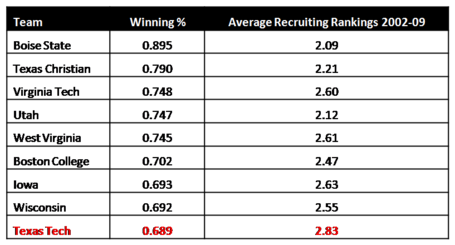 A few notes, Boise State plays in the WAC; TCU and Utah play in the Mountain West Conference - in case you are someone who feels the need to put a thumb on the scale.

Auburn’s average recruiting score was 3.07 over the same period, and had the 13th winningest program. (Much more on this in a later post - Tubephiles should not get too comfortable yet).

Sit back.  Enjoy a cold one.