New T-Shirt Submissions:  I had a few more submissions sent to me yesterday, so make sure and check out the FanPost where you can find a majority of the submissions.  I also wanted to mention that we probably cannot use the words "Texas Tech" and "Red Raiders" on the t-shirts for trademark/copyright reasons and I was thinking that we have three or four t-shirts made up at the beginning and then go from there.

Facebook Connect:  You've probably already noticed that you can now connect your username to your Facebook and Twitter accounts.  For explanation of all of the new feature, see the Blog Huddle post with lots of detail and instructions as to how this works.

Twitter and 4th Quarter Drills:  I was checking around last night and noticed a couple of things.  First, head coach Tommy Tuberville is on Twitter, and yesterday he had a detailed weather report.

Started our 4th quarter drills this week. Guys are working hard. We are developing leadership, discipline, and toughness.

Anyone want to guess as to what 4th quarter drills are?  Maybe similar to a 2 minute drill?

And finally, RRS.com's Chris Level tweeted that spring drills are to start on March 22, 2010, so plan accordingly.

Carter's Draft Prospects:  One of the best NFL websites out there is the National Football Post and yesterday, their scout, Wes Bunting, graded the offensive guards, and Brandon Carter was tied for 7th for all potential draftees with a grade of 6.2 (out of 8.0) and is considered to be a potential starter.

Texting Violations:  Remember last week when news broke that Texas Tech has self-reported some NCAA texting violations and also imposed some sanctions?  Well, Central Florida received 2 years probation for what appears to be a much worse violation of the rules regarding texting and calling recruits as the director of player personnel placed 209 impermissible phone calls and 100 text messages.  I still don't care about the NCAA rules and regulations and if it's more serious than originally reported by the LAJ, then I'm sure I'll have to get educated quickly, but for now, this seems pretty minor.

Proposed New NCAA Rules:  According to the LA Times, the NCAA is considering a proposal that could wipe out scores for taunting while on your way to a touchdown and toughen standards for treatment of concussions.  Re. the taunting, I just wonder if this is going to be one of those situations where the players aren't even going to be allowed to celebrate, which I hate.  And keep in mind that taunting can be fun: 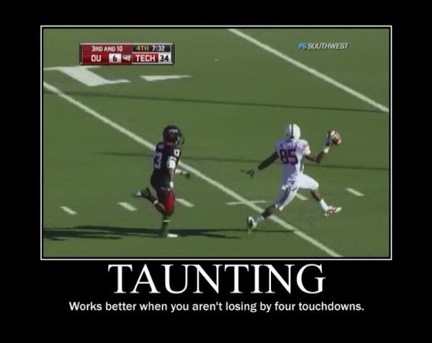 Fan Support: DT's Mike Graham writes that the men's basketball team would love your support on Saturday afternoon as the Red Raiders take on the Aggies.  PF Darko Cohadarevic thinks the fan support makes a difference:

"Since I came in here, I’ve kind of liked going up against A&M, it’s a big rivalry," he said. "It’s something going on between us and A&M. I think the students can help us if they come to this game, if they just show up, and with 15,000 people in the arena, we have the chance to beat anyone."

And PG John Roberson acknowledges that this is a big game to remain in the Big 12 race:

"It’s Texas A&M," Roberson said. "They’re our rivals. It’s going to be alive, everyone is talking about this game especially since we need this game to be 5-5. It’s a huge game for us as well as being a rivalry game. I just hope everybody comes out and supports us."

Alumni Game:  Don't forget that the Alumni Game starts at 1:00 p.m. on Saturday, a perfect warm-up to the basketball game later in the afternoon.  For those of you who might make the excuse that you can't afford to go to both, keep in mind that the baseball game is FREE!  DT's Mike Graham writes that the roster won't be announced until sometime today, but former pitcher Chris Richburg will be there.  Head coach Dan Spencer is hoping that the alumni gives the current squad all sorts of fits:

"I hope the alumni runs their mouth because that’s part of it," he said. "I hope they make our guys uncomfortable, and I hope they score a couple of runs early and make us press. Most of those alumni guys are pretty good. They’ve earned the right to run their mouths a little bit in the alumni game."

"It’s going to be fun playing against guys who have already played here," Tech catcher Jeremy Mayo said. "It’ll be a good way to get our season started. It’s a way to get a jumpstart ahead of the season instead of just being thrown in there the first day."