Share All sharing options for: 2010 Week 5 Report Card (and a little bit more)

Ok everyone.  It's Thursday.  It's time to get constructive.

Complaining and moaning for the rest of the season is going to get old pretty quick - even for those of us who love to complain and moan (myself included).

We're the Double-T-Nation.  We're supposed to be better than that.

We don't pump sunshine. We analyze.   We don't out-moan the competition. We make fun of them (and our Administration of course).

Besides if the best we can do is be negative, then TTUMAR's never coming back here.  We can't have that, can we?

Let's find out after the jump.

As hard as it might be to find some bright spots in Saturday night's loss, they were there.   As Seth noted earlier, our offensive line seemed to come together enabling Potts to reel off 62 passing attempts without surrendering a sack and allowing our RBs to generate over 5 yards per carry.   Neal Brown deserves praise for his team's performance, especially after the way his offense was shutdown against Texas.

Potts was highly effective in the second half.   The play calling loosened up in the second half, and when it did the offense looked like the Air Raid of old.  Our receivers for the most part played well, but dropped passes and an untimely fumble thwarted our chance for a comeback which seemed so imminent.

Yes, Iowa State might have the 84thranked defense in the country, but right now I'm looking for silver linings where I can take them.  So I'll do just that, thank you very much.

The first thing we need to do is get rid of the excuses.

The old adage about excuses is as true in this case as it is in most (speak to Blackbeard if you require further clarification).

This year's Texas team is by no means better than the Texas team which played for the national championship team last year.  Although the loss to Houston was frustrating last year, the Cougars finished 10-4 and were led by a Heisman caliber quarterback.

The 2-2 record of 2010 is a far cry from the 2-2 record of 2009.  Losses to a rebuilding Texas squad at home and the Big 12's perennial doormat Iowa State are not the same as the losses which we endured at this point last year.

If we had beaten James Madison by 1 point on a Hail Mary with no time left on the clock, we would not be singing "Glory, Glory" and be rejoicing in our victory, just because it's a victory.  We'd probably be a little concerned.  We'd probably be feeling worse about our team's fortunes if, for example, we lost to Oklahoma 62-0 than we would if we lost to them 35-34 on a last second field goal. All losses and all wins are not the same.

"We had bad losses before"

I'm not sure I understand the continued attempts to point to Leach's worst losses as a way of excusing Tuberville's loss to Iowa State.  I don't recall a single one of us excusing our loss to Texas A&M last year as acceptable because Spike lost to North Texas in 1998 (at least I think it was 1998).  Over the past decade I can't remember a single time when we graded any bad loss on a generous curve.   If we're going to talk about bad losses, then maybe we should dredge up some of Tuberville's as well.

Champions surely find all losses unacceptable (if you would like to better understand the distinction between and acceptable and unacceptable loss, click here).

"Maybe it's the Lack of Talent"

Our returning talent is better than we've ever had at Texas Tech.  This is one of our best returning classes in terms of returning starters, depth and talent.  Don't take my word for it. Look at the recruiting rankings between 2004-2006 and 2007-2009.

We may not have Michael Crabtree, Graham Harrell, Louis Vasquez, Brandon Williams or Darcell MacBath (all virtual unknowns except for Harrell prior to their arrival at Tech), but that did not stop us from winning 9 games last year  - a year which most considered to be a rebuilding year after the 11-2 season of 2008.

Under normal circumstances, it is perfectly rational to expect that a 9 win team returning 16 starters should improve upon its previous season, particularly when the upcoming schedule in question is in many ways less challenging than the previous year.   Raise your hand if you thought prior to the season that you would be marveling at the Iowa State defense and shaking in your boots over Baylor.

This year's team features plenty of future NFL caliber talent:  Cody Davis, Lyle Leong, Lonnie Edwards, LaAdrian Waddle, Brian Duncan, Eric Stephens, Alex Torres and Baron Batch (I would include Taylor Potts, but I don't really want to take heat about including Taylor Potts).  DJ Johnson and Jarvis Philips are future stars.  There's no reason to trash the talent on this team - it's there.

If talent was a problem, how did we beat Oklahoma, Nebraska and put up over 400 yards of offense against Texas  last year?  Ed Britton?

(Sorry Ed. Just using you as a rhetorical device. I was a big fan)

"It's the Inexperienced Offensive Line"

We've always had to manage significant turnover along the offensive line.  This is not unchartered territory for Tech.

In 2002, we returned two starting offensive linemen.  That year, we finished 9-5, and gave up one sack for every 16.7 passing attempts.

In 2005, we returned two starting offensive linemen.  That year, we finished 9-3, and gave up a Leach-era worst one sack for every 16.3 passing attempts.

In 2007, we returned one starting offensive lineman (Vasquez).  That year, we finished 9-4, and surrendered just one sack for every 42.4 passing attempts.

In 2010, we are returning two starting offensive linemen (Edwards and Olson).  So far this team has surrendered one sack for every 28.4 attempts.

Let's look at Offensive Line Starts in the Big 12 and team records to date.

"One-hundred and eleventh! " you say? Well, that must explain everything!

So now I'm running out of excuses.  Is Taylor Potts our excuse?  I'm not so sure.  He can't block.  He can't catch the ball.  He can't defend. He did throw for  370 yards.  If the answer to our problems is that we need a QB who knows how to run for his life on every play, well I understand the point, but then how many victories do we honestly think that strategy is likely to generate. Could Sheffield do a better job?  That's an ongoing debate which I don't want to jump in to, but I'm certain that I'd rather see Sheffield play QB than whatever that receiver/wildcat/decoy thing was that we saw in Ames.

Despite Potts' strong showing in the second half, Brown's comments about Potts playing the best game of his career were over the top.  (did I miss something or are our coaches suddenly touting offensive statistics above winning?)

What about this one?

Coach Tuberville is right.  When you generate 500 yards of offense and put up 38 points, you should be able to win most games.

So long to the Birkenstock wearing, flower-power, make-love-not-war excuse of a zone defense.

There are just two problems. Our defense is surrendering over 380 yards per game and is allowing over 30 points per game so far.   Good for the 80th best defense in the country.

Discounting the onside kick return (a freak play that normally would have been downed), the defense surrendered 45 points to an Iowa State team which currently boasts the 92nd best offense in the country.   Our upcoming games are against

It doesn't get any easier, but that does not mean that the job is impossible either.

While I'm not thrilled about our defensive performance against New Mexico, SMU or Iowa State, I see some glimmer of hope in our game against Texas.   We surrendered fewer yards to Texas (327) than Oklahoma did (373).  It's a thin reed, but I'm taking it.

Which brings me to my next point.

If our offense can pull it together and our defense becomes serviceable, we have  a chance of picking up some wins and salvaging the season.  Yes, serviceable.

Right now, instead of a Jeep (I thought Jeeps, by the way, were notorious for breaking down - who came up with that nickname anyway -what does it even mean?), I would settle for a reliable mini-van which gets the kids to school on time, and just gets the job done.

While it might be more fashionable to declare the Air Raid dead (it's not, at least the spread offense is not), maybe the defense is where we should be focusing more of our attention.

Having said all of that, among the bright spots during our loss at Ames, I would have to also include Coach Willis himself.

Willis took the heat for the defense's performance.

He didn't call it a weird game.  He didn't point to his performance in one half and blithely ignore the other.  He didn't blame the talent.  He didn't imply that this was a turnaround job.

He called it like he saw it.  Poor pad placement.  Guys in the wrong position.  Bad technique. Not making the right adjustments.

He couldn't sleep after the loss.  It bugged the hell out of him.

That's how coaches talk.  Right now, we need a lot more of that.

Look on the bright side. There's always Weber State.

All kidding aside, I have no choice but to root for my Red Raiders against Baylor.   I think we saw signs of life in the offense. Hopefully, that carries over to Baylor.   In Seth's, Tech92's, RedRaider1992's and others' posts  (including  one of Raider289's few coherent posts), they point out that maybe the team's  lights finally came on - at least judging from Potts' demeanor during his last press conference.   I hope they are right.  This is a talented and proud team.

Virginia Tech lost to the aforementioned FCS James Madison team, and rebounded to defeat 23rd ranked NC State.  If they can do it, why can't we? (Rhetorical question only.)

And if that's not enough, try it for TTUMAR's sake. 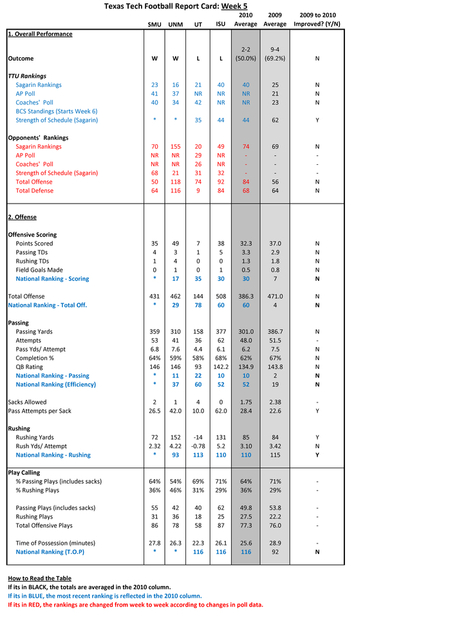 And the PDF for the Offense. 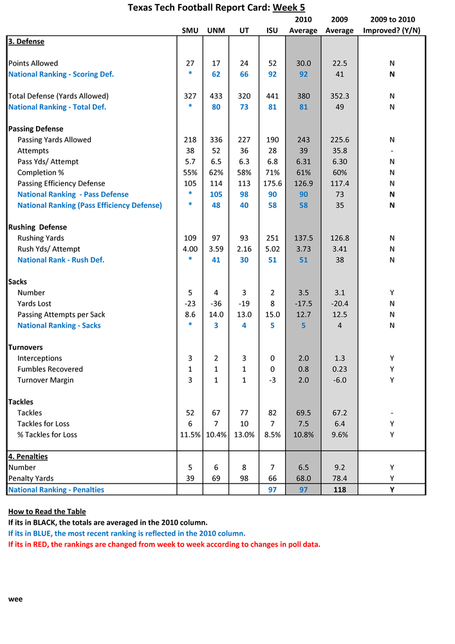 And the PDF for the Defense. 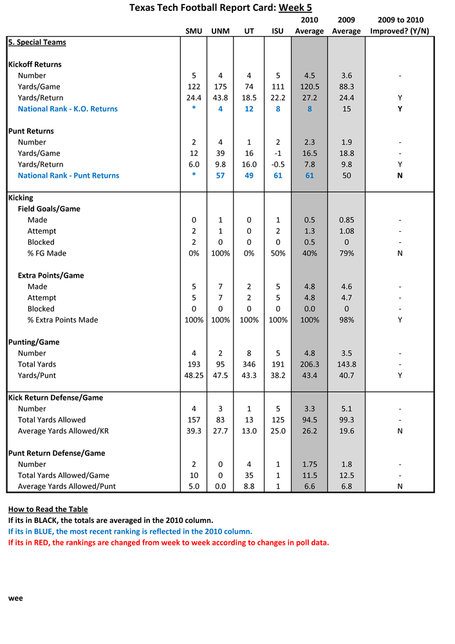