Baylor Game Links :  Just a few quick links, which includes links to the Alumni Association and where you can watch the game on Saturday if you're not going, where the crowd is expected to top out at only 50,000 fans.  Texas Tech has sold more than 25,000 while Baylor has sold about 15,000.

Saturday night I couldn’t sleep. It’s pretty difficult to write down my thoughts and what I’m feeling after losing a game the way we did. Frustration would be the best word to describe it. We didn’t play like we should have on offense, defense, or special teams. However, the season is still young, and everyone is more determined than ever, from the coaches down. We will keep working, and work harder than ever.

Sheffield Still Part of Team:  There were a couple of small articles, one from LAJ's Adam Zuvanich, who talked with RB Eric Stephens, who said that QB Steven Sheffield is still a productive member of this team:

"Sheffield as well," Stephens said. "His role has been limited in comparison to last year, but he’s still a leader on this team. Regardless if he’s starting or if he plays or anything, Sheffield has a big voice on this team."

And then there's this small blurb, and I mean small blurb, that Sheffield and RB Ben McRoy are trying to simulate Baylor QB Robert Griffin III (sometimes I wish I was the "III").

Notes, Notes and More Notes:  LAJ's Don Williams has a notebook full of goodies, including that LB Sam Fehoko has a twisted knee that may keep him out of the game on Saturday . . . that RB Harrison Jeffers and RB Ben McRoy are road-blocked by RB Batch and RB Stephens:

"The problem is they both play behind two pretty good players who had good games last week," Tuberville said. "They both play special teams, but it’s just hard to get them in. You try to work ways to get them in, you have plans to do it and then you get into a game that’s nip and tuck and it’s hard to take out guys that have experience. We have enough inexperienced guys on the field as it is. We just need to keep those guys in there that’s been in games and tough situations as much as we can."

More good-strong after the jump.

Employing Tight Ends:  LAJ's Don Williams writes about how OC Neal Brown looks forward to employing the tight end next year.  I'll go ahead and answer this now, this should make people rejoice because OC Brown doesn't feel like he has a tight end on the team (i.e. Delilah James is a senior) and yes, Mike Leach used tight ends quite a bit at Texas Tech, so I'm assuming that this will be 100% approved.  Here's Williams and OC Brown:

Tech has a commitment from San Antonio MacArthur’s Jace Amaro (6-5, 240), who is ranked as the No. 7 tight end prospect and the No. 111 recruit overall in the country. Two eventual helpers are sitting out this season, sophomore Tony Trahan (6-5, 228) after his transfer from Rutgers, and freshman Bo Whitney (6-4, 235), who is redshirting.

Brown said he likes deploying tight ends not just for what they can do but for the guesswork they force on opposing defensive coordinators. Iowa State can break the huddle with a one-back, two-receiver personnel group and morph into a four-receiver set by standing up both tight ends in the slot.

And go ahead and count me as a guy that's incredibly excited about seeing Amaro.  In his highlight film (click on his ESPN profile) he'll go out wide, which must make him a tough cover for a cornerback or a safety.  A versatile tight end can create mismatches that the defense has a tough time covering, just as CB Jarvis Phillips.  The rest of the article talks about the progress of Trahan and Whitney.

Preparing All Areas:  LAJ's Mike Graham writes that the team is preparing in all areas of the game and HC Tuberville said that the team has practiced hard:

"We had a mental day of practice," Tuberville said. "We've got a lot of work to do to get ready for a quarterback that can scramble around. They're pretty much an option team; they run a lot of option whether either they're handing it off, the quarterback is running and pitching or throwing it. So we've got to do a lot of mental preparation; we've got to do on defense.

"And on offense, we've just got to keep continuing to get better. We've got a chance to be a good offense, but you can't play two quarters like we've been playing. We've got to play for four quarters, and hopefully that's going to happen this week. Spirits are good, practiced hard."

Where Georgia Should Turn:  Esteemed Georgia blog, Dawg Sports, and T. Kyle King, is listing candidates that he doesn't think should be on the official list, but of those candidates, he thinks that Tuberville really isn't a bad option:

Tommy Tuberville (Head Coach, Texas Tech). I have to admit that, of the guys on this list who might come if called, Coach Tuberville is the one with whom I would have the least problem. We know he can win in the SEC, and, despite the fact that he was the head coach of our oldest rival, I never had a problem with him, the occasional dig about how Mark Richt needed to learn to run the ball notwithstanding. His association with Auburn doesn’t trouble me in the slightest, given the long history of cross-pollination between our two programs; if anything, the dude deserves credit for (a) being successful in the so-called Loveliest Village and (b) not getting busted by the NCAA for cheating, which is a pretty rare combination for that program. We obviously could outspend Texas Tech, he’d probably like to get back to the SEC, and, given the circumstances under which he parted ways with the Plainsmen, he’d probably have a special incentive to want to beat Auburn, which is a quality I greatly admire in a Georgia head coach. In short, while I don’t think Mark Richt should be let go, I wouldn’t squawk too loudly if Tommy Tuberville succeeded him at the helm. My one quibble with Coach Tuberville is his age; he turned 56 last month, so we’d be lucky to get a decade’s worth of service out of him. Personally, I’d prefer to hire a coach who can be here for the long term. His age, however, is the only knock against Tommy Tuberville, and, if we had to go with a legitimate candidate who’s on this list, he’d definitely be the one.

Just thought it was interesting that a program that's truly in turmoil (i.e. a head coach that everyone thought would lead that program to the next level is floundering) would even consider Tuberville.  And not only that, Texas Tech could be facing the possibility of voting in this mascot: 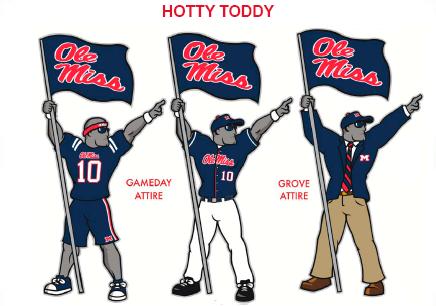 See.  Things aren't all that bad.

Miscellaneous:  Just an FYI, the reason why I'm not linking to the Waco Tribune/Herald/Journal is because I tried to click on one of their links and it's a subscription based service.  I'm guessing that you guys and gals aren't subscribing . . . FWST's Dwain Price has a notebook as well as a longer blog post about Tuberville's thoughts on RGIII . . . DMN's Mike Graham reports on the players playing in the Cotton Bowl . . LAJ's Courtney Linehan writes that fans have a right to be frustrated . . . DMN's Chuck Carlton had a chat yesterday and said that Texas Tech is confused and not very good . . .