Share All sharing options for: A Look at Texas Tech Football Graduation Rates during the Leach Years

Most Texas Tech fans are well aware of the high graduation rates of the football program's players.

Since 2005, when the NCAA introduced the Graduation Success Rates (GSR) as a revised method of measuring players' graduation rates, Texas Tech's football program has placed at or near the top of the Big 12 during each and every year that the assessment has been in place.

So just how good has Tech’s performance been over the years and particularly during former head coach Mike Leach's tenure?

The GSR measures graduation rates at Division I institutions and includes students transferring into the institutions. The GSR also allows institutions to subtract student-athletes who leave their institutions prior to graduation as long as they would have been academically eligible to compete had they remained."

There are criticisms of this methodology, but the NCAA argues that the GSR methodology is a fairer way of measuring player graduation rates than the US Department of Education's approach.

For a more detailed comparison of football program GSRs, see the impressive discussion by the folks over at The Bootleg (a blog dedicated to Stanford sports).   To evaluate specific schools, you can go directly to the NCAA.org's own website here.

In the analysis below, I limit my review to the 2007,2008 and 2009 NCAA graduation reports – the years when most players would have played for Mike Leach.

First of all, a nod of respect to the top football programs.

In 2009, the FBS football programs with the top 10 graduation rates were:

Among these programs, only Penn State finished the 2009-10 season ranked in the Top 10.  That is a remarkable accomplishment.

The U.S. Naval Academy also achieved the distinction as the only other program to finish in the Top 25.

Over the past decade, Texas Tech's football team ranked third overall in Graduation Success Rate in the Big 12.   Nebraska, Baylor and Texas Tech are separated by a margin of just one point.  These three programs lead the rest of the Big 12 pack by a significant margin. 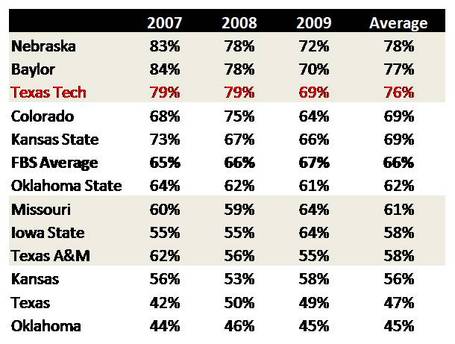 UT and OU rank last in graduation rates in the Big 12 and are in the bottom 20 of all 120 FBS programs.

Nothing more needs to be said about Mike Leach and the Athletic Department’s commitment to academics, and of course the hard work of the players themselves.  Leach might not have been able to beat Texas more than twice, but for what it is worth, Leach’s players outperformed Mack Brown's player by 30 percentage points in the classroom for a decade.

USA Today does a neat little exercise where it re-ranks the top 25 teams based on the their graduation rates. Since the NCAA’s report came out mid-season, USA Today’s rankings only included ranked teams at the time.  Below are the updated end-of-season rankings (Inside Higher Ed conducts a similar exercise using a mock NCAA bracket approach for basketball teams). 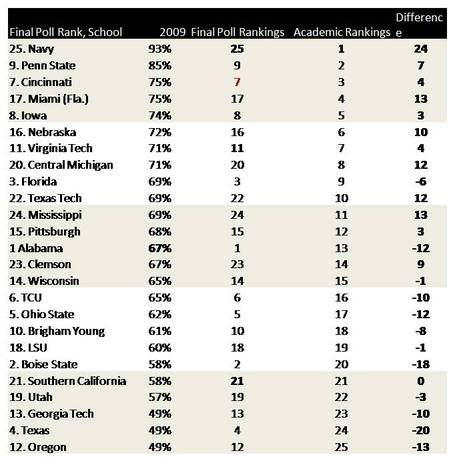 In case you were wondering...

For those of you who might be curious, Tuberville’s graduation success rate at Auburn was 59% during the same period (the same as Texas A&M).

(Possible theory:  Neckties were cutting off blood circulation to the players’ brains).

In unrelated news, the Tech men’s basketball team’s GSR clocked in at a healthy 48% over the same period (Division 1 average 59%).

For those of you who would like to see a more real-time snapshot of a school’s performance, you can examine the Academic Progress Report (APR), a reporting regime implemented by the NCAA in 2005.

Another note:  I could not find a 1-120 ranking of the FBS schools.  If someone can find a list, could you please post the link on this message board.

Final note:  Tech graduation rates declined in the 2009 report,  but so did the graduation rates of Nebraska and Baylor over the same period.  I don’t have information on these declines, but thought it would be fair to note the drop off.   Fair and Balanced.