SB Nation Relaunch:  Please, please, please head on over to SBNation.com where you'll find a lively new place to get all of your sports news.  This has been a huge problem for me lately as I would subscribe to every SB Nation college blog and within the last month, due to the tremendous growth of SBNation.com, I couldn't keep up with all of the incredible posts from thoughts from bloggers in the network and just yesterday unsubscribed to a majority of those blogs and have now subscribed to the new SBNation.com, figuring that I needed a collector of news rather than trying to do that myself.  Check out the welcome post and what SBNation.com hopes to accomplish as well as coverage in the Washington Post.

I Am Offended by this Old Caricature:  I can't believe the gall of the Rice athletic department to portray the Red Raider as a happy-go-lucky masked bandit (hat-tip The Rice Football Webletter for the cool old cartoon): 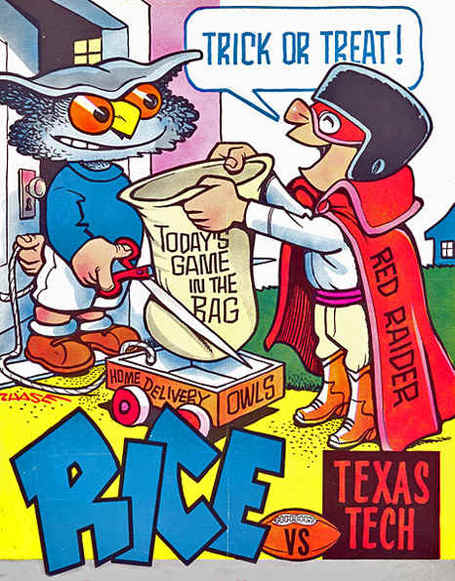 Rice Looking to Show Skillz:  LAJ's Adam Zuvanich writes that the Rice Owls are looking to show their skills as Rice defensive coordinator had this to say:

"It’ll sound crazy, but we probably have a little better chance of slowing Tech down," said Rice defensive coordinator Chuck Driesbach, whose unit allowed Webb to rush for 194 yards, a Conference USA record for a quarterback. "We thought we had a chance to slow Joe Webb down, but he proved us wrong. He was more athletic than us."

Yes, that does sound crazy.  Stopping a quality offense, no matter the form of attack, is difficult if the defense is awful, and from all accounts, the Rice defense this year (102nd in total defense) and last year (111th in total defense) was and is awful.

Tech averaged more than 100 yards per game on the ground last season. There were only two games in which it didn’t reach that mark.

It was a different story against North Dakota.

The Red Raiders averaged 2.1 yards per carry. They maxed out at 40 rushing yards — Baron Batch had 30 on nine carries while Harrison Jeffers had 16 yards on a measly two carries.

Even with less chances, Jeffers showed some of his explosion, prompting Tech coach Mike Leach to acknowledge he should have received more touches.

Texas Tech Team Report:  RRS.com's team report has lots of notes and quotes including this key to the game:

Keys To The Game:   Rice is coming off a 10-3 season capped by a win in the Texas Bowl, but the Owls were forced to reload, which was evident in a 44-24 season-opening loss against Conference-USA rival Alabama-Birmingham. Gone are QB Chase Clement, TE James Casey and WR Jarett Dillard. Defensively, the Owls allowed 412 total yards to UAB QB Joe Webb. WR Toren Dixon caught a career-high nine passes to lead the Owls.

Neglected Audio and Video:  KAMC with a report on the new Rice quarterback and receiver options.

Smart Football Gets Its Own Subject Line:  Smart Football's Chris Brown had an interesting look at how the BYU Cougars offense was able to beat the Oklahoma Sooners and give credit to former Texas Tech coach Robert Anae, who is BYU's current offensive coordinator.  Also, EDSBS asks Brown what makes an offense terrible.

National and Big 12 Links:  The most recent BlogPoll was released yesterday and the Red Raiders still sit outside the top 25 . . . FWST's Jimmy Burch wonders if the Oklahoma St. Cowboys are ready for act II, which is the Houston Cougars . . . The Daily Texas notes that Big 12 teams are now focusing on defense rather than offense and has their own power rankings . . .