Share All sharing options for: OT // Fly Fishing in the San Luis Valley

Only follow me after the jump if you want another peek into my personal life.  This time, a somewhat hectic, but incredibly gratifying fly fishing trip to the San Luis Valley in southern Colorado.

I readily admit, that I'm not a huge fisherman.  I've never fly-fished before, so this whole thing was a new experience.

I won't bore you with too many logistics, but myself and Brandon (Texas Tech grad) left the DFW area on Wednesday after work and arrived at another friend's apartment, Matt (Texas Tech fan), at around two in the morning.  Up early on Thursday morning to pick up my brother-in-law, Justin (Texas Tech grad), in Amarillo and we were on our way to Trinidad, Colorado, to meet up with Lee (Texas Tech grad) who lives in Trinidad and his friend Clayton (Baylor grad).  We arrived sometime in the afternoon, went to Wally-World to buy fishing licenses and were on our way to the local lake. 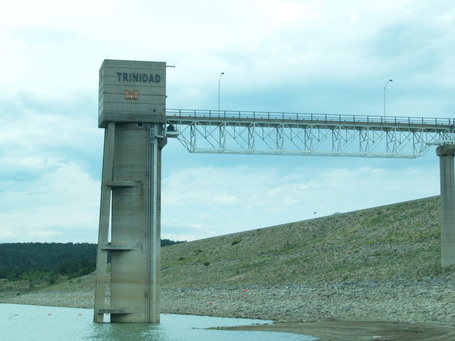 We were going to be fishing for dinner and we arranged ourselves along the bank. 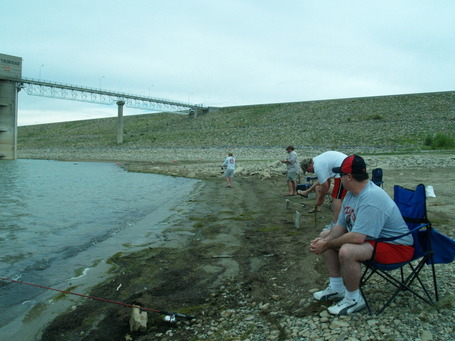 The biggest disappointment of the trip was that when we stopped in Dalhart to pick-up Texas-beer, I was shocked to learn that the gas station had a walk-in cooler, but no High Life.  Rather than drive out of our way, I did the next best thing, which was grab a thirty pack of the Yellowbellies and a thirty pack of Pabst Blue Ribbon.  This explains the Yellowbelly at my feet. 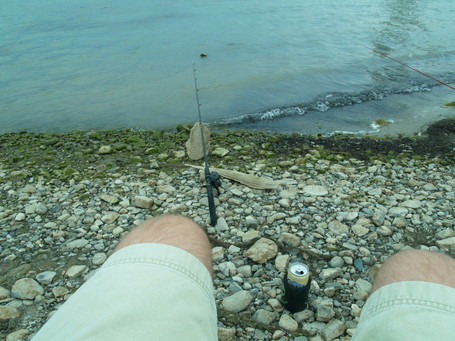 The mountains where we were headed for the next day are peeking through the clouds. 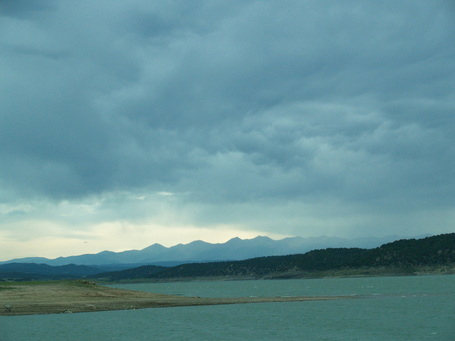 We get back to Lee's, start frying some fish and potatoes, have more than a handful of brew and eventually hit the hay (I actually hit the hay before anyone else as I was tired).  The next morning, we are on our way to our destination and and meeting our fly-fishing guides, Spencer and David at 9:00 a.m.  We're headed out to the Calabra River to a place that our guides' boss owns.  It's a marshy area and the river is not what I was thinking when I was thinking of fly-fishing.  I think with the photo below you have a pretty good idea of what I'm talking about as far as the terrain. 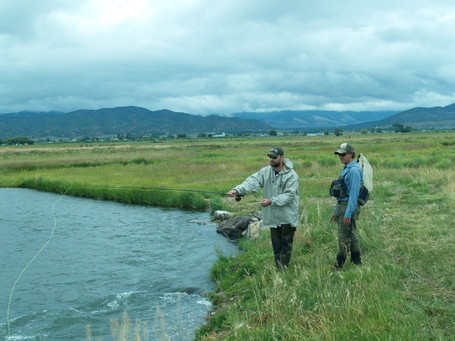 This is your faithful and intrepid blogger trying not to look completely silly and you might not be able to tell, but it was about as peaceful as it looks. 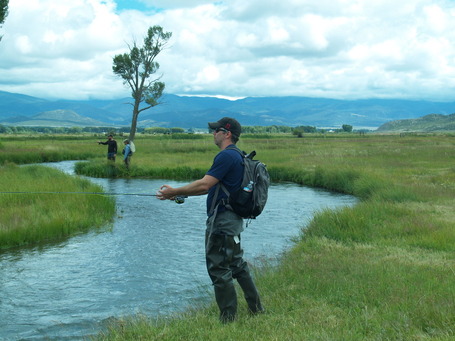 We had split into groups and Clayton, Lee and Matt caught some good size trout (I think 18 to 23 inches).  Justin (I think) caught the biggest one of our group. 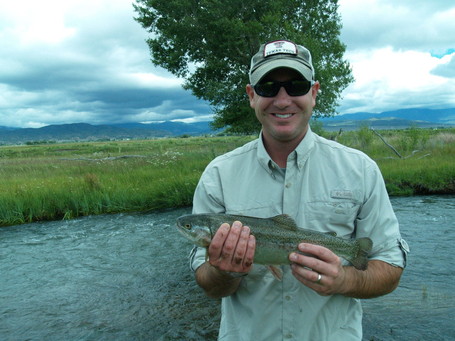 Rather than drive the 1 1/2 hour back to Trinidad we had decided to camp out for one night at some place (I can't remember the name of the town) where it's free to camp and fish.  Fortunately for us, we were sitting underneath a decent sized Colorado afternoon rain shower.  The rain let up, we set up the tent and by that time we were way overdue to settle in and have some brew.  We're getting up relatively early to meet Spencer and David the next morning so there's no crazy late night shenanigans.  This was just before sunset. 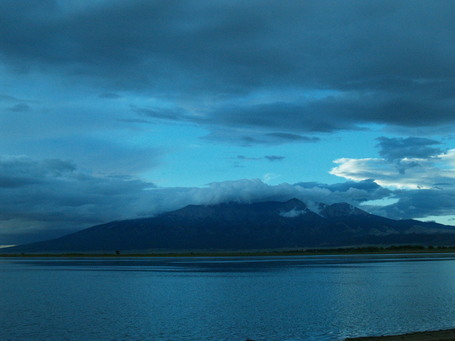 Saturday we're off to some ranch that Steve Forbes had supposedly just sold.  I have no way to verify any of this, but I was also told that it was 256 square miles of Colorado country-side, complete with mountain stream that had not been fished in a month.  This is a look at where we were eventually going to end up fishing. 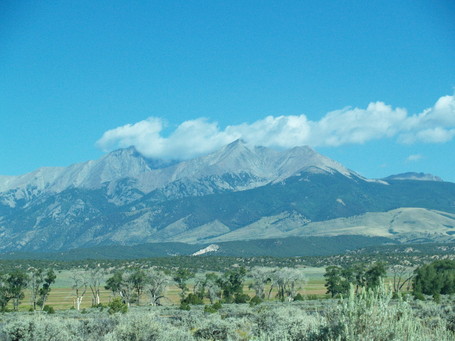 Now, this was a true mountain stream, complete with river-rocks, smaller trout and quite a bit of brook trout.  This was what I was picturing when I thought of fly-fishing. 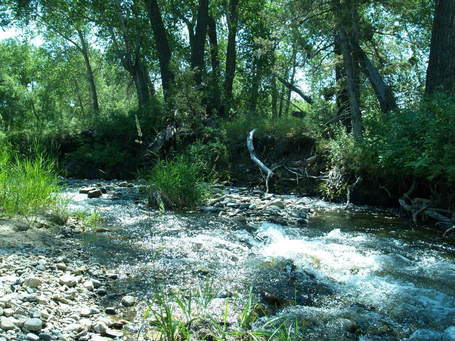 We fished all day, I caught a handful of trout (all fish were catch-and-release) and brook trout.  I think everyone else had similar and even more successful days fishing.

Want to know what a blogger looks like (remember it's Saturday at this point) without a shower since Tuesday after work?  Hello, ladies. 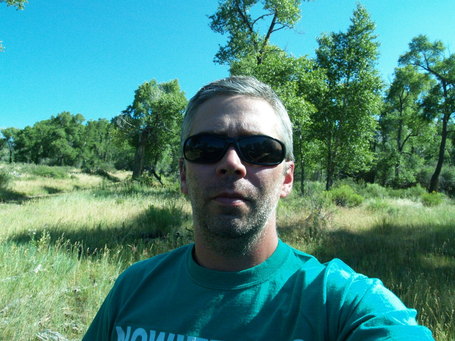 A huge part of the success of this trip were our two guides, who taught us a ton of stuff (i.e., how to fly-fish).  I cannot recommend either of these two guides more highly.  In fact, Spencer has taken Bob Knight and some of his buddies on some fly-fishing trips (Knight is apparently a very accomplished fisherman, and the guide is more or less there for Knight's friends).  If this is something that you've wanted to do and you're going to be in southern Colorado or northern New Mexico then shoot me an email and I'll pass along the contact information.

Saturday evening, we drove back to Trinidad.  Showered.  Ate some dinner.  Myself, Matt, Brandon and Justin headed back to Lubbock (we didn't pull into Lubbock until three in the morning).  Got up early on Sunday and headed back to DFW. 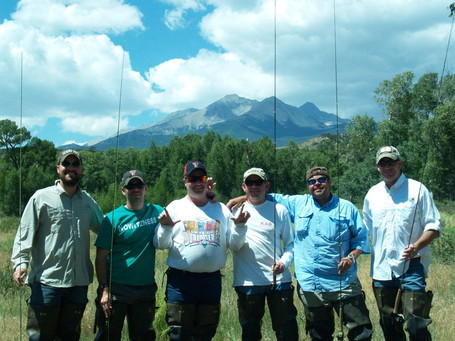