Gone Fishing:  This will probably be my last post until Monday, and I really am going fishing for the next couple of days, somewhere in Colorado.  I'm not expecting to have any internet access so don't count on having me around for the next four days.  The only thing scheduled is a preview of the Aggies, scheduled for Monday morning and I'm trying to get something for discussion for Friday.  Put your feet up, and feel free to post various FanPosts and FanShots to keep everyone entertained until I get back.

"I’m more than ready to play this year,’’ Bullitt said. "I’m going to prove it, especially when we get the pads on. There’s going to be some hard hitting going on.

And secondary coach Carlos Mainord has high hopes for Bullitt:

"I like him,’’ Tech safeties coach Carlos Mainord said. "He’s a physical player. He’s a tall, rangy player that has good speed. I think he has some good instincts. Of course, he’s from a football family, so it’s important to him. I think I’m going to like him.’’

Meanwhile, offensive line coach Matt Moore thinks that Waddle is going to be worth the effort to recruit:

"If he would have grown up in a suburb of Dallas and played at a high school in Dallas, he’d probably have 25 offers coming out of high school,’’ Moore said. "He wasn’t an easy guy to recruit. It was a 21/2-hour drive from Houston. It was a 21/2-hour drive from San Antonio. So I spent a lot of time on the road, but I think it’s going to pay off.’’

Tech Notes:  LAJ's Don Williams Tech Notes has you covered :: WR Landon Hoefer has been offered a graduate assistant job with the Memphis Tigers, so he's ending his playing career, congrats to Landon on the opportunity and we wish you well . . . S Cody Davis is laying it to receivers, in particular WR Austin Zouzalik:

"I don’t really think about it," he said. "Once the ball’s in the air, I’m just trying to do the best I can to make the best play I can. Once it gets closer to the season, I might start worrying about the offense a little bit, but I’m not going to pull up right now."

DMN Preview:  DMN's Chuck Carlton previews Texas Tech as well as has a feature story on the Red Raiders and there's this bit on WR Detron Lewis and those prognosticators who do not think Texas Tech can reload:

Lewis said he understands the skepticism that surrounds Tech, the idea that the Red Raiders will go back to winning seven or eight games this season.

He has dealt with slights before. He played his high school football in College Station and dreamed of playing at Texas A&M. The Aggies never offered him a scholarship, and he helped Tech reach new heights last season.

"We have a really good program," Lewis said. "We just want to prove everyone wrong. We're looking forward to the challenge. We're not going to be given any respect this year. We're going to have to take it and earn it."

More Boone:  As most of you know, Ocala, FL, WR Kadron Boone committed to Texas Tech yesterday and Ocala.com's Andy Marks talked with Boone after his decision to pledge his undying love to the Red Raiders:

"Me being a receiver and the way they throw the ball," Boone said, "that's going to be one thing I had to really look at. Another thing is I get along with the coaches great, the recruiters, my receivers coach. I talk with Coach Leach all the time. He's a good guy. They've been straight-up guys who told me what I wanted to hear.

"They want me to come in and be hungry, just be ready to play." 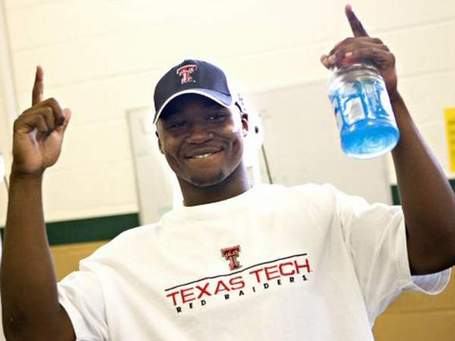 "I really didn’t think they recruited this area,’’ Boone said. "Some guys don’t want to leave Florida, but I just pictured myself in that offense. When they recruited me from this area, I was like, ‘Aw man, this is nice.’ My recruiting coach, Lincoln Riley, did a heck of a job. Any question I had, he had an answer for me ASAP. I’m just happy to be a part of the family now.’’

Congrats to Carter:  Per the official site, congratulations are in order to OL Brandon Carter, who was named to the Outland Trophy Preseason Watch List by the Football Writers Association of America.

Neglected Audio, Video and Photos:  Fox34 has a couple of embeddable (hint: this is a good thing) on yesterday's practice:

And a bit from Brandon Carter as well as a change in the defensive attitude:

And practice highlights from Monday:

Alumni:  The Denver Post's Jeff Legwold on DB Darcel McBath making a move in the Denver Broncos training camp . . . SAEN's Tom Osborn on DE/LB Brandon Williams, who the Dallas Cowboys think he can make a difference this year . . .