New Front Page Author:  LondonRaider has been an integral part of this website for quite some time, and to be honest he may be the most recommended member in this community.  In any event, I thought it was high time to promote LondonRaider to the front page, just in time for football season.  I appreciate LondonRaider joining the DTN staff and I'm definitely looking forward to having him write for DTN.

More on AAU and Basketball:  This really has nothing to do with Texas Tech basketball, but wanted to mention this whole mess about AAU teams charging coaches huge "admission fees" for a roster or entrance into the event.  The NY Times Stephen Danley also writes that these fees can be detrimental to the players who are hoping to get noticed.  Someone is selling their information and I have to wonder who's making the money?  The bottom line with all of this is that I'm tired of AAU basketball and would love to see it end on a permanent basis.

Svelte Henley:  LAJ's Don Williams features a more slender DE Rajon Henley, who has lost 15 pounds or so in order to make the transition from defensive tackle to defensive end.  Henley is looking forward to his last year with Texas Tech:

"I think I’m a little bit more excited about this season, it being my senior season and my last go-round," he said. "I feel I’m going to have a strong senior season. A lot of people feel the same way. I was impressed that I was able to work the way I did this summer, better than any other summer I’ve had before."

And his position coach, Charlie Sadler, had this to say about Henley:

"I think he’s going to be a very good defensive end for us," defensive line coach Charlie Sadler said. "The thing is, we went into spring ball and he basically worked there every other practice with the thought of seeing what he could do, to see if he could be an end. If he gets all the reps there in fall camp, then I think he’s going to make some real big strides as far as what the position entails."

Red Raiders Football Notebook:  LAJ's Don Williams has the scoop on a bunch of items:  some of the freshmen defensive backs are working in with the veterans and in looking at a starter opposite Jamar Wall, right now it's LaRon Moore, Taylor Charbonnet, Brent Nickerson and Nathan Stone . . . freshman safety Daniel Cobb is making an impression by picking off a pass in two consecutive practices along with a brief depth chart of Cody Davis with Franklin Mitchem, Brett Dewhurst with Julius Howard, Daniel Cobb with Will Ford, and Jared Flannel with Terrance Bullitt . . . inside receivers coach Lincoln Riley is expecting big things from WR Tramain Swindall:

"I just expect more out of Tramain," Riley said. "I expect him to make more plays. It’s not like he’s done a lot of bad things. It’s more, we expect him to be a guy who steps up and makes big plays, and he hasn’t done that as much as even he did last season."

Leach Set to Take Stage:  The Broadcast Booth's Brian Jensen has a photo of next months Texas Monthly, featuring your humble Captain, Mike Leach.  I'll let you decide if you like it: 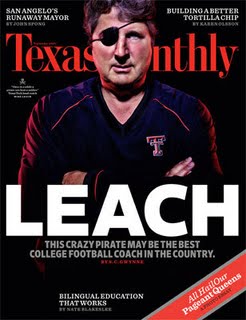 Dropping off the Polls:  Notre Dame blog The Blue-Gray Sky with a look at the teams that gained the most and lost the most from last year to this year's preseason poll.  Naturally, Texas Tech is one of the biggest "losers" because they went from being in the top 15 to being just outside the preseason coaches poll.

The Offense Will Fall off the Face of the Earth:  I still don't understand how writers can continue to write that it's going to be incredibly tough for Texas Tech to replace Graham Harrell and Michael Crabtree.  Texas Tech has consistently been one of the top offenses in the Big 12 under Leach so its puzzling to think that the Red Raiders will some how not be able to move the ball or put it in the endzone this year.  In any event, AthlonSports.com ranked the top 200 fantasy quarterbacks and your bearded QB, Taylor Potts came in at #6, right behind OU's Sam Bradford and just in front of UT's Colt McCoy.

Scouting the Enemy:  Barking Carnival's Henry James takes a close look at the OU offensive line (hint: they're the best in the history of ever) . . . Corn Nation's Husker Mike previews the Kansas St. Wildcats . . .

Crabtree Nugget:  So we all know that WR Michael Crabtree is still holding out, and there's been a ton of buzz about Mr. Crabtree's infamous family member who told someone that Crabtree would sit out the entire year if he didn't get the contract he wanted.  Enter DallasBasketball.com's Mike Fisher, and I'm going to blockquote the entire bit, but go give Fisher a click or two:

I have what you might call "second-hand knowledge’’ of the Michael Crabtree matter. Second-hand in the sense that I was sitting right there as my man Nate Newton was engaged in phone conversations with David Wells, the Dallas-based bodyguard/bail bondsman who happens to be the cousin and advisor of Crabtree, the spectacular Texas Tech receiver engaged in a rookie-contract dispute with the 49ers.

That’s creating the impression that Crabtree is some sort of a "diva’’ when in fact, all we’ve got here is a cousin who thinks Michael is "the best player in the whole draft’’ – the sort of thing an agent wouldn’t say but the sort of thing a relative would say.

On Friday, David Wells popped off one more time, to ESPN’s Joe Schad. And then after that, I’m told, Team Crabtree convened and – led by Eugene Parker, as it should be – ordered David Wells to quit talking to reporters.

Maybe we can just let Crabtree and Parker work things out by themselves.