Don't forget about these guys as we celebrate the 4th of July. 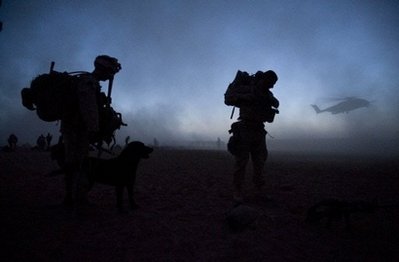 US Marines wait for helicopter transport in Helmand province. A US soldier is believed to have been captured by insurgents in Afghanistan, the military said, as a commander for a hardline Taliban faction claimed his militia had the trooper.  (AFP/Manpreet Romana) via d.yimg.com

Not going to get political, just think a good thought for our troops today and tomorrow.

Rutgers blog Protect R Turf is previewing the most anticipated college football games of 2009 and they've tabbed the Oklahoma Sooners @ the Texas Tech Red Raiders as the #12 game:

If you watched Texas Tech's triumph over the Longhorns in Lubbock last year (and how could you miss it - Harrell to Crabtree has been replayed all off season), you know that a big game means everything to the Tech fans.  From Raiderville to Mike Leach's ridiculous comments to the media to the Red Raider jokers in the first row to the rushing the field (twice) before the end of the game, that was one of those special college football games that happens only ever so often for a program.  Their version of Rutgers-Louisville '06, if you will.  The Sooners will come in with all of the hype (as usual), especially if they're undefeated, and we'll see if the Red Raiders can hang with them, especially in the early going.  A big game in Lubbock means the world to them, and in the last 2 years the Techies have knocked off both of the big boys in Lubbock (Texas and Oklahoma both).

FOOTBALL OUTSIDERS: Football analysis and NFL stats for the Moneyball era - Authors of Pro Football Prospectus 2008
I'm just giddy about this, but Football Outsiders has released their preview for the Big 12 South.  I can't say I understand all of the numbers, but I love this stuff.  If you're a stats guy, you'll love this book.

Wait, does Texas need more from its running game? - Dr. Saturday - NCAA Football - Rivals.com
In fact, if there's any incentive to shift a heavier burden to the running game, it's keeping McCoy upright; he's never been seriously injured, but after well over 300 carries through the years by a guy who doesn't know how to slide, there have to be fewer sands left in that hourglass. Texas can't afford to lose its quarterback, which seems like a good enough reason to shift some of McCoy's carries to the backs. But that's just spot relief. Assuming they still let Colt throw at least 30 times a game, the results speak for themselves: The Longhorns' title drive is only going to be derailed by another offense -- like Texas Tech's last year -- explosive enough to set the pace, or at least keep up with it. Unless McCoy's arm goes limp between now and October, there's no reason for Texas to let off the pedal.

2009 OU Football Preview: Running Backs/Fullbacks - Crimson And Cream Machine
In addition to a Heisman winning quarterback, the nation’s top tight end and at least one game breaker at receiver (tight ends & receivers preview coming next) Oklahoma also returns two 1,000 yard running backs. The significance of this is that the Sooners return 100% of their rushing yards in 2009, along with every significant passing yard, to make up one of the top backfields in the country.

Pat Knight and Gary Williams Should Have Lunch

We recruit 'em ['em being one-and-doners], but whenever we do we get yelled at for recruiting 'em. You know, I got yelled at for not cheating this year. It's unbelievable. They were yelling at me because I wouldn't cheat.

But I mean, that's where it is. I've been in it a while now, I guess 31 years as a head coach, and there's a lot more cheating going on right now than I've ever seen before.

The penalty that the Alabama football team got, for instance; they have to forfeit games, ok? And they get probation for three years or whatever it is. That has nothing to do with what you're gonna do this year. You can go to bowl games, you can play on TV. When we got our sanctions in 1990 we could not play on live television, we could not to go to the NCAA tournament for two years, we lost three scholarships and we had to give back a ton of money. And so basically they took the legs out of our program, because you can't recruit players to the ACC without television, NCAA Tournament hopes, things like that.

I'm a little concerned. I don't want to sound like the old head, like things aren't the way they used to be, but something has got to be done. Because you look at the teams this year that were very successful, a couple of them have been outed for what they did. And next year, when it comes time for college basketball to start again, they'll talk about certain coaches as being great recruiters that I know cheat, you know. And I could be a great recruiter if I was giving kids money, or if I was changing grades on a kid, I'd be a great recruiter, but that's where it is right now.

I have no idea what the Examiner is and who Rich Zvosec is, but he did a short off-topic interview with Pat Knight.