Share All sharing options for: Recruiting on the High Seas: WR Shawn Corker

The Red Raiders got some ridiculously awesome news today as Cardinal Gibbons (Ft. Lauderdale, FL) receiver Shawn Corker committed to Texas Tech.  I know, we all need to stay calm and collected, but Corker is an exceptional player and if all things go according the Captain's master plan, he'll be in Lubbock in 2010.

Without further ado here's the measurable and lots more stuff, including video and quotes after the jump (that's a tease!):

All things considered, Corker has the looks of an exceptional receiver.  He knows how to go up and get the football and physically dominate receives.  The footage seems to indicate that he has to adjust to the pass quite a bit, but the fact that he does is a good thing.  I also really like how he catches the ball with his hands, and not his body.  That's a good sign. No reason to keep you waiting:

The ESPN profiles are usually the ones to go for information like this, but unfortunately, Corker hasn't been rated by ESPN.  Never fear, when it gets posted, and it will, I'll be the first, second, or third person to point you in the right direction.  For now, you'll just have to trust your eyes that the kid can play.

There are a lot of things to like about Corker-- he is very well rounded and productive in many facets of the game. He has good size and the potential to develop some strength and bulk which will give him more of a presence in traffic. He possesses impressive stop and start abilities that he employs as a route runner with double moves and stutter moves that get DB's to bite and creates separation. He is utilized in the vertical passing game quite a bit and displays the necessary speed to consistently test people deep. Attacks alignment, stutters, eats up cushion and shows burst out of the break in the short-to-intermediate passing game. He has strong hands and attacks the ball away from his frame.

For those of you who don't know, one of Corker's high school coaches is Matt DuBuc, who also happens to be a former Red Raider.  So yeah, Texas Tech did have a built in advantage.  Earlier in the year, there was a Miami Herald article on Corker and DuBuc, who's believed in Corker for quite some time:

''Shawn is still a work in progress,'' DuBuc said with a smile. ``But when he puts it all together, he will be something very, very special. He is a smart kid who picks things up very quickly, and that's been one of the reasons why he has elevated his play the way he has.''

And the comment about Corker being a smart kid isn't lip-service.  He has a 3.6 GPA, which is much better than I ever did in high school and academics are important to him:

"Tech's always been my No. 1 school," he said. "I was blessed with a lot of offers, but what stood out about Tech was, first, the academics. Their 79-percent graduation rate of athletes means a lot. I'm big on academics, I've got an 1150 on my SAT and a 23 on my ACT and I'm carrying a 3.5 GPA, so I'm big on academics."

We've all wondered if and when, Michael Crabtree's success would benefit Texas Tech, and I think  it's already started.  Obviously, this isn't quantifiable, but I would be quite a bit of money that there's at least some benefit.  Let's hope that Texas Tech isn't done just yet in this area.

I was beginning to get a bit worried about whether or not a receiver was going to pull the trigger on Texas Tech, but Captain Mike Leach's patience paid off, quite nicely I might add.  In any event, I don't know whether or not Leach get's fired up about anything, but according to Corker, he was excited about his commitment:

Corker had the chance to break the news to Coach Mike Leach. What did the Tech head coach have to say," He was very excited about me committing to them. He was fired up. He told us that it is great to be able to recruit nationally and land someone like myself," Corker said.

I think it's also important to point out that this was Lincoln Riley's guy and kudos to Riley for such a huge commitment:

Corker was recruited by coach Lincoln Riley. He felt the receivers coach was not only a great coach but one that Sean could relate to," Coach Riley is great. He is a very good coach and I feel that my skills will improve greatly with him watching over me the next four years. He would discuss with me what I needed to work on. Coach Riley felt if I worked on the little things that my game would improve," Sean Said.

Shawn, welcome to Texas Tech and Git Your Guns Up!! 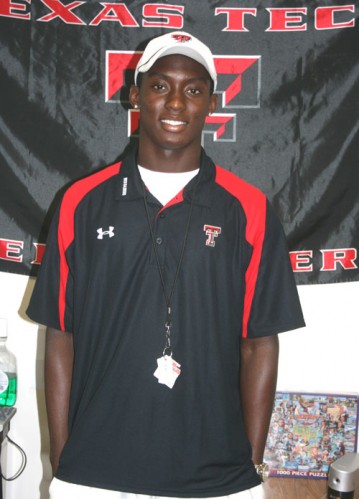