I had a great time in Surfside this past weekend.  On Saturday, I caught my limit in Kingfish and Red Snapper (everyone on the boat caught their limit) and on Sunday we tried to catch shark on the beach, and really only got one bite the entire day.  Still, a day or two of fishing is better than working.  It's good to be back and I'll try and post some photos later this week.

I admittedly have not read the anything on the internet or newspaper in 4 days.  I do know that Tom Watson lost the British Open on a playoff,  but that's about the extent of my sports knowledge over the last 4 days, so I've got to get caught up a bit, although it appears that nothing huge happened while I was out.

Huge congratulations to former Red Raider WR Dave Parks who was enshrined in the College Football Hall of Fame:

"They dipped way back to get me,’’ said Parks, a Red Raiders end and defensive back from 1961-63. "I never really thought about this. I didn’t know there was anything going on (behind the scenes). I wasn’t worried about it or thinking about it or anything else, and then I find out I’m in. It was like finding a dollar on the street — actually, more than that.’’

The College Football Hall of Fame classes are feted with a year-long series of appearances. There was an on-campus salute in the fall by each honoree’s alma mater; a December induction ceremony in New York City; a group trip to the Fiesta Bowl in January; and the climax this week in South Bend.

"I was shocked with it,’’ Parks said. "I didn’t think I would enjoy it that much. But I’m enjoying it more than anything I’ve ever enjoyed I believe, mainly because it’s so dadgum organized and it’s just a bunch of good people.
"They take such good care of us, it’s a pleasure to be around. Now I might miss it.’’

Parks spoke by phone from South Bend, where he took part in a golf tournament Friday. The weekend also includes an autograph session and a parade.

Parks was one of a kind back in the day and although the following video appears to be the only actual football on the internet of Parks, the following is "The Catch" as the Red Raiders, along with Donny Anderson, beat the Aggies in 1963:

There's some video and a story by Post Leader's Bryan Schlosser on QB Graham Harrell's signing with Saskatchewan and wearing a shockingly green Roughriders hat (just used to seeing Harrell in a black Texas Tech hat).  For those of you not real familiar where Saskatchewan actually is, Google Maps is here to help.  Maybe he and WR Eric Morris can get in some good hunting while visiting our neighbors to the North and win a few football games in the process.  The Roughriders are supposed to be a pretty bad team, although they won their first two games, they just lost their third game and it wasn't close.  It will be interesting to see when and where Harrell will get his shot and how long it will take him to get implemented into the offense.

Leach Speaks on Behalf of the Wolfpack

Remember when DTN noted that Captain Mike Leach would be the key-note speaker for the Governor's Dinner, the major fund-raising event for the Wolfpack?  Well, mission accomplished and Leach is still trumpeting the 64 team playoff proposal, although he gives credit where credit is due for his inspiration:

Evolution of the Spread

I haven't had the time to read ESPN's Mark Schlabach's article on the evolution of the spread and also thought that ESPN's Jeff Miller specific look at the spread in Texas high school was also at a glance very interesting.  I'm going to try to get to these tonight.

Per ESPN's Tim Griffin, the Red Raiders who will be appearing at the Big 12 Media days are . . . OL Brandon Carter, CB Jamar Wall and DT Colby Whitlock.  An interesting and nice group of players.  I've only heard a little bit of Whitlock and it will be interesting to see him on the big stage for an entire day.  I'm also happy to see that Wall is making the trip, and I think Leach likes to give the microphone to his seniors if at all possible. 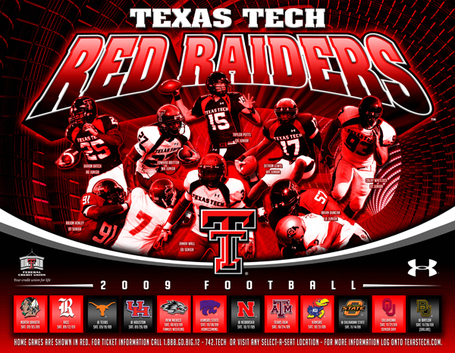 I had no idea that Martin Zeno was playing in Greece, per DT's Alex Ybarra, former Red Raider Martin Zeno won a championship with Sea Star APOEL won the Cypress League championship.  From what I've been able to find, Zeno averaged 9.4 points, 2.9 boards and 1.0 assists a game.  And Zeno will not play for Greece next year, but will try and hook up with another European team.  Here's Zeno on the experience:

"I just think life will play its course out. I really can't say. I can't bash Europe because it was pretty good. I'll just see how everything goes, how it all works out. I'll just play it as it goes, that's how I feel about it."