Share All sharing options for: OT: Smoking Ribs on a Small Charcoal Grill

If you care nothing about some off-topic discussion on me learning how to smoke ribs on a small charcoal grill (pictures included), then just ignore the entry and we'll return to your regularly scheduled programming shortly.

My wife was going to be out of town for the weekend, and I started to think that I wanted to cook out, but wasn't sure what I was going to cook.  I have a propane gas grill, but wanted to do something that would take longer than 30 minutes and so I started to investigate whether or not I could turn my charcoal grill into a smoker (I thought that someone would have already tried doing this).

I should go ahead and answer the question, why didn't I just go ahead and go buy a smoker?  Yeah, I could do this, but the truth is that I really don't want to spend $400 on a quality smoker until I'm sure that this is something that I'll absolutely enjoy.  I was pretty sure that I was, but it just seemed a bit wasteful, especially on a whim.

I found this article about how to turn your kettle grill into a smoker.

I have this grill and I started thinking that this was actually better than the kettle grill in the link above because it was square and I'd be able to find aluminum pans that would fit perfectly inside the grill. 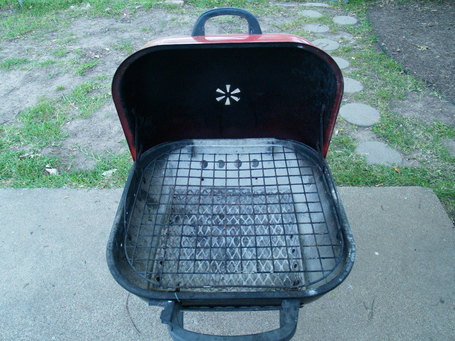 I followed the instructions pretty closely in the article linked above, but decided to add some bricks between the charcoal and the water pan in order to help regulate the heat (i.e., I didn't want to burn the ribs).

Early Saturday morning, I got up, went to the store, bought Mesquite wood chips and the biggest rack of pork ribs I could find.  After getting home, I put a dry rub onto the ribs and threw them in the refrigerator until later in the afternoon.  I also threw the wood chips into some water to let them soak as long as possible.

Here's how I built up the grill, sans charcoal. 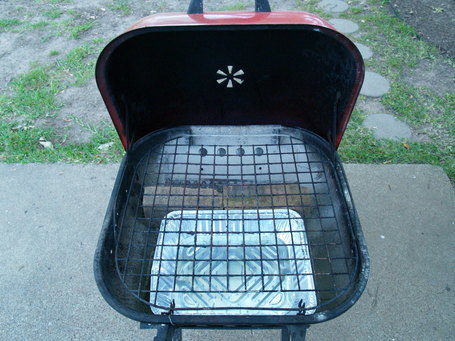 And here's the ribs as I initially placed them on the grill (at this point, I'm pretty giddy with anticipation): 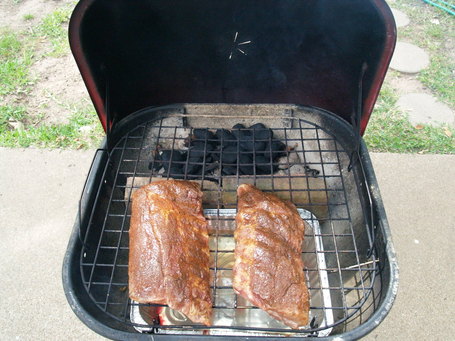 You can see in the picture above, there's a thermometer poking into the right side of the grill.  I moved that to a hole closer to the charcoal to help me regulate the temperature.  Again, I was trying to keep an internal temperature of 225 to 250 and I'm thinking that because I'm trying to smoke on a very small scale and on a piece of equipment that's not as thick as the metal on a real smoker, keeping track of the temperature was somewhat tedious. The use of vents, additional charcoal, and wet wood chips were vital to the process.

Of course this wasn't a problem because my wife was out of town and I had plenty of beer.

Here's the ribs about half-way through the process and in the second picture, you can see where the meat is starting to separate from the bone: 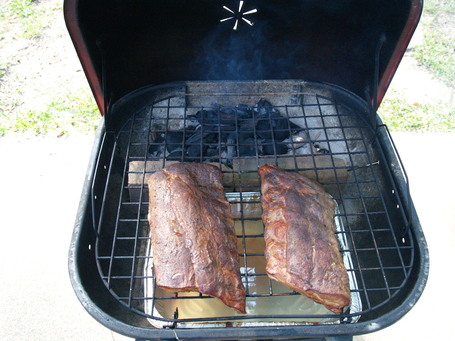 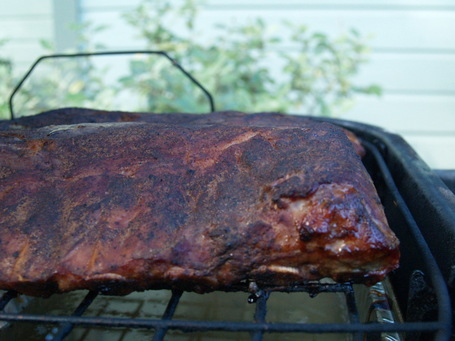 This is some of the beer I consumed while the magic happened inside of my grill: 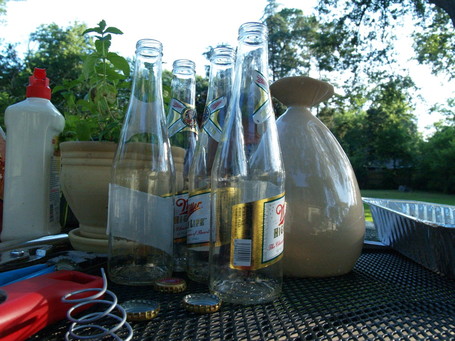 Because the ribs were pretty thick, the directions stated that it would be two hours before they'd be ready, however, I thought that they at least needed to go about 3 hours.  My thinking was that it was better to be safe than sorry and although I could cook them too long, as long as I kept the temperature somewhat low, the likelihood of over-cooking them was pretty low.  As a result, I had the ribs going from about 3:45 until 6:46.  I let the ribs rest for about 20 minutes before devouring.

And here's the final product: 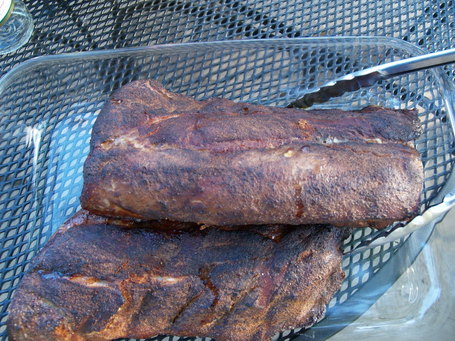 I must admit that these were some damn fine ribs and aside from being one of the best times I've had in quite some time, this little experiment proves that you don't have to have a fancy smoker.

If you've got about $50 (to buy a grill, wood chips, and aluminum pans), a rack of pork ribs ribs, time and beer, then you too can have some tasty ribs.

I'm thinking that my next venture will be a brisket.