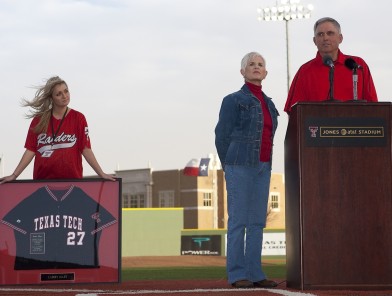 In a very special evening, former Red Raider coach Larry Hays had his #27 number retired with Texas Tech and Lubbock Christian. There are articles from LAJ's George Watson (with video) and DT's Mike Graham. I'm not going to say very much about Hays, and let the words and the video from the event speak for itself. I think Larry Hays was incredible for Texas Tech and he'll be an incredible asset to Texas Tech going forward. It's an honor to have your number retired and Larry Hays understands that:

"It’s about time I let everyone see what I’m capable of," said Karns, whose last victory was last May 18 against Baylor. "It’s too bad I had to wait so long but I’d rather have it now than never. Hopefully I can build off this and help the team achieve our goals and win some more games, and have a better season."