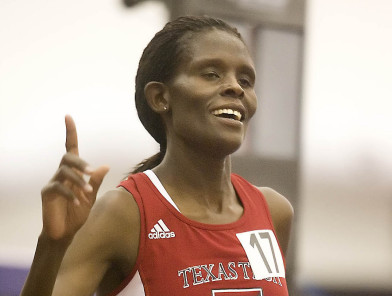 If you haven't been around all weekend, then you need to make sure and check out both DTN posts (here and here) on Sally Kipyego, who tied an NCAA record for national championships at nine and was a breath away from winning her tenth on Saturday. This may sound strange, but Kipyego may be the best best athlete to ever wear the scarlet and black and in a sport where she is either a winner or loser it's amazing that she's won nine national championships.

Congrats to Sally, an amazing athlete.

The DMN previews the Big 12 teams and picks a position that poses the biggest challenge, with the DMN staff picking quarterback:

What he brings: At 6-5, Potts has a stronger arm than Harrell, although he may not be quite as accurate or polished. He has completed 64.7 percent of his 85 career passes in backup duty the last two seasons. Ideally, coach Mike Leach would like competition at quarterback, but he conceded that the battle now is for the backup role. Potts' development will be crucial. Tech's third game comes at Texas.

FWST's Dwain Price updates Rylan's Reed injury, which was a ruptured patella tendon. According to Price, Reed is scheduled to be out at least nine months and Tennessee Titans' head scout had this to say about Reed:

"The boy was working hard and he was doing a good job and he just popped it," said C.O. Brocato, the Tennessee Titans’ head scout, who lives in Arlington. "He’s really a nice kid and he had a chance.

"But now I don’t know what’s going to happen. It’s a shame because he was doing a good job on everything."

And Ruffin McNeill describes the injury:

"It was like he was running in the Olympics and he was trying to lean [at the wire]," Tech defensive coordinator Ruffin McNeill said. "He’s too big to be leaning.

"When he put that leg out to lean and run through the line, all that weight came on one leg. It was weird."

LAJ's Jeff Walker discusses the returning players to the men's basketball squad. We're going to delve into each position once the basketball season ends, but this will certainly whet your appetite for now. Pat Knight talks about Mike Singletary's contribution to the team:

"He has just been a solid contributor to us," Knight said after the Missouri game. "He is only a sophomore. That’s the thing - that’s the thing that I really like. … This (tournament) is something he can build on, not just the performance (against A&M), but also, I think, (against Missouri)."

Very nice win and the combination of AJ Ramos (4.2 IP; 7 H; 3 ER; 2 BB; 6 SO) starting the game and Chad Bettis (4.1 IP; 3 H; 0 ER; 2 BB; 4 SO) closing it out worked out great for a series win against Nebraska (recap). I wasn't sure about using Bettis out of the bullpen, but it's obvious that his efforts helped Texas Tech garner both victories, the first game Saturday and yesterday's game. Leading the way on offense was sophomore catcher Jeremy Mayo (2-4; 4 RBI; 2 HR) had 2 home runs on the day and drove in 4 for the day, while Chris Richburg (4-5; 2 RBI) was on fire.

LAJ's George Watson's game story paints a picture of a team willing to take the ball and compete for the win, while head coach Dan Spencer sounds happy:

"The kids competed, and it’s nice because they’ve competed before and lost," Spencer said. "It’s nice to compete and get that kind of production and win and we can build on it from here. Until you get something done a time or two, you’re just going on faith and we all need to have a little faith. But once you get it done it should give you confidence you can finish a game and finish a weekend."