So, I leave to go watch the Mavs vs. Blazers during halftime, come back to the computer for what I thought was a halftime and the computer wasn't working. Completely shut down. Take a big breath, step away, and hope everything is okay. Didn't want to turn on. At this point, I decided to turn off the lights, let it go and hope that everything is okay in the morning. Turned on the light this morning and when my wife was using the computer earlier in the evening and when she pulled it foward, she accidentally unplugged it. To answer your question, yes, I'm not smart enough to check for that before I went to bed.

So, now I missed what was the greatest comeback and single-game performance of a Texas Tech player. 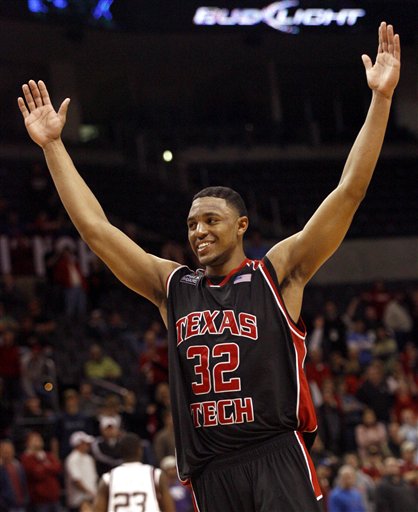 An incredible comeback, after scoring only 29 points in the first half, the Red Raiders, namely Mike Singletary, scored 59 points in the second half (boxscore). Tremendous effort from Singletary. You can go here to watch the press conference under G4 where Alan Voskuil and Mike Singletary talked about the win and Pat Knight was incredibly proud of his players.

"I have to say, these guys have got two things — they’ve got heart and they’ve got cahones. I think I can say that without getting into trouble," Knight said.

"That’s what this team has. I don’t care what the record is, this team has those two things. I’m proud of them. I can’t say anything more than that. To come back like that, against a good team like that just says everything about these guys."

"I was just in a zone, I think," the sophomore forward said. "My teammates kept getting me the ball. We didn’t want to lose this game. We didn’t want to go home. We kept fighting hard and getting stops and most of my shots just kept going in."

Pretty good stuff from ESPN's Mark Schlabach about how Singletary single-handedly outscored the Aggies and FWST's Lori Dann has a game story as well.

It is not official how many former Tech players will participate for scouts at Pro Day. More possible athletes include Harrell, offensive lineman Stephen Hamby, safety Daniel Charbonnet and receiver Eric Morris.

Last year, two scouts - one from the Carolina Panthers and another from the Dallas Cowboys - attended Tech's Pro Day.

Athletes will be expected to do the same drills done at the Combine: the 40-yard dash, bench press, vertical jump, 3-Cone drill, broad jump and the 20 and 60-yard shuttles.

Also, I didn't really have any place to put this, but here's some Fox34 video of Leach sitting in a big leather chair, talking about the hiring of La. Tech's Eric Russell as special teams coach and moving Clay McGuire to running backs coach.

LAJ's Don Williams reports that Pinkston running back Aaron Spikes has committed to Texas Tech bringing the total to 5 commits thus far for the Red Raiders. Here's Spikes and his current offers, as well as needing to get his grades up:

"I liked the environment,’’ he said. "I felt comfortable there. I just liked the whole school. … I’m a Texas boy, so I was a big fan of Texas Tech. I was a huge fan, following them this year.’’

Spikes had scholarship offers from TCU and Kansas State and said West Virginia, Penn State and Pittsburgh are among the other schools who have been recruiting him.

Spikes said he has a 2.8 grade-point average and a 15 on ACT. He plans to retake the latter, needing to score two points higher to meet freshman eligibility requirements.

And here's Aaron's profile which is on the left sidebar:

LAJ's George Watson and DT's Mike Graham had their game stories and head coach Dan Spencer does not sound happy:

"We reached (frustrating) a long time ago. We’re beyond that," Spencer said. "We have to go now, without putting somebody at risk as far as their arm, and do what we have to do. There will be a narrower bunch of guys out there."

"They’re not young guys anymore. These guys have 50 at bats in 15 games. It’s time to turn the page," Spencer said. "It’s going to get worse before it gets better if we don’t figure it out. We have plenty of talent. We have enough talent to compete with anybody and we’ve proven that. But competing and winning and finishing the deal are totally different things and we haven’t proven that yet."

Meanwhile, LAJ's George Watson looks ahead to the Nebraska series which starts on Friday.