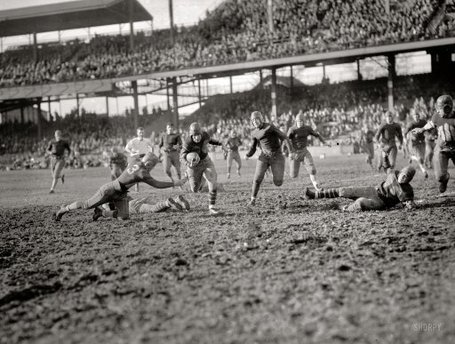 Hat-tip to djollie111 for the FanShot, per LAJ's Don Williams Captain Mike Leach and his staff received three more commitments this weekend:

Keller Fossil Ridge linebacker Brandon Mahoney and Carrollton Newman Smith defensive end Aundrey Barr said Sunday that they made oral commitments to sign with Tech. In addition, all-state defensive end Chris Knighton from Longview told his hometown newspaper that he has committed to the Red Raiders.

It appears that Mahoney still has some grade issues to take care of before he qualifies:

"They said that the scholarship committee was unsure if I was going to qualify,’’ Mahoney said, "But by the same token, y’all are quitting the race before it’s even finished. That pretty much tells me that they don’t want me. I took that as I don’t want to do it anymore. Half the time communication was bad between us anyway, and things were not as good as I wanted them to be. I’m not blaming them. Half of this is my fault as well.’’

Mahoney said it’s his understanding that he will qualify if he finishes high school with a 2.6 grade-point average. He said he has a 2.48 GPA now.

Here's the article from Rick Kretzschmar of the Longview News-Journal on Chris Knighton and here's Knighton on why he chose Texas Tech, his host for the weekend and some of his numbers from last year, his first at defensive end:

If Knighton signs with Texas Tech, he would join former Lobo Adrian Reese, who was his host this weekend. Reese completed his junior season this past fall, helping Texas Tech to an 11-2 record and a No. 12 national ranking by the Associated Press.

"Adrian just told me the lifestyle, how it would be and how hard it is," Knighton said. "I just have to keep working hard."

Knighton, who is 6-3 and weighs 235 pounds, moved from offensive tackle to defensive end this season. Knighton had 90 tackles, nine sacks and an interception in 2008, helping the Lobos to a Class 4A Division I state runner-up finish with a 13-3 record.

DMN's Chuck Carlton looks at the practice of grayshirting, including this bit about the recent success that Texas Tech has had with Lyle Leong and Adam James:

"It has to be the right kid," Tech defensive coordinator Ruffin McNeill said. "Some kids understand the fact that grayshirting is not necessarily a negative thing. A school's initial scholarship limit has been filled, but you'd still love to have them with that class.

"The kids we have grayshirted, it's worked well."

Don't forget that Omar Castillo grayshirted that year as well and I'm wondering if he would make a nice defensive end?

The Chron's Sam Khan, Jr. details the difficult process in high school players committing to one school and changing their minds. Friendswood's and Texas Tech commit Jacob Karam had this to say about the proess:

Friendswood senior quarterback Jacob Karam provides a good example. After committing to Texas Tech in June, he received an offer from Oklahoma, a school he long listed among his favorites, a few weeks later. Karam stuck to his guns and will sign with Tech on Wednesday.

"I think some players change their minds because, in their minds, maybe another opportunity is better," Karam said. "The biggest thing is for kids to choose the school that fits you and your personality."

DT's Alex Ybarra has a little more on Pat Knight's ejection on Saturday night and I think you've probably already seen enough of that, but there was this quote about how the team was trying to beat the Nebraska press that I thought I'd post:

"I think they were being too careless," Knight said. "We weren't attacking them. If you watch the team, we're trying to make these lofty passes. You can't attack the zone press like that. Teams press you because they want you to quit being aggressive."

I don't know how many passes were a result of the team trying to go over the top of the press, but that, by far, was the most frustrating thing about watching Saturday night's game. Knight addresses the problem, and what I'm wondering is why there is a lack of execution, at times.

I'm a little late to this, but apparently former Texas Tech head coach Bob Knight is interested in the now vacant Georgia coaching position. The biggest reason why this shouldn't happen is that RMK is done recruiting. If the reason behind the story is true, that he wants Georgia to come to him, then he wants the same thing with his recruits. Bob Knight is done recruiting, it was one of the reasons he resigned last year, and I cannot imagine that his attitude about hitting the road is changing. And if a guy is done recruiting, there's only so much that a Hall of Fame coach can do to coach up a team. Georgia Sports Blog has their take on the situation.

LAJ's George Watson in his blog Short Hops, has practice report #1 for the season. The first day that teams could practice was Sunday and here are a couple of snipets from Watson's post:

Overall, for about the first 6-7 innings, the Red Raiders played clean baseball, cleanest I’ve seen this early in practice in a loooongg time. I think they are miles ahead of where they’ve been in terms of being ready to start a season, and they’ve still got three weeks to get there. There was also a sense of no-nonsense on the field, that they’re there to work, and this seems to be a mindset that has come from the top down and quickly sunk in. I think some people call that hungry.

Pitching: Aside from one pitcher, the mound work by the Red Raiders was solid. Senior right-hander Miles Morgan, who has battled for two years to return from 2007 shoulder surgery, threw two solid innings, allowing no runs or hits and just one walk in seven batters faced. Senior right-hander AJ Ramos labored through two innings (although I later found out he was sick) while returning from reconstructive elbow surgery, allowing a pair of runs on a hit and two walks with a strikeout. Nate Karns, a junior-right-hander, was solid, allowing a run on three hits but no walks (his biggest problem last year) with four strikeouts. Junior right-hander Paul Gonzalez, also battling back from injury, and freshman right-hander Colton Farrar each had two scoreless innings. Sophomore Jordan Stern had two scoreless innings at the end of the scrimmage. The only bad outing came from sophomore left-hander Kenny Matthews. the Blinn JC transfer allowed seven runs on six hits and two hit batters in one-plus innings.

Pitching was the downfall of the team last year and hopefully Spencer and Co. will get that turned around. I also love the idea of playing small ball with this team as it was very hit-or-miss with last year's team scoring runs.

"I feel great," Spencer said. "I think our guys are excited. It's an exciting time, I think they're all looking forward to it. I'm excited to go. We just have to get sharp. We're doing a lot of fundamental work. We're still getting used to playing with each other and figuring out some combinations. We're just getting ready to play."