How About That:  I'm as surprised as you guys about this win.  We've talked about how this team is more athletic, and I think if there was ever a indication of that, it was last night, matching punch for punch with what I thought was an incredibly athletic Washington Huskies team.  It was pretty cool that the Red Raiders got to storm the floor twice, and even Storming the Floor took note.  I'll have some Post Game Thoughts later this morning.

Game Stories:  Lots to choose from this morning (LAJ's Courtney Linehan and a notebook and DT's Mike Graham).  PG John Roberson is proud of the way this team has come together:

"I’m just so proud of these guys," point guard John Roberson said. "We’ve got a lot of new players on this team, and to come together this quickly, I’m shocked."

And Roberson talks about the situation leading up to his stealing an inbounds pass that sealed the overtime win:

"In the huddle, the coaches were telling us to go 2-3 (zone)," Roberson said. "I was like, ‘No, we should go man. Pat had confidence in me, he listened to me and we ended up going man.

"Everybody did a good job denying their man the ball, so I just read his eyes and knew no one was open. Nobody was open and I knew there was a guy up top and I knew (the ball) was going there and I just got a good break on the ball and ended up laying it up."

"The students and the fans were incredible tonight," Knight said. "There’s no way we could do it without them. I just want to say thank you to them. I hope this team gained their respect and excitement even it wouldn’t have gone our way. I think these guys deserve to have crowds like that every night."

And SF Mike Singletary knows that this team cannot be satisfied:

"I think our challenge is to just not be satisfied," Singletary said. "TCU beat us last year, granted we’re a different team this year. We’ve got to go into TCU and come out and just not have a let down."

In Linehan's notebook, she said that the student trainers went around the dorms handing out flyers to students about last night's game and PK appreciates their efforts:

On Thursday the game ball went to four managers who over the course of three days went door to door in campus dorms delivering flyers advertising the game against No. 12 Washington. Coach Pat Knight said after Tech’s 99-92 overtime win that those managers, and the fans they helped bring in, made a major difference in the game.

"I’m not dumb," Knight said. "I coach basketball in a football state, so you get worried in the preseason what your attendance is going to be."

Knight Finding His Way:  DT's Alex Ybarra writes about how it takes time for any coach to mold his team in that coache's manner and Pat Knight says that it takes time

Knight agreed: "I think each year with those guys, it’s gotten better. It’s not like we’re buddies and we sing kumbaya. There are a lot of days they don’t like me. But from a coaching standpoint of knowing what they can do basketball-wise and knowing what I want, I think we’re on the same page."

And PK also makes a call-back to certain girlfriends and not being satisfied with a win:

"Eighteen to 21-year-olds and everybody," he said, "people like (the media) on the internet talking about how great they are, and they read it and then their mom reads it and their dad reads it. Oh yeah, that and their beautiful girlfriends. You gotta worry about all that."

Washington Husky Links:  Seattle Times' Percy Allen with a UW perspective of last night's win . . . TR's RRR with some post-game thoughts . . . DT's John Arnold with some great video after the game (it looks like he's having a great time) . . . DT's Edmund Rostran with a tremendous recap of the game with quotes from UW head coach Lorenzo Romar about how Texas Tech needs to get behind this program, and post game quotes from Mike Singletary (this is professionally done and kudos to Rostran for some good work):

This is a Keeper:  LAJ's Don Williams writes that our Captain Mike Leach can now swing his sword, literally: 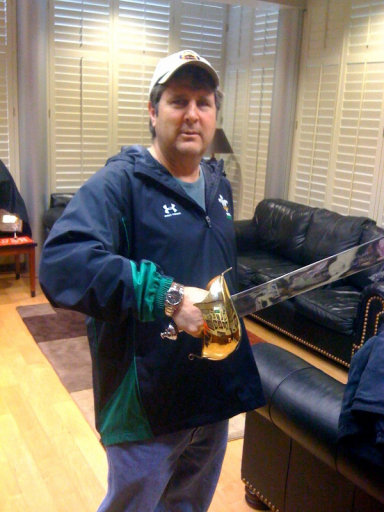 Texas Tech football coach Mike Leach on Thursday received gifts from Houston boosters, including this sword similar to the cutlasses used by pirates of legend. (Provided by Texas Tech) via images.morris.com

"It was funny because we were having a bit of a firm conversation with the team," Leach said, "and then all of a sudden these guys come in with swords and watches and a big double-T. It’s incredibly thoughtful, especially all the way out there in Houston where we’ve got incredibly loyal fans and alumni. It’s great to see these guys, who are huge friends besides."

Congrats to Winn and Carter:  RT Marlon Winn and RG Brandon Carter have been invited to play at the Pro Football Hall of Fame Texas vs. the Nation Challenge, which is set for 1:00 p.m. on February 6, 2010 at the Sun Bowl in El Paso.

Miscellaneous Links:  Burn Orange Nation talks with Corn Nation about the Big 12 Championship Game (lots of good stuff here) . . . the DMN has their All-Big 12 team . . . Rivals.com's Jamie Newberg with an interesting look at recruiting by region and by state in comparison to being drafted by the NFL . . .