The Saga of Mike Leach :: Something is Rotten in the state of Texas Tech University

Share All sharing options for: The Saga of Mike Leach :: Something is Rotten in the state of Texas Tech University

When this story first broke, I was convinced that there wasn't one person who had the ability or authority to suspended a head coach for alleged actions against a player.  There are so many things wrong with how this entire scenario.  The referenced Shakespeare quote from Hamlet is often misquoted, "Something is rotten in Denmark," but the actual quote that Marcellus spoke was, "Something is rotten in the state of Denmark."  What my Texas Tech English degree taught me is that Marcellus was referring to the politics of the actual state of Denmark and not Denmark itself, which makes the actual quotation even more appropriate to the situation at hand.  There is no doubt in my mind at this point, that something is rotten in the state of administration of the Texas Tech University system.

Follow me after the jump for thoughts on the fact that there does not appear to have been any notice, video of the "shed" and "electrical closet", considering if Adam was mistreated, following the money and your call to arms.

Yesterday, Mike Leach, through his attorney, Ted Liggett, filed an injunction (PDF) against Texas Tech University, which, if successful, would force the Captain to be able to coach on Saturday.

This makes no sense whatsoever.  When I opined on Monday that the crux of Leach's argument would be that there was no due process, no notice and necessary hearing regarding his suspension.  Leach's injunction alleges that he was given no notice of his suspension and the attached Exhibit "A" of the injunction is clear that athletic director Gerald Myers and University President Guy Bailey that no notice was given and that the suspension was part of the 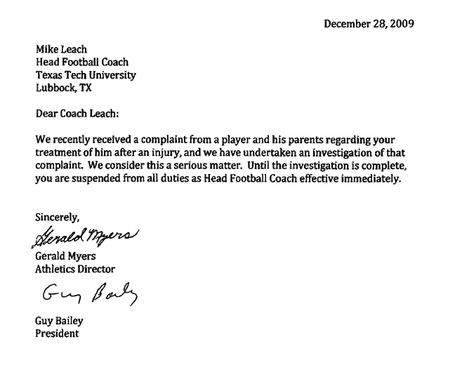 "Until the investigation is complete" seems to imply that there was no notice and no opportunity for Leach to refute Adam James' claims.  If that's the case, then I get the feeling that the University really screwed up this entire ordeal.  It's one thing to go through the proper channels to suspend a coach, but that just didn't happen.  It's also being refuted by Liggett that Leach was given no opportunity to apologize in order to keep from being suspended (watch the video below).

The singular conclusion that I draw from this entire ordeal is that there is absolutely no communication between Myers and Leach.  If Liggett's claims are true, that Leach was given no notice of the suspension other than the letter above, that Leach given no opportunity to apologize in order to continue coaching, then what you have here is nothing more than a power play.

No Notice, So What

So you're probably thinking that if there was no due process, what's the big deal, the university was erring on the side of caution, especially when there was the allegation that Leach mistreated a player.  This is where I think the James' family comes into play.  I would imagine that Craig James made contact with Myers and essentially gave Myers and the university an ultimatum.  Again, this is just my theory and I have no basis for this other than putting two and two together, but I would imagine that James made the threat to Myers that either he suspends Leach or he goes public with the entire matter.  Myers didn't want to hassle with an actual investigation to make a determination as to whether or not Leach was actually guilty of the claims that the James family made and suspended Leach indefinitely.  The problem here is that Myers erred not on the side of caution, but on the side of a parent who was upset that his child allegedly that he was being mistreated.

This is where this entire story makes me incredibly upset.  The initial allegations, the allegations put out by the James family was that Adam was forced into the "darkest, tightest spot" and into an electrical closet.  I've posted video from KCBD's NewsChannel 11's Pete Christy and Liggett reviewing the "shed" in question and the alleged electrical closet.

After seeing it for myself, there is nothing about either location that would lead me to believe that Adam was forced into a place that was unsuitable because of his concussion.

I do find it interesting that Liggett and Christy were allowed access to the athletic facility, which makes me think that there's someone there at the athletic department that still believes that Leach has been wronged in some manner.

None of this makes sense to me.

Did Leach Mistreat the Concussion?

Craig claims that Adam was mistreated due to the concussion, but I'm still trying to figure out how he was mistreated.  From the video linked above, it again seems if that Leach did anything but mistreat Adam as far as the concussion is concerned.  If Leach did anything, it's that he embarrassed Adam by asking that he go to the shed and to the media room.  I simply do not understand how asking that Adam be placed in a room that was bigger than my dorm room at Texas Tech be a mistreatment of Adam's diagnosis.  Being embarrassed and being mistreated are two completely and separate issues.  If the worse thing that Adam was asked to do is stand for a few hours (something that he would have probably done had he not needed to be in the sunlight while walking around the field) then the allegations that were initially reported are completely and totally inaccurate.  Someone leaked those initial allegations and it was either the university or the James family.

There's no question that one of the biggest issues about this entire situation is that Leach is owed a $800,000 bonus tomorrow should he still be the head coach.  Make no mistake that this is about money, on both sides of the fence.  As more and more facts come about about this case, and the more that those facts refute the initial claims of James being in a dark, tight spot or an electrical closet, the more I am convinced that Myers and the university are looking for for an excuse and they found it, just in the nick of time.  Depending upon the outcome of the hearing today, I can completely envision a situation where if Leach wins at the injunction hearing and is able to coach on Saturday, the University will not terminate his contract because there's little to no leverage and as of this point, there will be no "cause" for terminating Leach's contract.  If Leach loses at the injunction hearing this morning then the university terminates his contract, with cause, they do not have to pay him his $800,000 bonus nor do they have to pay him the $1.6 million owed ($400,000 for each year remaining on Leach's contract), another lawsuit filed by Leach for the disputed money and another head coach is hired at Texas Tech.

If Leach is allowed to coach on Saturday, I believe that one of two things will happen, and this is where the power play will occur.  The next week or so will tell us quite a bit about who is in charge of the university.  I think on one side, you have Myers and Bailey who would like nothing more than to see Leach removed as the head coach at Texas Tech and on the other side you have the Chancellor Kent Hance, who negotiated Leach's contract last year, is leading the charge to Texas Tech becoming a Tier 1 university and from what I know, is one of Leach's biggest fans.  At the end of the day, much like Hamlet, there will be casualties.  For those of you who have never read Hamlet, at the end of the play you have Gertrude, Claudius, Laertes, and Hamlet's dead bodies laid out in the final scene.  Although I do not expect any corpses, I do expect something, metaphorically speaking, of a similar result.  If Hance wins out, then I think that you'll see a tremendous shake-up in the athletic department, including Myers being politely asked to resign at some point during the season and there will be serious questions about Bailey's involvement in this entire matter. If Myers and Bailey win out, then I shudder to think about the direction of the university.

This Is Your Call to Arms

I've tried to be the blogger that tries to be fair and honest and report what's happening rather than be overly opinionated, but the truth of the matter is that this feels like Leach is getting jobbed.  If you believe the same way, I am asking that each of you send an email to Chancellor Hance because I do believe that he is the only person with sufficient power and common sense to make sure that the right thing is done, which in my opinion is that Leach should be reinstated, the allegations against Adam are properly investigated, and then a decision is made as to whether or not Leach acted appropriately.  I would also ask that you copy me on your email, or post your email in the comments below.  The appropriate email addresses are as follows: