Military Shout-Out:  I got an email last night from Paco, who is serving in our military and stationed in Baghdad along with Kris and Mark.  They asked if I could post a picture of all three of them and I'm happy to oblige. 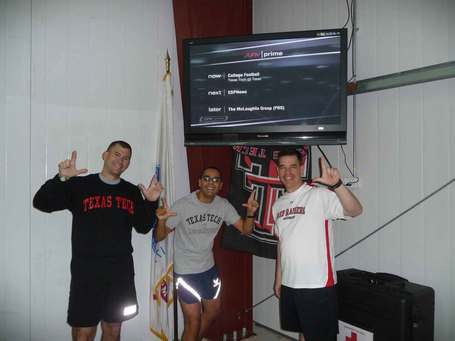 Thanks for you service gentlemen and all of us at DTN are glad that we can help keep you informed about your Red Raiders.

"I think each and every week they’ve progressed mentally and physically," cornerbacks coach Brian Mitchell said Wednesday. "We’ve been lucky. We’ve been healthy. We lost LaRon for a little bit, but D.J. (Johnson) has done a great job in learning and getting his body ready to play every Saturday."

And S coach Carlos Mainord on his safeties:

"They’ve come along," safeties coach Carlos Mainord said. "It was a shame that both of them missed playing time, missed two or three weeks apiece, and got back in. They’re getting better and the more they play, the better they feel and the more natural they are out there. I’m pleased with what they’re doing right now, but they’ve still got a long way to go."

Follow me after the jump for more news, notes and links.

Freshman Sophomore Focus:  LAJ's Don Williams is featuring either a redshirt freshman or a player not on the two-deep roster and up this week is DT Myles Wade. DT coach Charlie Sadler had this to say about Wade's progress:

"Probably the thing he’s progressed the most on is his pass-rushing technique and abilities," Sadler said. "He’s still working on the run fits, trying to improve on a daily basis on that. But there’s a marked improvement from the time he got here to now. A lot of that has to do with the fact he’s learned the calls and he’s not as hesitant as he was early."

McNeill Reflects:  FWST's Dwain Price has an excellent interview with DC Ruffin McNeill as he reflects about 2 years ago when he was named as the defensive coordinator just a few days after the Oklahoma St. loss:

"Oh my God that was a wild game,'' McNeill said. "(The coaching change) was a rock and a hard place at the time, because it was a midseason change, but I'm very blessed for two reasons.

"One, that coach Leach had confidence in me to name me defensive coordinator. No. 2, the (defensive) staff of Charlie Sadler, Carlos Mainord and Brian Mitchell, from day one we worked together as a group.''

Quarterback Uncertainty:  DT's Alex Ybarra and LAJ's Don Williams write that there's still uncertainty at the quarterback position, but it appears that it will be between QB's Taylor Potts and Steven Sheffield.  Here's Williams:

The two got all the snaps in the 11-on-11 team period of practice Tuesday and Wednesday, the Avalanche-Journal learned. The breakdown Wednesday, the last heavy practice day of the week, was about two-thirds to one-third in Potts’ favor, which is typical for how Tech coach Mike Leach breaks down the snaps between his No. 1 and No. 2 quarterbacks.

"We’re kind of into this game-time decision stuff," he deadpanned. "I think it’s very suspenseful and fun for everybody and so we’re looking forward to it. I’m on the edge of my seat waiting to see myself. It took us all the way until halftime in a way, so we don’t want anybody leaving early."

So there you have it, your guess is as good as mine.

Oklahoma St. Cowboy and Big 12 Links:  NewsOK's Brandon Chatman writes that losing S Victor Johnson is a huge blow for the Cowboys and with how the players appreciate the simple scheme provided by defensive coordinator Bill Young . . . ESPN's Tim Griffin picks the Big 12 this week and picks the Cowboys to win . . . TulsaWorld's Bill Haisten with an OSU notebook and reflects with head captain Mike Leach about his time in Norman (pretty good article) . . . NewsOK's Mel Bracht interviews ABC announcer Craig James (James is pretty honest about not always appreciating the off-the-wall comments by Leach) . . .

Ready to Go:  LAJ's Courtney Linehan writes that the men's basketball team is hungry and is expecting a fight from the South Dakota Coyotes:

"Last year we always thought we were the underdog, and most people did," Singletary said. "We know we can’t take anybody for granted."

Fan Support Needed:  LAJ's Courtney Linehan writes that both basketball programs are looking for support from the fanbase and I've always wondered what the rational is for students or fans that don't go to the games.  I know, the teams haven't been good, but being a fan, at least to me, isn't always about whether or not a team is good or bad.  If I lived close to Lubbock, I'd probably drive my wife crazy with constant attendance to Texas Tech events.