Q & A with Corn Nation

Share All sharing options for: Q & A with Corn Nation 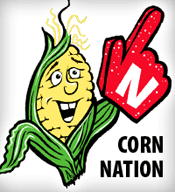 Thanks to the fine friendly folks over at Corn Nation, DTN and CN have traded questions and answers regarding tomorrow's game (see all sorts of game-day coverage here). Enjoy.

I asked this same question of TB of Bring On The Cats and I'm curious as to what you believe to be the biggest change in philosophy of Bo Pelini from the Callahan regime? Name one thing on the field and one thing off the field.

Husker Mike: I about lost my lunch on Monday night when Jon Gruden started praising Bill Callahan for his teaching ability. Maybe that was true as a position coach, but all that when out the window when he became the man in charge. Teaching never really happened; Callahan just pushed as much as he could of his system, and never worried whether it was ever mastered or even understood. Pelini on the other hand is just the opposite; he wants players to know and understand their roles on the team and what they are doing right (and wrong, if you've ever caught him on the sidelines). Last year, he tried to get to fancy against Missouri and the team got slaughtered. He simplified the defenses the rest of the year, and the team finally started to get the concepts. On the field, he's concentrated on making the team more agile. Look at Ndamukong Suh now; he wouldn't even be considered in the NFL draft if Callahan was still at Nebraska. They wanted players bigger, and he wouldn't be in position to run down quarterbacks. He certainly wouldn't have been agile enough to be able to jump up, deflect, and intercept passes. In fact, that's a skill that Pelini had to teach the defensive linemen when he arrived.

JLew: Seems like an odd thing to ask TB, what does he care about Callahan and Pelini? I kid I kid. Can I say everything? Because it seems like everything in the program is different. I was going to talk about player development but Mike got to it first. So I'll say team toughness. There is a toughness that Bo's teams have taken from him, which the Huskers were missing under Callahan. Down in and to Missouri, in a cold rain the Huskers never gave in. That's not the case before Bo. Also Bo has the players believing they can win games.

Corn Blight: There's night and day difference between the two. Callahan had not a clue about how to manage people which is a requirement as a head coach. He has poor communication skills, micromanages instead of allowing others he's hired to do their jobs, and would give you up without ever being tortured. Bo Pelini is the exact opposite.

2. The Nebraska defense has been stellar all year, do you think there's an inherent advantage in playing a spread team like Missouri prior to Texas Tech and do you expect Nebraska to carry-over the same type of defensive scheme and game-plan this week?

Husker Mike: Well, it's better than playing a triple-option team, but Tech does things quite a bit different than Missouri. I do want to see how Tech tries to defend Ndamukong Suh with those wide splits. Missouri struggled with double-teaming Suh and Jared Crick, and forcing Blaine Gabbert to scramble with a bad ankle. Whichever Tech quarterback is going to need to be ready to either scramble or fire the ball, being careful to not let Suh get his mitts up.

JLew: Spread is such a ubiquitous word to describe those offenses. Pelini said this week that they are different, and so defending them is different. I think covering the Missouri receivers will be a good experience for our defensive backs though.

Corn Blight: I think there's a benefit to it, yes. There are enough similarities between Missouri's and Texas Tech's offenses that the coaches can be consistent in how they teach defense and make sure that the overall philosophy is intact before introducing the nuances of the week. Repetition is the key to getting something down so that you're no longer thinking about what you're doing, it becomes instinct.

Not only that, but playing against Missouri's spread allowed us to get more defensive backs experience on the field. I don't think you can say enough about the Husker secondary. They're all playing very well right now.

The same defensive scheme will apply - Nebraska will expect the front four to contain the run and put pressure on the quarterback. This will allow the back seven to be more flexible in what they're doing, whether it be cover or blitz.

One key to the Husker defensive line - they're not just blowing up the field. This is why you're not seeing high sack totals. Note that Suh has a lot of pass break-ups, but not a lot of sacks. They're plugging holes on the inside, while the ends are containing on the outside, not just pushing up the field.

3. NU has been more successful on offense than people give them credit (15th in the nation in scoring offense), what's the biggest reason for the success of the offense?

Husker Mike: Most Husker fans wouldn't agree with that assessment; Nebraska went 7 quarters without a touchdown against Virginia Tech and Missouri. Much of those stats were put up against Sun Belt teams, so you have to take those stats with a grain of salt. You did see a spark late against Missouri; the key is getting wide receivers like Curenski Gilleylen and Niles Paul deep to open up lanes underneath. That opens up tight end Mike McNeill and opens up the running game as well.

JLew: I think the offense has played well. Lee has struggled some on the road, and against better competition. But one game was against VaTech in Blacksburg, which was Lee's first start on the road and the other was in the driving rain in Columbia so we'll see how he plays as the season progresses. Watson has said that the offense will take what the defense gives them. Being adaptable has helped. Also NU has avoided turnovers on offense.

Corn Blight: Opposing fans keep expecting us to revert back to the glory days and run the ball a lot more than we do. I think a lot of Husker fans have that expectation as well. However, the versatility of Nebraska's offense is what makes it successful. If the defense stacks against the run, the pass is available. And vice versa.

Zac Lee has been pretty accurate at home, and it has been his accuracy that's hurt him in road games, not a lack of receivers being open or there being a lot of pressure.

4. Normally, Ndamukong Suh deserves his own question, but Suh's gotten so much press, tell us a bit about some of the other defenders who aren't getting as much credit because of the dominating presence of Suh?

Husker Mike: Jared Crick doesn't allow you to triple-team Suh. On one play last week, the Tigers tried to double-team Crick...and couldn't until they finally had to haul him down for a holding penalty. Another guy to keep an eye on is cornerback Prince Amukamara. He dropped a pick in the monsoon last week, and he's been stout on run defense as well. Dejon Gomes and Alfonso Dennard were inserted last week and are proving to be quite the playmakers back there as well.

JLew: I'd agree with Crick. The young linebackers have been playing well, with Dillard in there as well. As a whole the defense has been tackling well, they were lights out against Missouri.

Corn Blight: How the hell could you guys not mention safety Larry Asante? He's played very well this season.

5. Last year, Joe Ganz was outstanding at moving the chains and the Nebraska receivers did a tremendous job of just taking what the defense gave them, can you envision Zac Lee having a similar performance this year or do you foresee a different game-plan offensively?

Husker Mike: With injuries at running back, I think it's going to be almost a necessity for Zac Lee to keep the chains moving. Nebraska offensive coordinator Shawn Watson is a firm believer in taking what the defense gives you, and last week, that almost killed Nebraska. In that monsoon, the Tigers dared the Huskers to throw the ball, essentially using the weather as an extra 3 defensive backs. And throw they did, with miserable results for the first three quarters until the rain let up a bit.

JLew: I don't think as much. The game of keep away was really dependent on NU protecting a suspect defense. I think NU will take some shots down the field, and let the defense cause havoc.

Corn Blight: Well . . . I don't see much difference in the game plan, but I wouldn't expect the same performance. It'd be nice, but you have to give credit to the Ganz/Swift/Peterson threesome last season. Swift and Peterson were incredibly dependable and great at getting open. I'm not sure we have the same kind of receivers now. Do I sound a little skeptical about our offense.…. yeah, I do. That's because I am. Put it this way - we have a new quarterback with a lot of potential whose performed well at home against suspect competition. We have a bunch of decent receivers, but until Niles Paul's big play performance last week, none of them had particularly shown greatness. We have one of the best running backs in the Big 12, but our offensive line is only decent, not great. His backup, Rex Burkhead, is out "for a while" and had done a good job doing the tough running, but we now need to find a quality backup. There's a lot of reasons to be skeptical about the Husker offense. If they can sustain drives against Tech this weekend, more of those questions will be answered.