For No Reason Except That I Think It's a Great Photo 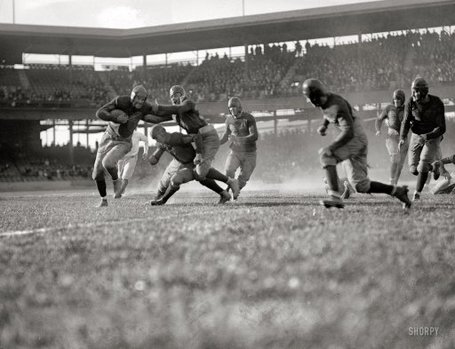 LAJ's Don Williams writes that Texas Tech offered a scholarship to Carrollton Newman Smith's defensive end Aundrey Barr. Apparently, the game of football is new to Barr as his senior year was his only year to play, gaining 31 tackles, 10 TFL and 14 QB pressures. Barr's high school head coach, Paul Ressa, had this to say about Barr's recruiting process:

And about Barr's development:

"He was always here, but always kind of dinged up with his basketball knee surgery and stuff like that,’’ Ressa said. "When the (senior-year) film got out and I got his highlight tapes cut up, it didn’t take (colleges) long.

"When I got here (February 2007), he was under 200 pounds. Now he’s 234 and can run. (His development has) been fantastic. He has a great motor, great attitude, good in the locker room. Everything’s positive. Just a great kid.’’

In looking around the DMN CNS page, Barr is currently listed on the basketball roster as only weighing 210 pounds, although his coach stated above he's put on weight. The other interesting thing is that he's currently leading his team in rebounding, which hopefully means that he's an athletic guy and fairly light on his feet and that type of athleticism would translate well playing on the edge at defensive end, just so long as he's got some speed to make some plays. And just in case you were wondering, his team is 25-2 for the year, so it's not as if he's playing on an awful team.

ESPN Big 12 Blogger Tim Griffin checks in with the best and worst of the Big 12 in the Superbowl and there are a few Texas Tech appearances, including Timmy Smith and Wes Welker, although this may be my favorite:

4. Donny Anderson (Texas Tech) levels the "The Hammer" -- Before the game, Kansas City defensive back Fred "The Hammer" Williamson vowed that he would knock out a Green Bay player from Super Bowl I with "his hammer," a well-placed forearm shiver. Instead, Green Bay running back Donny Anderson, a former Texas Tech player, caused a concussion for Williamson when his knee collided with Williamson's head early in the fourth quarter of Super Bowl I. Williamson also suffered a broken arm on the play when his teammate, linebacker Sherrill Headrick, fell on top of him.

LAJ's Jeff Walker writes that the Red Raiders are still trying to eliminate mistakes and head coach Pat Knight felt that his team is competing:

"I thought we competed really well. I saw a lot of good things," said Knight, whose team will host Nebraska again today at United Spirit Arena. "Obviously, though, we didn’t get the win, so there’s still room for more improvement. We were in the game until the end, and really, I think we’ve competed well in all three road games in the conference. We’ve just got to fix the mistakes."

And there's more on Trevor Cook's back injury, and trainer Jon Murray had this to say:

"It’s better than it was," Murray said. "It flared up again when he played against Texas. This is something that has bothered him in the past and we just haven’t gotten him back to where he was before. … He’s really frustrated. He wants to play. He’s come in here and said, ‘Jon, just let me play through the pain.’

"It’s not that simple, though. It’s not the same as when guys like (Michael) Prince come in and say that. His deal with his foot is totally different than dealing with the back."

From personal experience, my wife had a similar back issue to Cook's and she's only in her mid-twenties, she hated the fact that she had back trouble, but I finally convinced her to have surgery and it was the best thing that she ever did. I'm not trying to offer medical advice, but if going under the knife is an option for Cook and his back is in as much pain as it is, then I hope he at least considers this option, not necessarily for basketball, but to be able to do things later in life.

Jeff Walker's blog Above The Rim has a quick note from practice and perhaps Roberson's luck will continue tonight.