Share All sharing options for: Texas Tech Tuesday Morning Notes - We Can Stay In Any Game Edition

"He’s tough. He’s physical. He’s kind of an ornery son of a gun,’’ Jinks said. "That’s what you need to be to be a good offensive linemen.’’

The athleticism’s there as well. Jinks said Goetz has shot in the mid-70s on the Steele golf team and even shows a cannon arm.

"When we go through (game-situation drills), we bring him in to play quarterback (against) our prevent (defense),’’ Jinks said. "We let him heave it, and he throws the ball 65, 70 yards.’’

There's also some additional details about defensive tackle Myles Wade in the article as he still has a couple of courses to take in the summer in order to be eligible. Remember folks, he took the entire year off last year and it's going to take some time for him to get back into the groove of things. In any event, here's Wade on Lubbock and the coaching staff:

"I love the city. I really like Lubbock," Wade said. "Another thing that I liked and really appreciated was the honesty and character of all the coaches. They were all genuine. They all made me feel like it was a home and not necessarily just a school."

Hat-tip to WALKERMAN for the FanPost.

SportingNews' Vinnie Iyer says the smart money is would be for any team to draft Michael Crabtree:

If it were any other team but Detroit drafting at No. 1, Crabtree would be the no-brainer first-overall pick. In a fun alternate reality, where the Lions could afford to invest in both Johnson and Crabtree, they would just take their chances with a journeyman quarterback who simply could get the ball to the two elite receivers. With so many needs and a history of whiffing on receivers, however, the Lions don't have the luxury of taking Crabtree. Still, taking a top offensive tackle would be better than either Stafford or Sanchez.

DT's Adam Coleman writes this morning that the team is looking at the glass as half-full rather than half-empty. Freshman center Robert Lewandowski says that he's confident that the Red Raiders can stick with any team:

"We can stay in any game," he said. "I think we already knew that to begin with. I've said it before, just gotta play all 40 minutes. Playing on turnovers is going to kill us every time, and we still made a game out of it. If we can take care of the ball and play our defense, we have a chance to win any game we play."

"I think it helped our confidence a lot because earlier in the season, when we got down, we would kind of just take our foot off the gas and just kinda like give up," he said. "I think we stuck with it and we persevered. We made a little run in the second half, we got it to seven. I think that all the guys seeing that we can play and we can come back from a big deficit, I think that gives us a lot of confidence going into the next game." 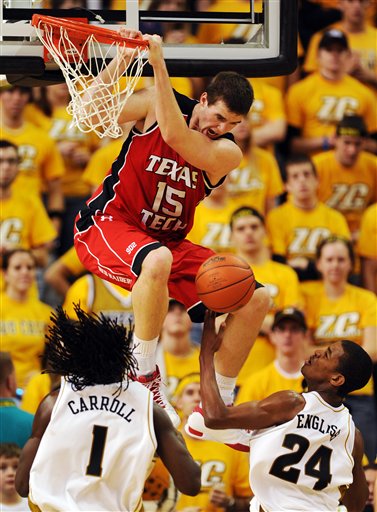 From the Topeka Capital-Journal, Robert Lewandowski is starting to make a name for himself in the Big 12:

Robert Lewandowski, a 6-10, 240-pound freshman Texas Tech recruited out of Blue Valley West, is beginning to contribute more. Against Missouri on Saturday, Lewandowski scored a team-high 16 points after drawing his sixth start.

"He's getting better with each game," Tech coach Pat Knight said. "It's just nice to have a kid that size that we'll have for four years. Usually we've had to get our size from the junior college ranks, and that means we're only getting a kid for two years. He's already been able to play well and help us as a freshman."

And Pat Knight believes that every game is a must-win game, no matter a team's record: